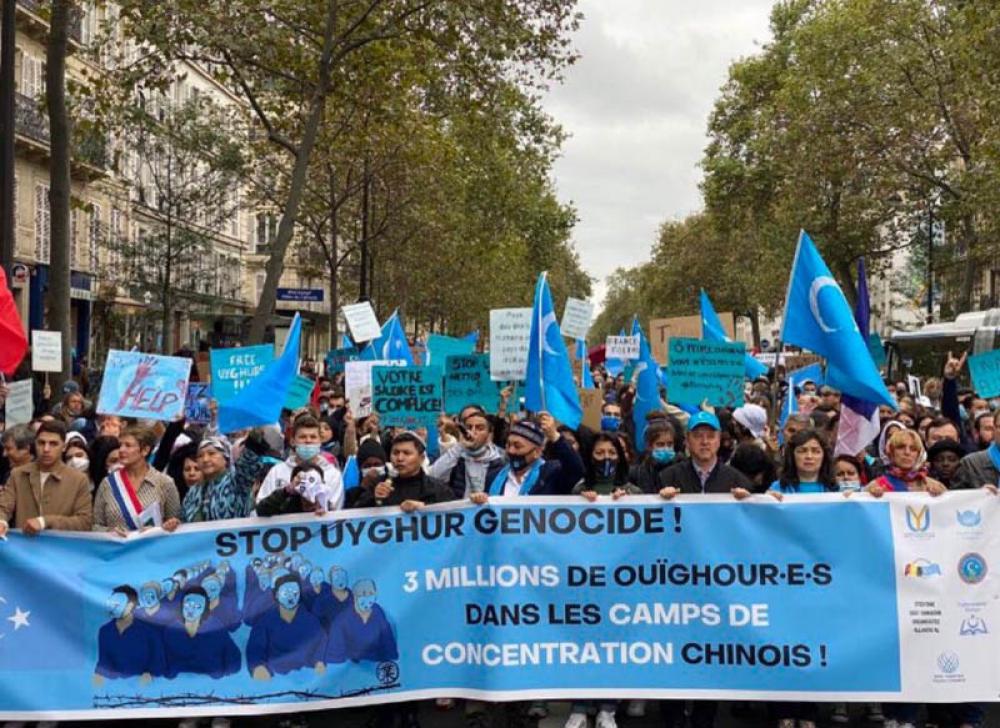 Paris:  More than 2000 people gathered in Fench capital Paris on Saturday to raise their voice against the ongoing genocide of Uyghurs in Xinjiang by the Chinese Communist Party.

Organised by multiple Uyghur organisations, including the World Uyghur Congress and the Uyghur Institute of Europe, the protest saw the participation of hundreds of Uyghur youth who had traveled from various European countries as well as public figures like Raphael Glucksmann, MEP and French actress Lucie Lucas.

The protestors shouted slogans like ‘genocide in progress’ and ‘Save the Uyghurs’ and carried banners and East Turkestan flags.During the speeches, a call was made to the international community to cancel all agreements between the European Union and China as well as to boycott the Beijing Winter Olympics 2022.

Further, many speakers denounced the complicity of multinational fashion companies like Zara, Hugo Boss and Uniqlo , who continued to buy products produced by forced Uyghur labour.

Earlier, the same day,  the NGO ‘SumofUs’, in association with the World Uyghur Congress, held a protest outside the flagship ZARA store in Paris’s Champs-Élysées, against the brand’s sourcing material from China that used Uyghur labour.

This protest, timed  to coincide with the Paris Fashion Week, was intended to draw the attention of other fashion brands to stop sourcing commodities from Xinjiang.

Assal Khamraeva -Aubert, the World Uyghur Congress’s representative in France and co-organiser of the event, urged the French government to consider stopping imports of products from Xinjiang that were produced using forced Uyghur labor.

She added that the WUC hoped that apart from the international community recognising Uyghur genocide, which would be a ‘symbolic victory’, it was also important to have an impact at the “economic level’ .

Ibrahim Bechrouri, campaign manager of SumOfUs warned that similar protests would be organised in other European capitals, including in Spain.