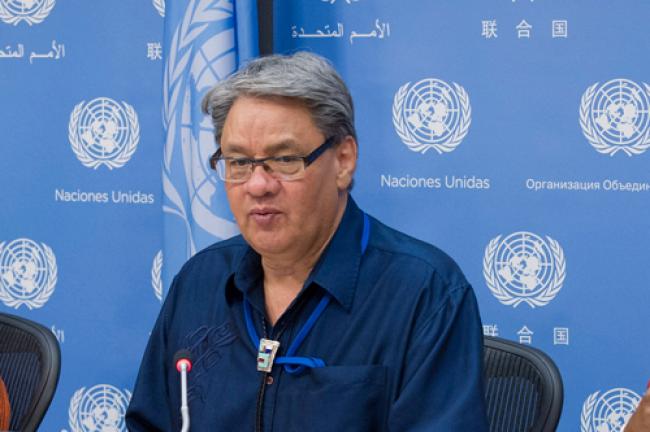 New York, May 23 (JEN): Calls for the full, equal and effective participation by the worldâ€™s 370 million indigenous peoples in the upcoming, first-ever World Conference devoted to the realization of their rights gained momentum during a two-week annual forum at United Nations Headquarters.
The North American Representative to the UN Permanent Forum on Indigenous Issues, Grand Chief Edward John, said the World Conference on Indigenous Peoples – to be held from 22 to 23 September 2014 – was the underlying and recurring theme of the 13th session of the Permanent Forum, which is scheduled to conclude on Friday, 23 May.
Indigenous speakers had implored Governments and the UN itself to respect their right to full, direct, equal and effective participation throughout all stages of the preparations and in the high-level event itself, in line with the General Assembly’s so-called “modalities resolution” in 2012 setting out arrangements for the World Conference.
“We have called on the [Assembly] President to act on the modalities resolution and be clear and decisive, “Chief John told reporters Thursday afternoon. “Time is of the essence.”
The 13th session of the Permanent Forum had focused on: the theme of good governance; Asia, home to two-thirds of indigenous peoples; and the global development agenda beyond 2015; as well as the arrangements for the September World Conference.
In response to a question about challenges facing indigenous peoples, Chief John said that the situation of the world’s 370 million indigenous peoples whether they were in Africa, Latin America, or Asia, North America or in the Arctic are very similar.
“Part of the challenge is to have State participants understand the nature of the dilemmas that we see in all of the regions of the indigenous peoples around the world,” he said. “The common message has been we need to improve the social-economic conditions of the indigenous peoples and active measures needs to be taken to do this.”
“The biggest challenge remains the impact on development, particular of indigenous peoples’ land and territories” reflected in the UN Declaration on the Rights of Indigenous Peoples,” Chief John said.
UN Secretary-General Ban Ki-moon, in his opening remarks on May 12, said: “We are all aware that we continue to face many challenges in realizing the rights of indigenous peoples. From language to land, from poverty to participation, indigenous peoples continue to face discrimination, exploitation and the disproportionate impacts of societal harms.”
“We must continue to work together to help consolidate achievements as we strive to make the UN Declaration on the Rights of Indigenous Peoples a living document,” the Secretary-General said.
The Permanent Forum on Indigenous Issues was established by the UN Economic and Social Council (ECOSOC) in July 2000. It provides expert advice and recommendations on indigenous issues to the UN System through ECOSOC; raises awareness and promotes the integration and coordination of relevant activities within the UN System; and disseminates information on indigenous issues.
It is estimated that there are more than 370 million indigenous people spread across 70 countries worldwide.
Grand Chief Edward John. UN Photo/Eskinder Debebe
More People
Photos