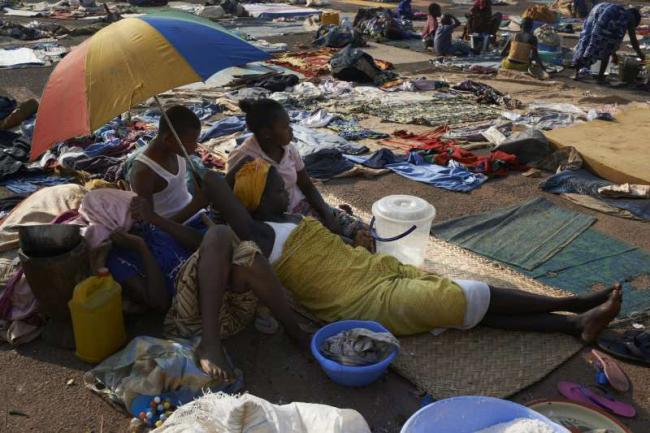 While a major scaling up of humanitarian action over the past year meant that “the worst has been avoided” in Central African Republic, senior United Nations and European Union relief officials in the region on Sundaystressed that needs are still extremely high and much remains to be done to ease the “appalling” suffering faced by the country's people. In a press release issued in Bangui, capital of the Central African Republic (CAR), the joint high-level mission drew attention to the human suffering and called for greater access to and better protection of vulnerable communities amid what has transformed into a deeply complex and increasingly multi-layered crisis. Participating in the five day mission were Deputy UN Emergency Relief Coordinator, Kyung-wha Kang, the UN Special Rapporteur on the human rights of internally displaced persons (IDPs), Chaloka Beyani, and the European Commission's Humanitarian Aid and Civil Protection department (ECHO) Director of Operations, Jean-Louis de Brouwer. The officials saw for themselves the “appalling” living conditions of people directly affected by the current crisis during their visits to Bambari, Yaloke, Mpoko and PK5 in Bangui, and acknowledged that while much has changed since conflict erupted more than a year ago amid a significant scaling up of humanitarian action, the need for assistance remains extremely high. More than two years of civil war and sectarian violence have displaced thousands of people in the CAR. Some 190,000 have sought asylum across the borders amid continuing violent clashes between the mainly Muslim Séléka alliance and anti-Balaka militia, which are mostly Christian. Meanwhile, more than 36,000 people remain trapped in enclaves across the landlocked country, hoping to find asylum in neighbouring States. More than 2.7 million Central Africans require one form or another of external help to survive. Some 500,000 are still displaced. Those that remain trapped by the continued violence are in an ever more precarious and desperate situation. The crisis has grown in complexity and, among other things, armed groups are fragmenting into numerous bands resulting in widespread banditry. The situation of vulnerable civilians becomes more intractable and subject to rumours and political manipulation that exacerbate violence. “Improved and reliable communication with all communities is key in this situation of deep fear and mistrust,” asserted Kan, who is also the UN Assistant Secretary-General for Humanitarian Affairs. She went on to express deep concern for the fate of the many pockets of minorities and displaced civilians whose return to a normal and dignified life is impeded by this growing complexity. For the IDPs that remain in the Mpoko site at Bangui's airport, humanitarians are committed to working with authorities to find alternative solutions based on their informed and voluntary decisions. For Muslim minorities confined in clearly delimited neighborhoods in Bangui and other towns such as Berberati, engagement in the otherwise laudable efforts of popular consultations in the Bangui Forum seems remote and reinsertion in the social and economic fabric of the country is only still a very distant proposition. At the same time, for nomadic Fulani cattle herders trapped by the conflict in such places as Yaloke, their very way of life is threatened as they languish in appalling conditions in enclaves. “All these groups might face different long term challenges to regaining a sense of normality but they do share one common immediate constrain: the paralyzing fear of insecurity, which stops them from returning to their neighborhoods, reinvest in their economic activities or embark on their traditional migratory journeys,” said Kang. Attacks and exactions against civilians are rife, including sexual gender based violence and forced enrollment of children in armed groups. The team stressed that such vulnerable groups require immediate protection. And while, it is the primary responsibility of the Transitional authorities to protect the population, relief partners can still do more in terms of identifying the most vulnerable and supporting local and religious authorities and civil society in providing adequate services and protection, in particular to women and children. National police and Gendarmerie, with the support of international forces must provide more effective security in more parts of the country. But chiefly, violence and fighting must stop. In that regard, Kang called on all armed groups to immediately stop attacking and preying on civilian. “Only when peace and security returns to all corners of CAR will people feel empowered to reinvest in their lives,” she added. The mission noted that the need to promote and restore social cohesion featured prominently in discussions with senior officials from the Transitional Authority, religious and community leaders as well as displaced people. An indispensable component to restore trust across sectarian and ethnics divides and address grievances is equality of rights. For his part, Beyani stressed that “all Central Africans must enjoy the same rights, including freedom of movement for all. This applies to all displaced populations too. No one should be stopped from moving within the country, to cross borders on their way out or back in. People have the choice to choose solutions best suited to their needs and situation and their choices must be supported and respected”. As for humanitarian action, ECHO's Jean-Louis de Brouwer reiterated that aid is delivered on the basis of needs, regardless of religious, political or ethnic affiliations. “Humanitarian organizations are here to help everyone and anyone who needs assistance. In so doing, humanitarian workers take great risks. Ensuring access to population in need and safeguarding humanitarian space is therefore essential to preserve the ability of aid groups to operate independently”.  Photo: UNHCR/S. Phelps