Geopolitics
Governance/Geopolitics
Gilgit Baltistan under illegal occupation of Pakistan since 1947, say experts at a webinar 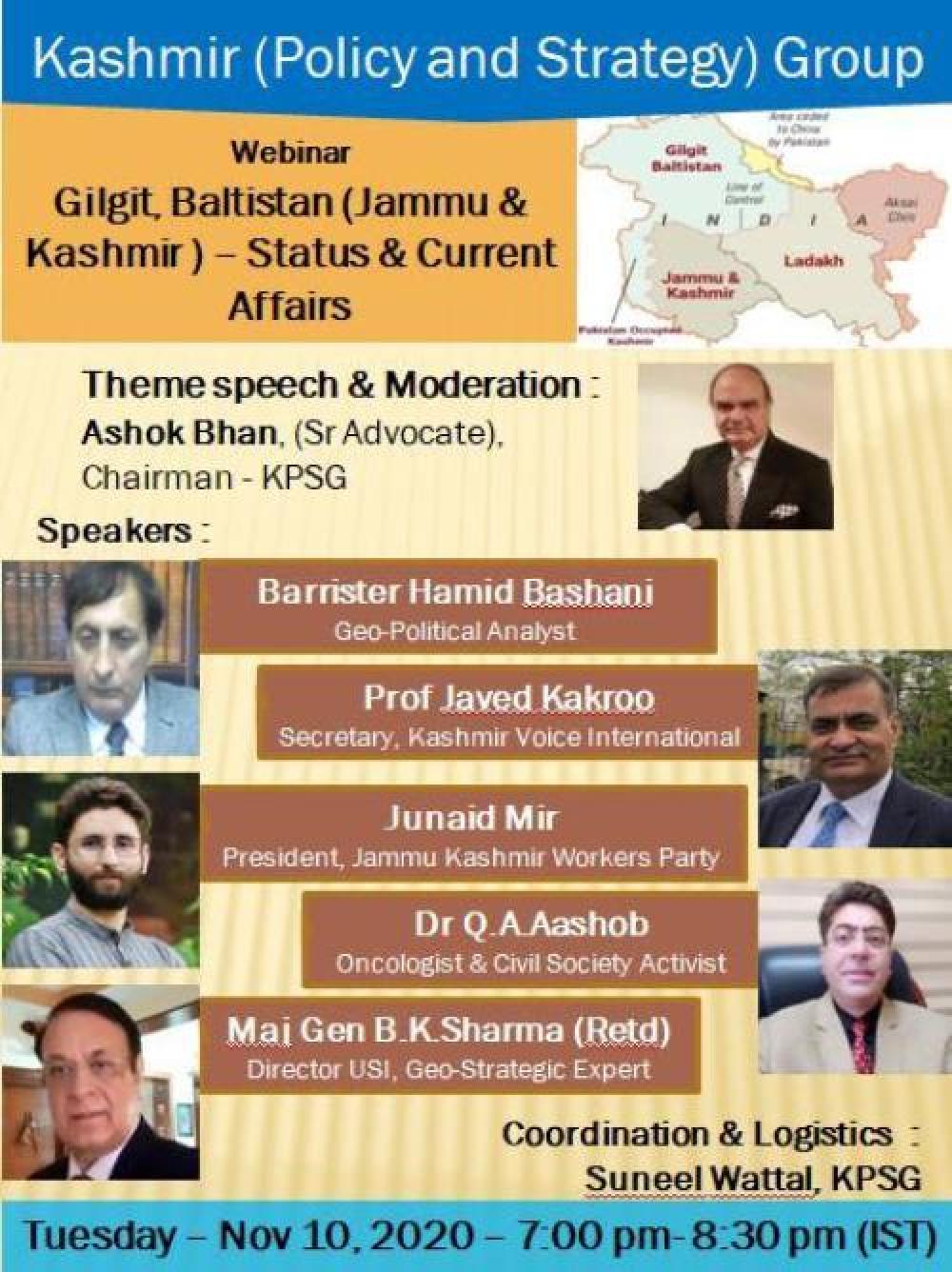 An area five times more than that of PoJK (Pakistan Occupied Jammu & Kashmir) with a population of approx. 1.8 million, Gilgit Baltistan has been under illegal occupation of Pakistan since 1947, according to speakers at a webinar on Gilgit-Baltistan (Jammu & Kashmir: Status & Current Affairs) organised on Tuesday by Kashmir (Policy & Strategy) Group (KPSG).

Moderated by Dr. Ashok Bhan, Chairman KPSG, the webinar's eminent participants  spoke on the  issue of Gilgit-Baltistan and Pakistan as its occupier.

Welcoming the participants, Dr. Ashok Bhan, an eminent jurist and geopolitical expert, in his opening remarks gave a background of Gilgit-Baltistan and its legal status.

An area of 72,496 sq. kms, five times more than that of PoJK with a population of approx. 1.8 million, Gilgit Baltistan has been under illegal occupation of Pakistan since 1947, the speakers said.

Under Karachi Agreement (April 28, 1949), the PoJK govt. under duress ceded the control of G-B to Pakistan, which not only separated Gilgit-Baltistan (G-B) from PoJK but also gifted Sakshgam Valley (area of 5,180 sq. kms.) to China in 1963.

Pakistan Prime Minister Imran Khan’s announcement (Nov. 1) to accord provincial status to G-B is another punch on the wounds of people of GB, experts opined.

Making a mention of the constitutional provision of Pakistan under Article 257, Dr. Bhan said that the Article said, “When the people of the State of Jammu and Kashmir decide to accede to Pakistan, the relationship between Pakistan and that State shall be determined in accordance with the wishes of the people of that State.”

He added that Pakistan has always tried to project G-B separately from PoJK.

Despite PoJK Interim Constitution 1974 referring to G-B as part of PoJK, PoJK Legislative Assembly passed a resolution for integration of G-B with PoJK. Pakistan never re-united G-B with PoJK.

It also abolished the state subject rule in G-B in 1974 allowing Pakistani Sunnis to settle there, thereby changing the demographic profile of the state by converting the Shia majority into minority over the years.

Pakistan was termed the aggressor by the UN and was required to remove all its armed forces and tribal invaders and has instead multiplied its forces in the region.

He averred that even the proposed GBO-2019 merely perpetuates Pakistan’s well established stance of maintaining ‘ambiguity’ about the constitutional status of G-B and that the order also fails to bring about any meaningful devolution of power to the region.

He cited the reason for Pakistan’s ambiguity on G-B as its efforts to de-link G-B from the “Kashmir dispute” and to treat the status of the Gilgit-Baltistan region as ‘settled’.

Importantly, he said that in Pakistan’s discourse on J&K, G-B is never mentioned.

Addressing the Webinar on demographic change in Gilgit-Baltistan, Barrister Hamid Bashani, a native from POK and a Human Rights Advocate said that G-B people have been agitating against the abolition of “state subject law” by Pakistan which has adversely affected the demographic character of G-B.

These changes, he said, can be gauged by observing Shia’s who constituted more than 80% of G-B population in 1948 have now been reduced to less than 40%.

These protests, he said, have been met with brute force. Making a mockery of the system, the aspiring candidates are "pre-screened" to ensure entry of only those who support annexation with Pakistan and can contest elections.

Voices for Rights in GilgitBaltistan are suppressed by law enforcement agencies and the nationalist leaders are subjected to torture and imprisonment for peaceful protests.

Barrister Bashani said that on September 14, 2012, the G-B “legislature assembly” passed a resolution demanding complete provincial status in Pakistan”, which was rebuffed with the “legislative assembly of AJK” passing a resolution (11 December 2014) rejecting GB resolution.