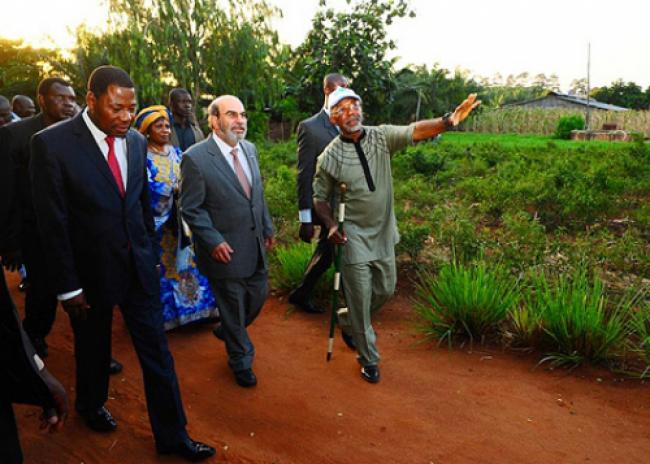 New York, Nov 6 (JEN): The United Nations Tuesday launched an emergency response programme to support farmers in northern Benin who lost crops, livestock and fishing grounds when the region was hit by floods in August.
“This is emergency assistance with a longer-term view, in that it includes awareness raising and training on resilience for community members and local authorities, said the Director-General of the Food and Agriculture Organization (FAO), José Graziano da Silva, who was in the country to launch the programme.
“This can help shape a new approach that looks to the future beyond the short timeframe of immediate emergencies.”
Agriculture accounts for 70 per cent of employment in Benin. In the rural and impoverished northern region, families are even more dependent on agriculture and less able to cope with repeated setbacks.
Many of the villagers who were hit by the floods this year were only getting back on their get from the last floods in 2012. The Government estimates that crop losses alone are estimated at some  USD 20 million.
Due to the scale of the destruction, the Government has nearly exhausted its resources assisting victims with food, shelter and cash transfers, with little possibility to help re-launch the agricultural sector.
The emergency programme will launch immediately, assisting some 7,500 households that have been worst-affected by the floods by supplying quality seed for rice, off-season vegetables and maize, farming equipment, fertilizers, training in seed production and conservation, and storage infrastructure to reduce production losses.
Farmers will also be trained in modern technologies and best practices, such as micro-dosing of fertilizers, to increase production, reduce costs and protect the environment.
On Sunday, da Silva took part in a ceremony to immediately activate the emergency assistance in the northern villages of Malanville and Karimama, the worst affected by the flooding, where nearly all agricultural production was wiped out, and farmers were left with no crops and no seed for planting anew.
FAO said a portion of the emergency funding will go to rehabilitate the commercial activities of some 1,300 young people who had started farming under a Beninese Government programme aimed at creating rural jobs and economic opportunity.
The programme’s resilience workshops will also benefit local community services by raising awareness of good agricultural practices, disaster risk reduction, climate change adaptation and natural resources management.
FAO Director-General José Graziano da Silva (centre) accompanied by President Yayi Boni (left) on a visit to Benin. Photo: FAO Benin
More Development
Photos