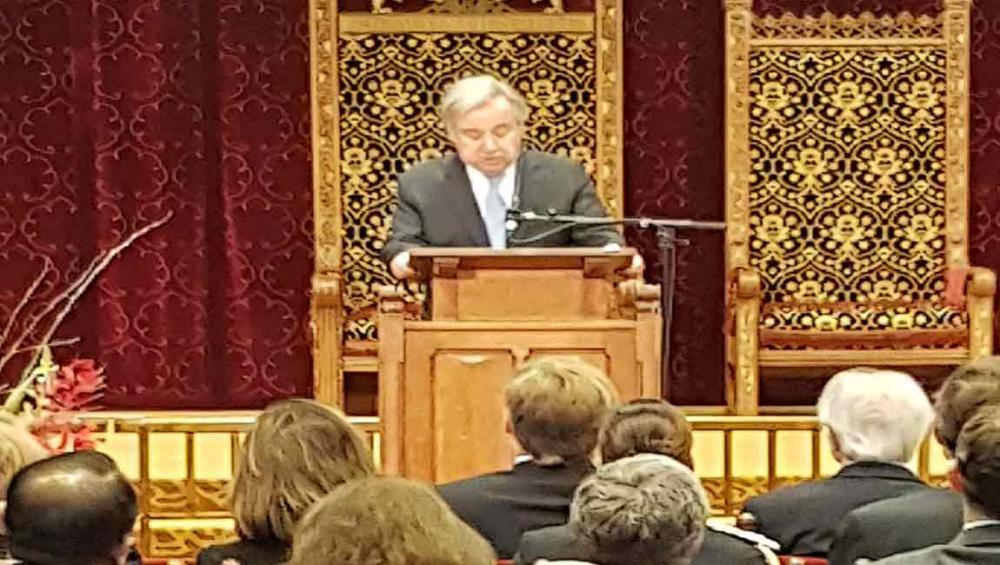 New York, Dec 22(Just Earth News): The United Nations tribunal dealing with atrocities committed during the Balkans wars of 1990s has been a pioneer in creating the contemporary architecture of international criminal justice, and “gave a voice to victims,” Secretary-General António Guterres said on Thursday.

“The creation of the International Criminal Tribunal for the Former Yugoslavia (ICTY) in 1993 was a ground-breaking moment,” said Guterres in his keynote address at the closing ceremony of the court in The Hague, Netherlands.

Recalling that it had been close to half a century since the Nuremberg and Tokyo war crimes trials and the 1948 Genocide Convention entered into force in 1951, Guterres said no international criminal tribunal that would recognize individual criminal responsibility for such a crime had yet been established.

“The creation of this Tribunal demonstrated a newfound and serious commitment by the international community that those responsible for perpetrating the most serious crimes of international concern should be held accountable for their actions,” he said.

The Tribunal sat for more than 10,000 days of trial, and heard testimony from nearly 5,000 people. Ninety individuals were sentenced for their crimes, including genocide, war crimes and crimes against humanity. Former Serbian President Slobodan Milosevic conducted his own defence in a five-year-long trial before the Tribunal, which ended without a verdict when he died in 2006.

“Beyond these numbers, the Tribunal gave a voice to victims,” the Secretary-General said, noting that people who had experienced atrocious violence and tragic losses were given the opportunity to tell their stories in court, to place their experiences on the record, and to see the perpetrators of crimes against them held accountable.

The Tribunal leaves behind one of its most important legacies: the immense archives documenting what happened in Sarajevo, Foca, Vukovar, Suva Reka, Srebrenica and elsewhere.

“These records ensure that the world will not forget, that history cannot be re-written, and that the victims’ voices will continue to resound down the decades,” he said.

The Tribunal has been a pioneer in creating the contemporary architecture of international criminal justice, and pushed international expectations of accountability beyond what was anticipated in 1993.

“Accountability has taken root in our collective consciousness,” he said, explaining that it is common practice for the UN Security Council to call for the perpetrators of atrocities to be held accountable, and similarly this is reflected on the statements of heads of state; in the work of journalists; in the efforts of national courts; and in public opinion.

The Tribunal also inspired the establishment of entities for ensuring accountability both at the international and national levels.

Indeed, without the UN tribunals for Yugoslavia and Rwanda, there might never have been a permanent International Criminal Court, the central institution of the international criminal justice system on Thursday, Guterres said.

But the future is not only the fight against impunity, it is also the pursuit of truth and reconciliation.

The genocide in Srebrenica will continue to haunt the global conscience. Just as the whole international community, including the UN, has had to acknowledge their share of responsibility for the massacre, so must the various communities of the former Yugoslavia build on the legacy of the Tribunal and deepen their efforts towards trust and full reconciliation.

“Accepting the undeniable truth and facts of past tragedies is crucial for building a better and common future,” he said.