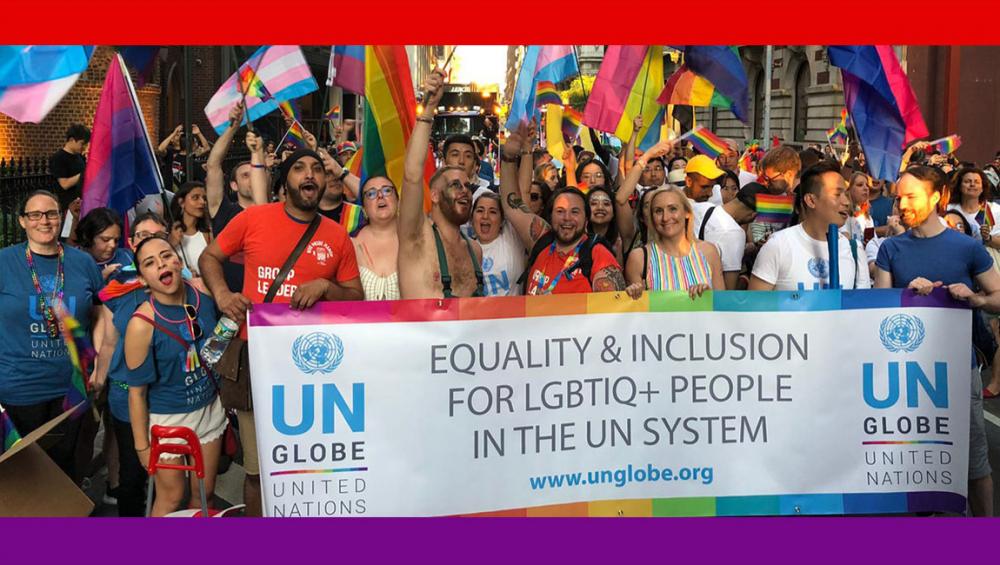 New York, July 1 (JEN): The empowering message straight from the Universal Declaration of Human Rights (UDHR) that "all human beings are born free and equal in dignity and human rights" resonated on Sunday from UN-GLOBE members who participated in the World Pride parade in New York City.

Their signs brought to life UDHR’s stirring words: "Everyone has the right to life, liberty and security" and "Act towards one another in a spirit of brotherhood".

Among other things, the United Nations inter-agency group combats homophobia, biphobia and transphobia throughout the UN system.

According to UN-GLOBE secretary Gabe Scelta, this year’s celebration is “especially important” because it marks the 50th anniversary of the Stonewall Riots, which for many represent the beginning of the fight for equality and nondiscrimination for  lesbian, gay, bisexual, transgender, questioning/queer and intersex (LGBTQI) people, “which we are still challenged with today”.

“As a transgender person marching under the banner of UN-GLOBE”, he said “it means our LGBTQI family, especially those facing discrimination all over the world, might see someone like me, someone like themselves, living openly and happily, and feel some hope for the future.”

Scelta underscored: “Our community faces unparalleled discrimination and violence all over the world, especially directed towards those with intersectional identities”, including trans women of color, black and latinx trans women.

He pointed out that extremely high rates of depression and suicide are experienced “in epidemic proportions" as a natural response to the pressures of being a minority, especially for young people.

“Seeing people like us living our lives with joy, with love and support from friends, allies, and workplaces can be a lifeline”, underscored Mr. Scelta.

All staff in New York were invited by the UN Staff Union and the UN Development Programme (UNDP) to march with UN-GLOBE in celebration of World Pride.

And next week in Geneva, Kate Gilmore, Deputy High Commissioner of the Office of the UN High Commissioner for Human Rights (OHCHR) and Dorothy Tembo, Deputy Executive Director of International Trade Centre (ITC) will be walking in solidarity as UN-GLOBE marches in the parade there.

Not everyone is celebrating

While the atmosphere of the day was one of exuberance and pride, the World Bank pointed out that despite advances over the past two decades, LGBTI people continue to face widespread exclusion, discrimination and violence in many countries.

To date, about one-third of UN Member States continue to criminalize homosexuality and there is a deeply entrenched stigma against them that not only negatively impact LGBTI people, but also the communities and economies in which they live, according to the World Bank.

Tackling this plight is especially difficult because a lack of legal protections perpetuate the struggle.

Another major barrier is the absence of data on the lives of LGBTI people, which the World Bank says puts in jeopardy the achievement of the Sustainable Development Goals (SDGs) and countries’ commitment to the principle of “leaving no one behind” in the effort to end poverty and inequality.