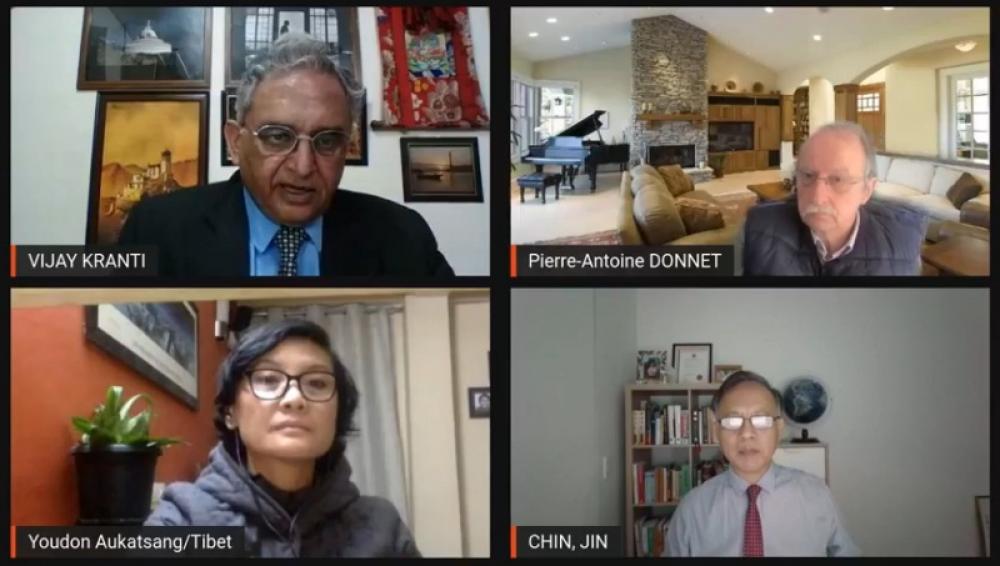 New Delhi: The Centre for Himalayan Asia Studies and Engagement (CHASE) and Tibetan Youth Congress (TYC) jointly held an international webinar titled “71 Years of China’s Colonial Rule in Tibet” on Tuesday to mark the 63rd anniversary of Tibetan people's uprising against China in 1959.

The main panelists included the internationally acclaimed scholar on China, Pierre-Antoine Donnet, Chin Jin, Chairman of the Federation of a Democratic China, and Youdon Aukatsang, an elected 4th term Member of Tibetan Parliament in Exile.

The panel was moderated by CHASE chairman Vijay Kranti.

According to the organizers, the main focus of the webinar was to highlight the colonial occupation of Tibet by China and the sad continual violation of human rights inside Tibet.

The panelists shared their experience on Tibet and highlighted the need for world democracies to join hands towards the cause of Tibet. Criticizing the exploitative nature of Chinese Communist Party (CCP), the panelists asked the Western media to drop its indifferent attitude towards China’s acts in Tibet.

Pierre-Antoine Donnet in his address expressed happiness that the world is taking note of Chinese misadventures and hoped that their stand against China would get stronger in the coming future.

Federation of a Democratic China's chairman Chin Jin said there is a strong desire for democracy within China which is brutally suppressed by the CCP, adding that "only when CCP is demolished, there can be freedom and independence for Tibet and Xinjiang."

Speaking about conditions inside Tibet, Youdon Aukatsang said that in seven decades of the Chinese rule over Tibet no Tibetan was ever appointed as the Party Secretary of CCP in Tibet.

“Absence of Tibetans in the decision making system of today’s Tibet only proves that Tibet is treated as a colony by the Chinese masters of Tibet,” Aukatsang said.

She further highlighted the indiscriminate exploitation of Tibet’s mineral resources and water resources by China.

CHASE chairman Vijay Kranti pointed out the inaccuracies of the Chinese claim of Tibet being part of China, adding that "it displays the colonizer attitude of China."

“No international law permits any country to certify the occupation by any other country over a third country," he said. "So, if any government tends to accept Tibet as a ‘part of China’ or as an ‘internal’ matter of China then that government is behaving like an accomplice in China’s crime of colonialism.”