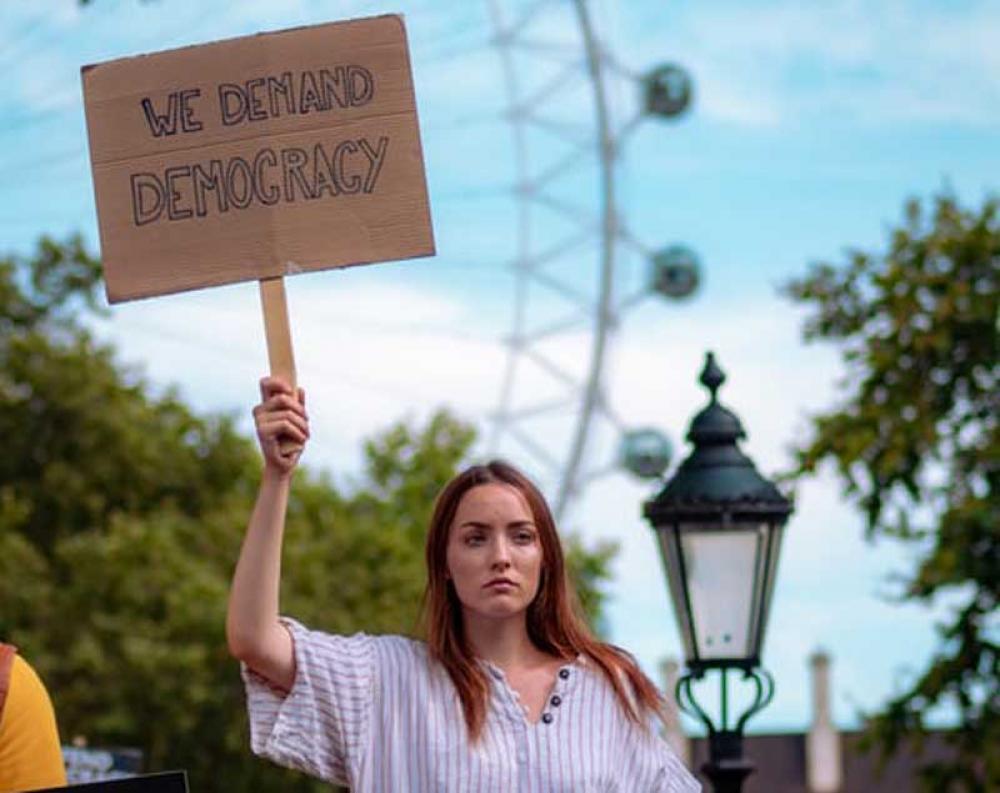 Washington: Authoritarian actors grew bolder during 2020 as major democracies turned inward, contributing to the 15th consecutive year of decline in global freedom, according to Freedom in the World 2021, the annual country-by-country assessment of political rights and civil liberties released recently by Freedom House.

The report found that the share of countries designated Not Free has reached its highest level since the deterioration of democracy began in 2006, and that countries with declines in political rights and civil liberties outnumbered those with gains by the largest margin recorded during the 15-year period.

The report downgraded the freedom scores of 73 countries, representing 75 percent of the global population.

Those affected include not just authoritarian states like China, Belarus, and Venezuela, but also troubled democracies like the United States and India.

In one of the year’s most significant developments, India’s status changed from Free to Partly Free, meaning less than 20 percent of the world’s people now live in a Free country—the smallest proportion since 1995. Indians’ political rights and civil liberties have been eroding since Narendra Modi became prime minister in 2014.

His Hindu nationalist government has presided over increased pressure on human rights organizations, rising intimidation of academics and journalists, and a spate of bigoted attacks—including lynchings—aimed at Muslims.

The decline deepened following Modi’s reelection in 2019, and the government’s response to the coronavirus pandemic in 2020 featured further abuses of fundamental rights.

The changes in India formed part of a broader shift in the international balance between democracy and authoritarianism, with authoritarians generally enjoying impunity for their abuses and seizing new opportunities to consolidate power or crush dissent. In many cases, promising democratic movements faced major setbacks as a result.

The Azerbaijani regime’s military offensive in Nagorno-Karabakh indirectly threatened recent democratic gains in Armenia, while the armed conflict in Ethiopia’s Tigray Region dashed hopes for the tentative political opening in that country since 2018.

All four of these cases notably featured some degree of intervention by an autocratic neighbor: Moscow provided a backstop for the regime in Belarus, Beijing propelled the repression in Hong Kong, Turkey’s government aided its Azerbaijani counterpart, and Ethiopia’s leader called in support from Eritrea.

The malign influence of the regime in China, the world’s most populous dictatorship, ranged far beyond Hong Kong in 2020.

Beijing ramped up its global disinformation and censorship campaign to counter the fallout from its cover-up of the initial coronavirus outbreak, which severely hampered a rapid global response in the pandemic’s early days.

Its efforts also featured increased meddling in the domestic political discourse of foreign democracies, as well as transnational extensions of rights abuses common in mainland China.

The Chinese regime has gained clout in multilateral institutions such as the UN Human Rights Council, which the United States abandoned in 2018, as Beijing pushed a vision of so-called noninterference that allows abuses of democratic principles and human rights standards to go unpunished while the formation of autocratic alliances is promoted.

“This year’s findings make it abundantly clear that we have not yet stemmed the authoritarian tide,” said Sarah Repucci, vice president of research and analysis at Freedom House. “Democratic governments will have to work in solidarity with one another, and with democracy advocates and human rights defenders in more repressive settings, if we are to reverse 15 years of accumulated declines and build a more free and peaceful world.”

A need for reform in the United States

While still considered Free, the United States experienced further democratic decline during the final year of the Trump presidency.

The US score in Freedom in the World has dropped by 11 points over the past decade, and fell by three points in 2020 alone.

The changes have moved the country out of a cohort that included other leading democracies, such as France and Germany, and brought it into the company of states with weaker democratic institutions, such as Romania and Panama.

Several developments in 2020 contributed to the United States’ current score.

The Trump administration undermined government transparency by dismissing inspectors general, punishing or firing whistleblowers, and attempting to control or manipulate information on COVID-19.

The year also featured mass protests that, while mostly peaceful, were accompanied by high-profile cases of violence, police brutality, and deadly confrontations with counterprotesters or armed vigilantes.

There was a significant increase in the number of journalists arrested and physically assaulted, most often as they covered demonstrations.

Finally, the outgoing president’s shocking attempts to overturn his election loss—culminating in his incitement of rioters who stormed the Capitol as Congress met to confirm the results in January 2021—put electoral institutions under severe pressure. In addition, the crisis further damaged the United States’ credibility abroad and underscored the menace of political polarization and extremism in the country.

”January 6 should be a wake-up call for many Americans about the fragility of American democracy,” said Michael J. Abramowitz, president of Freedom House.

“Authoritarian powers, especially China, are advancing their interests around the world, while democracies have been divided and consumed by internal problems. For freedom to prevail on a global scale, the United States and its partners must band together and work harder to strengthen democracy at home and abroad. President Biden has pledged to restore America’s international role as a leading supporter of democracy and human rights, but to rebuild its leadership credentials, the country must simultaneously address the weaknesses within its own political system.”

“Americans should feel gratified that the courts and other important institutions held firm during the postelection crisis, and that the country escaped the worst possible outcomes,” said Abramowitz. “But the Biden administration, the new Congress, and American civil society must fortify US democracy by strengthening and expanding political rights and civil liberties for all. People everywhere benefit when the United States serves as a positive model, and the country itself reaps ample returns from a more democratic world.”

The effects of COVID-19

Repressive regimes and populist leaders worked to reduce transparency, promote false or misleading information, and crack down on the sharing of unfavorable data or critical views.

Many of those who voiced objections to their government’s handling of the pandemic faced harassment or criminal charges.

Lockdowns were sometimes excessive, politicized, or brutally enforced by security agencies. And antidemocratic leaders worldwide used the pandemic as cover to weaken the political opposition and consolidate power.

In fact, many of the year’s negative developments will likely have lasting effects, meaning the eventual end of the pandemic will not necessarily trigger an immediate revitalization of democracy.

In Hungary, for example, the government of Prime Minister Viktor Orbán took on emergency powers during the health crisis and misused them to withdraw financial assistance from municipalities led by opposition parties.

In Sri Lanka, President Gotabaya Rajapaksa dissolved Parliament in early March and, with new elections repeatedly delayed due to COVID-19, ruled without a legislature for several months.

The resilience of democracy

Despite the many losses for freedom recorded by Freedom in the World during 2020, people around the globe remained committed to fighting for their rights, and democracy continued to demonstrate its remarkable resilience.

A number of countries held successful elections, independent courts provided checks on executive overreach, journalists in even the most repressive environments investigated government transgressions, and activists persisted in calling out undemocratic practices.

Following a marred election in Malawi in mid-2019, for instance, judges withstood bribery attempts and pressure from the incumbent administration and called for new elections.

The incident represented a critical win for Malawi’s democratic institutions and set a positive example of judicial independence for other African states.

In Taiwan, one of the highest-performing democracies in Asia, the government effectively suppressed the coronavirus without resorting to abusive methods, setting a sharp contrast with authoritarian China, where the regime has touted its draconian response as a model for the world.

Even before the virus struck, Taiwanese voters defied a multipronged, politicized disinformation campaign from China and overwhelmingly reelected a president who opposes moves toward unification with the mainland.

“Our report concludes that democracy today is beleaguered but not defeated,” said Abramowitz. “Its adversaries have grown more powerful, making the world a more hostile environment for self-government, but its enduring appeal among ordinary people—which we’ve already seen this year in places like Russia and Myanmar—bode well for the future of freedom.”