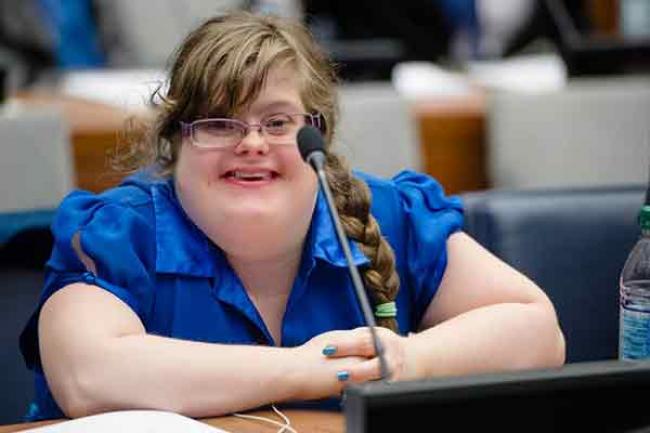 New York, Aug 31 (Just Earth News): Noting that national policies often tend to treat women and girls with disabilities as helpless objects of pity or allow them to be treated in that manner, the United Nations Committee on the Rights of Persons with Disabilities has stressed that, instead, they need to be empowered and allowed to enjoy their fundamental rights and freedoms, as any other person.

“Policies for women have traditionally made disability invisible, and disabilities policies have overlooked gender,” said Theresia Degener, a member of Committee member in a news release issued by the Office of the UN High Commissioner for Human Rights (OHCHR). “But,” she added, “if you are a woman or a girl with disabilities, you face discrimination and barriers because you are female, because you are disabled, and because you are female and disabled.” To address this issue, the Committee has issued guidance for the 166 states that have ratified the Convention on the Rights of Persons with Disabilities to help them empower women and girls with disabilities and to enable them to participate in all spheres of life on an equal basis with others, as set out expressly in Article 6 of the Convention. According to OHCHR, the guidance – termed as a General Comment – stresses that states need to empower women by “raising their self-confidence, guaranteeing their participation, and increasing their power and authority to take decisions in all areas affecting their lives.” The guidelines note that there are three main areas of concern regarding women and girls with disabilities: Physical, sexual, or psychological violence, which may be institutional or interpersonal Restriction of sexual and reproductive rights, including the right to accessible information and communication, the right to motherhood and child-rearing responsibilities Multiple discrimination It also details the measures the countries should take in a range of sectors, including health, education, access to justice and equality before the law, transport, and employment to enable women and girls with disabilities to fully enjoy their human rights. “Our recommendations cover practical steps, such as planning public services that work for women with disabilities, and involving them in the design of products so they can use them,” said Diane Kingston, another member of the Committee. “Think of the women and girls with disabilities who face huge and daily hurdles with regard to water, sanitation and hygiene, and how guaranteeing accessible facilities, services and products could transform their lives.” The General Comment also calls on States parties to the Convention to repeal or reform all legislation which discriminates, either directly or indirectly, against women and girls with disabilities. It also urges public campaigns to overcome and transform long-held discriminatory attitudes towards women with disabilities.  “We hope that States parties will be guided by this General Comment to review their laws and practices to achieve greater recognition and fulfilment of the human rights of women and girls with disabilities,” said Committee Chair María Soledad Cisternas Reyes. The Committee is a body of 18 independent experts which monitors implementation of the Convention on the Rights of Persons with Disabilities. The members of the Committee serve in their individual capacity and not as government representatives. They are elected at the Conference of the State Parties to the Convention for a four year term with a possibility of being re-elected once.