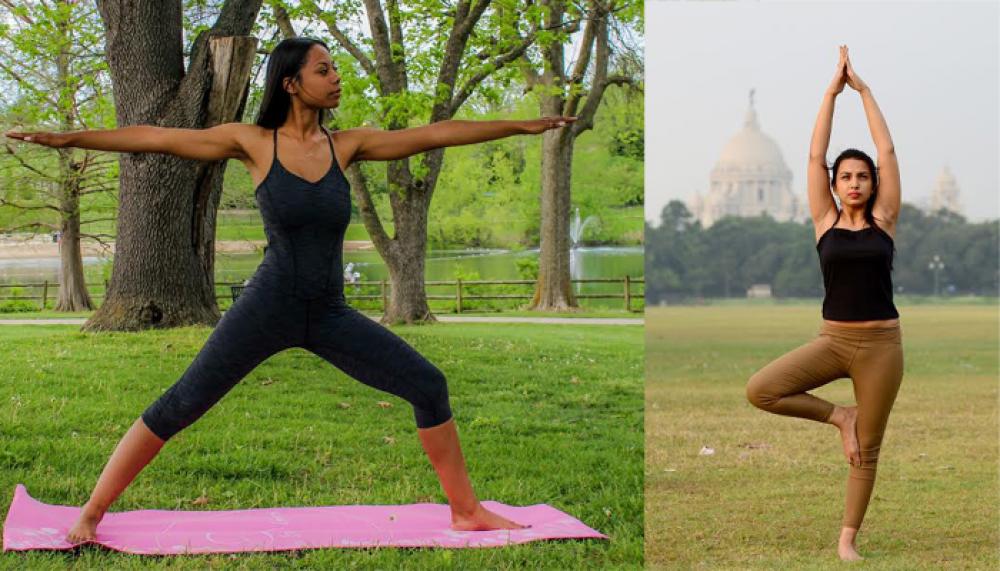 Yoga reflects a reality of globalization — the exchange of ideas that shapes cultures across our connected world, now more than ever. Jaime Dunaway and Emma Beyer from USA and Liza Gomes from India report ahead of World Yoga Day on June 21

Traditional Indian music fills a two-room yoga studio. Dozens of colored mats rest on the floor, facing a shrine. On the wall is a framed picture of Tirumalai Krishnamacharya, the father of modern yoga, near a statue of the Hindu god Ganesh.


In USA’s Midwestern town of Columbia, Missouri, the teacher at AlleyCat Yoga calls out positions — tree pose, child pose, warrior pose — as students bend their bodies in rhythmic motions to quiet their frazzled minds.Class ends with a final unison, “Namaste.” 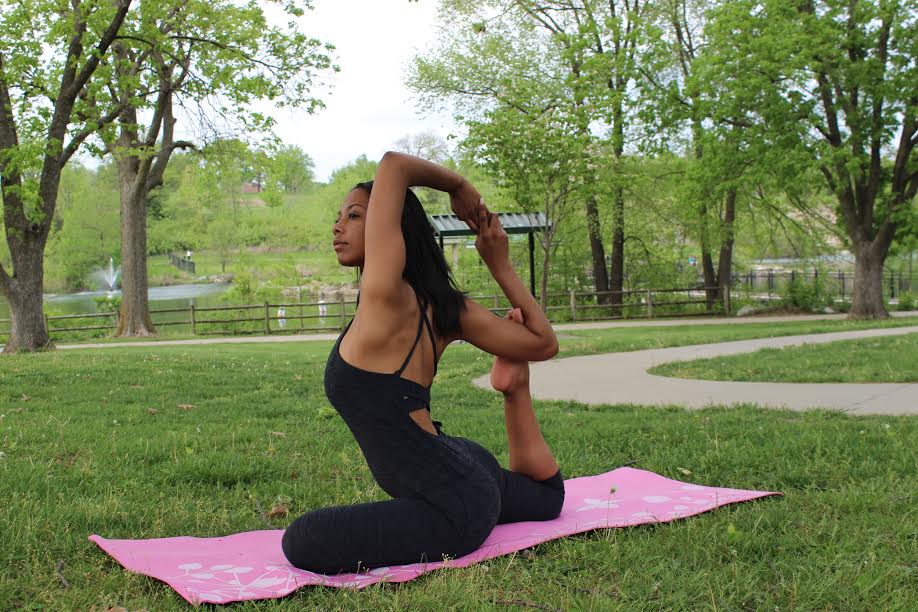 More than 8,000 miles away, a handful of men and women roll out mats inside the Mystic Yoga Cafe in Kolkata, India. Here, the room resembles a dance studio, with simple decor and full-length mirrors covering the front wall. There is no music, no special chanting. Stifling temperatures above 100 degrees don’t deter participants, who attend mostly for fitness or weight loss.

These disparate scenes may be the opposite of what many expect. While yogis in the United States are increasingly reconnecting with yoga’s spiritual roots, many in India are influenced by America’s commercialized approach to the practice and are becoming more consumer-focused themselves. Yoga reflects a reality of globalization — the exchange of ideas that shapes cultures across our connected world, now more than ever.

Such exchanges help drive a booming yoga industry. More than 36 million U.S. practitioners spent $2.5 billion on yoga classes in 2016, according to the Yoga in America Study conducted by Yoga Journal and Yoga Alliance. In the St. Louis metro area alone, there are nearly 50 yoga studios offering classes of all kinds.

In India, the number of yoga practitioners soared 30 percent last year, prompting a 35 percent increase in demand for yoga trainers catering to Westernized natives and international tourists, according to the Associated Chambers of Commerce & Industry of India.

The historical origins of yoga are steeped in ancient Indian philosophy designed to cultivate greater self-awareness, higher levels of consciousness and inner peace.

Yoga gained popularity in America in the 1960s, when the Beatles used traditional Indian instruments on their album “Help!” stoking interest in Eastern culture among Westerners. 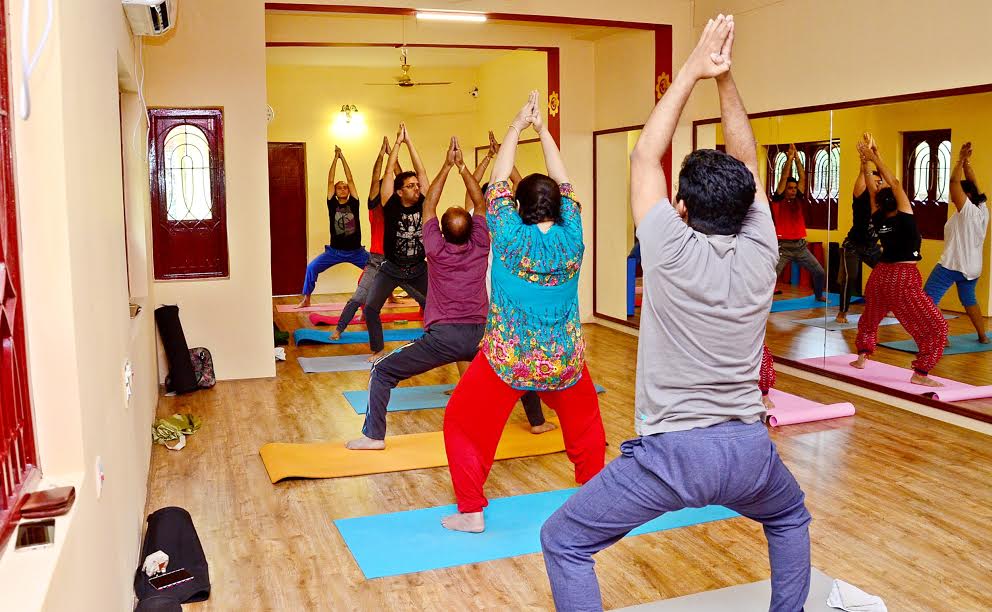 Over the next several decades, yoga spread across the United States, gaining an American flavor along the way. By the 1980s and ’90s, the practice was more consumer-focused than traditional Indian yoga. Americans increasingly used it as an exercise to stay healthy and active, according to the Yoga in America Study.

In 2016, the study reported that Americans spent $16 billion on yoga classes, clothing and accessories. Businesses profited from consumers’ interest in yoga — perhaps none more so than yoga retail giant Lululemon, which charges up to $128 for a pair of yoga pants.

Some yoga instructors say this consumerism can be a good thing.

“Do I like looking cute in my yoga pants? You bet. Do we capitalize on that? Yes, we live in America,” said Kathy Kessler, a yoga teacher at Halcyon Spa & Salon in Augusta. “But because it’s become commercialized, so many people were exposed to it that weren’t before.

“If someone comes to the mat, they’re going to evolve and and understand the therapeutic benefits of it.”

Yet many U.S. yoga practitioners are looking to the past to recapture that centuries-old spirituality at the core of the practice.

“One huge aspect of yoga is breathing and meditating, and I do that as much as possible throughout my week,” said University of Missouri senior Lucille Sherman, who has been practicing yoga since childhood. “Yoga helps me center myself. I'm a better person when I practice.

“It reminds me to sit still and take in life as it is, just for a moment.”

Types of yoga that reconnect Americans with the deeper side of practice are gaining momentum. These include Kundalini, which blends physical and spiritual practices like dynamic breathing and mantra chantingto awaken the conscious. Kessler offers Kundalini, as well as gong healing and other more spiritual classes. 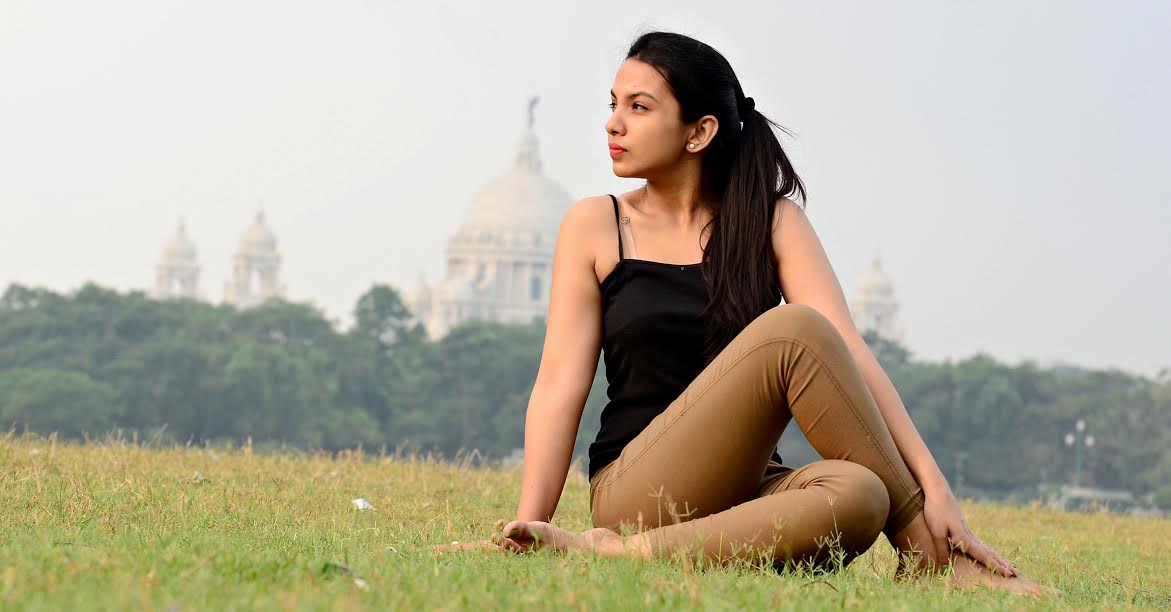 “(Kundalini) is much more spiritual than what has happened to yoga as it’s been mainstreamed,” said SiriAtmaKaur, a Kundalini teacher at Urban Breath Yoga in St. Louis. “It’s 16 times as powerful as other forms of yoga in getting into upper states of consciousness and achieving balance. The formulas are so powerful, you radiate. You look different.”

Instead of trendy yoga pants embellished with bright colors and bold patterns, Kaur said Kundalini practitioners opt for plain white clothing made of cotton, wool or silk to “brighten their aura” and prevent static electricity from altering their personal electric charges. The attire is topped with a headscarf to keep the Kundalini energy, awakened during yoga, from escaping through the top of the head.

Thanks to pop star practitioners like Katy Perry’s ex-husband, Russell Brand, Kundalini communities are active on the U.S. coasts. Recruiting members in St. Louis is tougher, but any American looking to reconnect with yoga’s traditional roots can find several tools in Kundalini practice, Kaur said.

One such tool is the ringing of the disharmonious gong, which helps students reset and balance their minds. Another is the Japji, or the Song of the Soul recited by the ancient sikhs that allows yogis to explore the depths of their souls.

The poses themselves are tools to explore the inner self.

“You can just do the yoga, but most of the time, people catch Kundalini, and they want to go all the way because it makes such a difference,” Kaur said. “It’s not a religion, but a lifestyle, a technology, a sacred science.”

More stressed-out Americans are traveling to India on yoga retreats, helping the Asian giant become one of the fastest-growing wellness tourism destinations in the booming $439 billion worldwideindustry, according to the Global Wellness Institute.

Missouri resident Dustin Thomas, who suffers from a connective tissue disorder called Ehlers-Danlos syndrome, made the pilgrimage to Pune, India, for rest, relaxation and a chance to learn how to become a yoga trainer at his business,Yoga Studio 72, in Springfield.

“I live basically pain free now,” Thomas said. “Yoga is the only thing I’ve found that can manage the pain or get rid of it.”

The Indian government is capitalizing on yoga’s popularity by supporting global events like the United Nation’s International Day of Yoga that make the practice even more susceptible to global and commercial forces. Such events boost India’s international profile and help the country export other parts of its culture, such as films, food and fashion.

“I am in touch with a friend in France, and I must say, she does yoga way better than any Indian trainer,” said 40-year-old GauravPandey, who attends classes at Mystic Yoga Cafe. “I practice yoga as it is a great way to keep myself healthy and fit without using any equipment. It is more of an exercise for me.”

But not everyone is happy with yoga’s changing profile in India. Pandering to commercial interests has caused tension among traditional yoga teachers, who believe globalization has inadvertently corrupted yoga’s original purpose.

“Indians have more knowledge about yoga as it originated in India, so it is our duty to see that yoga is practiced in its purest form,” said Sudhir Maheshwari, a yoga trainer at Mystic Yoga Cafe in the eastern city of Kolkata. “In India, the practice of yoga must be kept traditional. Once the Western influences creep in, the original form of yoga is not practiced in its sacred form.”

Though globalization has produced profound changes in yoga, some practitioners say its spiritual essence is its greatest gift to the world — and the reason it’s spreading, as Maheshwari said, “like wildfire.”

“I feel if anything is mystical, it will be practiced and adopted by people,” the trainer said. “When people feel and see the change, they will automatically adopt it.”

(Images by Avishek Mitra in India and Emma Beyer in USA)