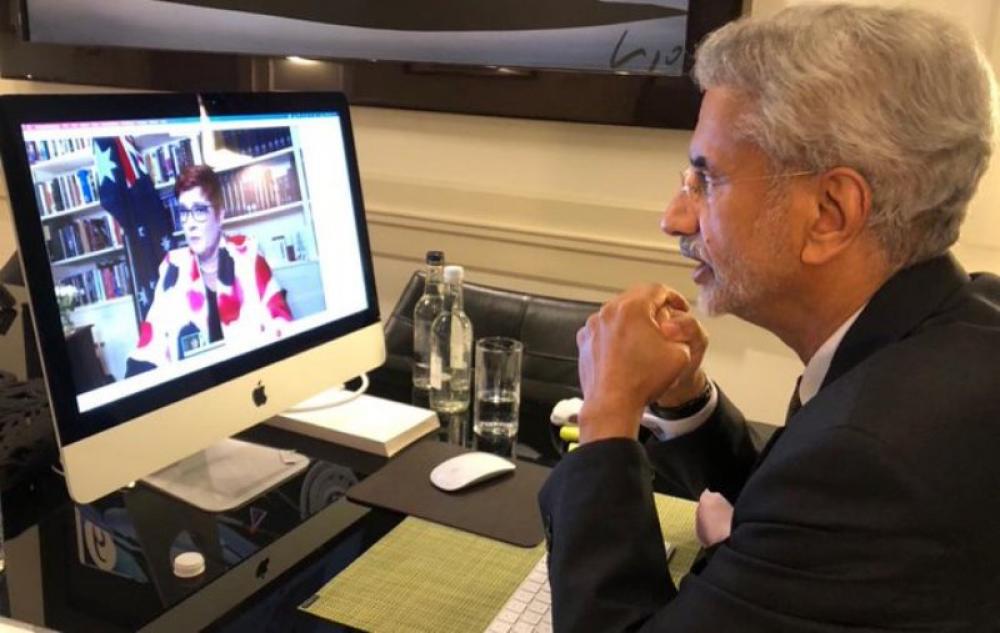 London: India’s External Affairs Minister, Dr. S. Jaishankar, France’s Minister for Europe and Foreign Affairs, Jean-Yves Le Drian, and Australia’s Minister for Foreign Affairs, Senator Marise Payne, met in London for the first India-France-Australia Trilateral Ministerial Dialogue on 4 May, on the sidelines of the G7 Foreign Ministers’ Meeting where they once again reiterated the commitment to advance shared values and working together to achieve a free, open, inclusive and rules-based Indo-Pacific.

The meeting took place at a time when China is posturing tough with an aggressive stance amid its deteriorating relationship with nations like Australia and India.

"India, France and Australia are committed to advancing their shared values and working together to achieve a free, open, inclusive and rules-based Indo-Pacific. The Ministers reaffirmed their support for the rule of law, freedom of navigation and overflight, peaceful resolution of disputes, democratic values, and respect for sovereignty and territorial integrity," read a joint statement.

"They reaffirmed their commitment to ASEAN's centrality and their support for ASEAN's Outlook on the Indo-Pacific, and noted its complementarity with India's Indo-Pacific Oceans Initiative. They welcomed the French decision to join IPOI by taking lead on the Marine Resources pillar and acknowledged Australia’s lead on its Marine Ecology pillar," it said.

India thanked France and Australia for their assistance in India’s response to the pandemic.

The Ministers agreed to enhance trilateral cooperation in confronting the challenges emerging from the COVID-19 pandemic.

They called for fair and equitable access to high quality, safe, effective and affordable COVID-19 vaccines and treatments globally, which will be a central factor in our collective recovery, especially for those who may be in vulnerable situations, including women and girls, in the most vulnerable countries, particularly in Africa.

They recognized India’s positive contribution to supply COVID-19 vaccines to various countries globally, both bilaterally and via multilateral mechanisms (COVAX) which France and Australia fully support and contribute to.

During the Ministerial Dialogue, the three countries shared mutual concerns regarding the strategic, security, economic and environmental challenges in the Indo-Pacific region.

They pledged to work together, and acknowledged the important role of regional forums such as the Indian Ocean Rim Association, the Indian Ocean Naval Symposium, ASEAN, the East Asia Summit and the Pacific Islands Forum.

The Ministers discussed the current situation in Myanmar.

The Ministers affirmed their commitment to addressing climate change and to expand cooperation through multilateral mechanisms such as the International Solar Alliance, particularly in perspective of the COP26.

"They underscored their commitment to developing sustainable, resilient and quality infrastructure in the Indo-Pacific region and agreed to work together through the Coalition for Disaster Resilient Infrastructure in advancing this objective," read the statement.

India, France and Australia undertook to work together with a range of partners to promote the rules-based maritime order based on respect for sovereignty and international law.

They affirmed the centrality of the UN Convention on the Law of the Sea (UNCLOS) and that UNCLOS provides the legal framework for all activities in the oceans and seas.

The three Ministers reviewed the outcomes of the first India-France-Australia Foreign Secretaries’ Trilateral Dialogue held on 9 September 2020, which have progressed on three pillars: maritime safety and security, marine and environmental cooperation, and multilateral engagement.

The Ministers agreed to deepen cooperation on maritime safety and security in the Indo-Pacific region. In this regard, the three Ministers welcomed the trilateral information sharing workshop on maritime domain awareness held at the Information Fusion Centre for the Indian Ocean Region (IFC-IOR) where both France and Australia have assigned a liaison officer, and encouraged information sharing between humanitarian and disaster relief agencies of the three countries.

The Ministers recognized that Illegal Unreported and Unregulated (IUU) fishing is a trans-boundary and transnational problem that affects the biological sustainability of relevant fish stocks and impacts the livelihoods of fishers, especially small-scale fishers and coastal communities in developing countries and Small Island Developing States.

They further noted that IUU fishing especially in the areas beyond the national jurisdiction (ABNJ) is a global concern, requiring a coordinated approach, and that the Sustainable Development Goal 14 (Life Below Water) has identified targets to combat this issue and address more broadly the issue of unsustainable exploitation of global fish stocks.

The Ministers committed to work together to enhance the health and management of the oceans, including by promoting the development of a sustainable blue economy, protecting coral reefs, supporting marine biodiversity, and combating marine pollution, particularly plastic pollution.

The Ministers noted the successful conclusion of the first trilateral dialogue on multilateral cooperation.

They agreed the COVID-19 crisis had demonstrated that, more than ever, we need strong multilateral institutions, underpinned by principles of openness, accountability and balance, which deliver for all countries as we tackle global challenges.

They underscored their commitment to a reformed, UN-centred multilateralism and in this regard the Ministers of Australia and France reaffirmed their support for India's permanent membership of the UNSC. They expressed their intention to continue to engage within the Alliance for Multilateralism to further deepen multilateral co-operation.

The Ministers committed to intensify coordination in multilateral institutions including the World Health Organisation, standard setting bodies and the UN Human Rights Council.

They committed to close engagement through the G20, with a particular focus on economic recovery and the response to COVID-19. They reiterated their commitment to the Paris Agreement as a guiding force for the discussions on climate change within the G20.

The Ministers underscored the importance of cooperation on counter-terrorism, including through the upcoming ‘No Money for Terror’ Ministerial Conference.

They noted the importance of cooperation to address risks to international security from malicious cyber activity, and to ensure that technologies critical to shared interests in security and prosperity, are designed and developed in line with public safety and democratic values.

The Ministers also welcomed the Trilateral Track 1.5 Dialogue that was convened on the sidelines of the Raisina Dialogue by Carnegie India, with the participation of ORF from India, Fondation pour la recherche stratégique, France and the National Security College at the Australian National University, Australia and government representatives of all the three countries.

They took note of the suggestions for cooperation for the three like-minded countries that emerged during the Track 1.5 Dialogue, including to support shared interests in regional connectivity, supply chain resilience, marine environment including marine debris, and cyber and critical technology.

The Ministers reaffirmed their commitment to maintaining the momentum of engagement, including at Leader-level, and to expanding trilateral cooperation to new avenues that can ensure security, stability, openness and prosperity for all in the Indo-Pacific region.

They agreed to hold the second Senior Officials’ Working Group meeting in the latter half of 2021 to review the progress on the outcomes of the Ministerial Dialogue and take forward the growing partnership.

@DrSJaishankar & I are focused on strengthening cooperation in response to increased competition in the #IndoPacific. We reflected on progress made at the
@G7Meetings and I pledged ’s ongoing support as India combats the current COVID-19 outbreak. @AusHCIndia."

My friend @DrSJaishankar & I are focused on strengthening ðŸ‡¦ðŸ‡ºðŸ‡®ðŸ‡³ cooperation in response to increased competition in the #IndoPacific. We reflected on progress made at the @G7 Meetings and I pledged ðŸ‡¦ðŸ‡º’s ongoing support as India combats the current COVID-19 outbreak. @AusHCIndia

The meeting took place at a time when Australia and India were involved in conflict with China on numerous issues.