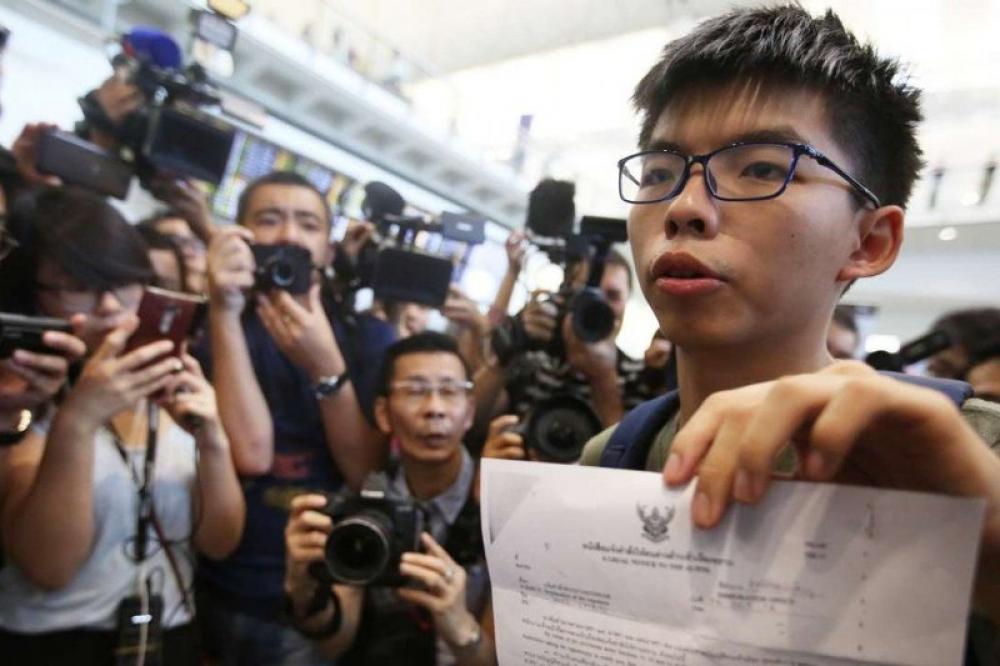 Agnes Chow and Ivan Lam are the two others who have pleaded guilty.

The three appeared in court on Monday and might face five years in prison.

However, they might be spared of a life sentence as the 'crime' took place before China enacted the draconian national security law earlier in 2020.

"We three have decided to plead guilty to all charges," Wong told reporters on Monday. "It will not be surprising if I am sent to immediate detention today."

"We will continue to fight for freedom - and now is not the time for us to kowtow to Beijing and surrender," he added.

In a series of tweets, Wong said he is willing to sacrifice his own freedom for Hong Kong's.

"What we are doing now is to explain the value of freedom to the world, through our compassion to whom we love, so much that we are willing to sacrifice the freedom of our own. I'm still learning to conquer the fear and I believe you are with me along this journey," he tweeted.

4. What we are doing now is to explain the value of freedom to the world, through our compassion to whom we love, so much that we are willing to sacrifice the freedom of our own. I'm still learning to conquer the fear and I believe you are with me along this journey.

"Comparing to remanded, #save12hkyouths in China deserves more of our attention. Today marks the 93rd day of their detention. Their families finally received letters from the dozen, signifying that they are still alive. #SAVE12 campaign managed pressure (sic) China," Wong tweeted.

"But from the content of the letters, they might have been tortured until they agreed to make forced confessions, saying they had appointed lawyers assigned by the authorities, saying they regretted taking part in activism," he added.

"I wish to pay tributes to our fellow activists who are about to face trials and prison, or to whom in distress for not being able to return home: We're not fearless, but you are the braver ones," the tweet read.

Wong and his fellow activists will remain in custody till December 2, when they will receive their sentence.

He and Chow are also among the three co-founders of the now disbanded Demosisto Party- a pro-democracy political organisation. The other member, Nathan Law, a former student leader and one of Hong Kong's youngest legislators, fled the country in early July, shortly after China imposed the new national security law.

The law gives Beijing a free hand to carry out trials of 'potential suspects' on the Chinese mainland. It also allows officials to carry out close door trials and designate those damaging public facilities- like transport- terrorists.

Experts believe the law will curb online freedom and make user data public as companies will be forced to share information if and when requested by law enforcement officials.

Several legal experts have also pointed at the ambiguous wordings in the law, that make it difficult for citizens to fully comprehend what constitutes a criminal offence and what is exempted from it.

According to the law, the trials can be a secret affair (Article 41) and can be held without a jury (Article 46).

Article 44 also states that the judges can be handpicked by Hong Kong's chief executive, who is answerable directly to the mainland.

Meanwhile, the legislation allows China to set up an Office for Safeguarding National Security in Hong Kong. Staff at the facility will comprise officials from the mainland, who will not be abiding by the existing rules in Hong Kong and would be exempted from any detention, inspection of search by local authorities.