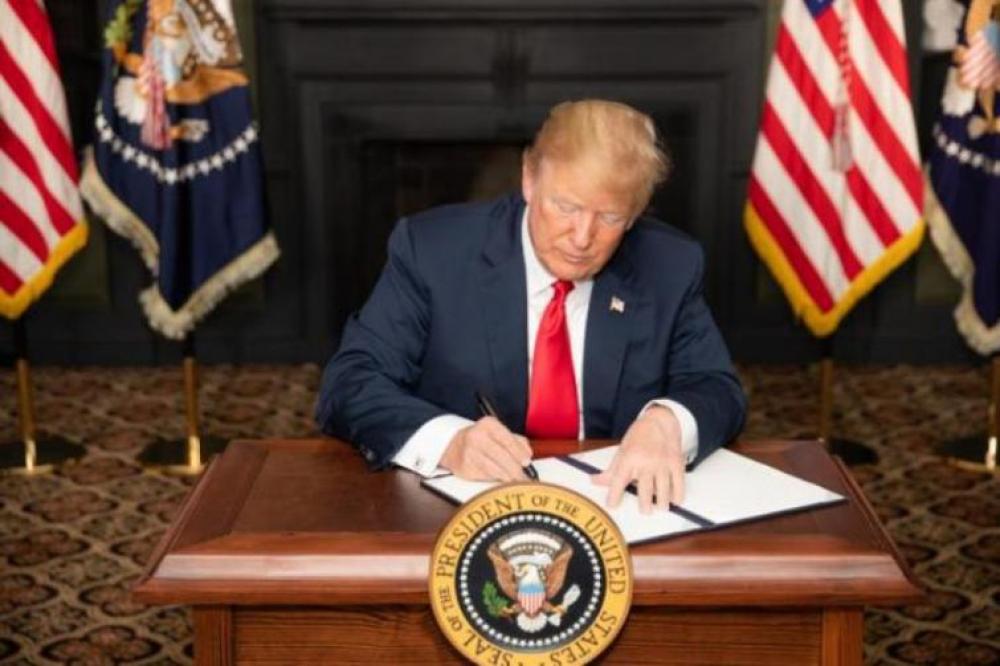 Washington (Sputnik/UNI) US President Donald Trump will officially launch his 2020 re-election campaign at a rally in Orlando, Florida on Tuesday which comes as Democratic rivals prepare for their first primary debate and with intraparty clashes over impeachment on the rise.


In typical Trump fashion, the president announced the date for his official campaign launch via Twitter and promised that it would be an event for the record books.
"I will be announcing my Second Term Presidential Run with First Lady Melania, Vice President Mike Pence, and Second Lady Karen Pence on June 18th in Orlando, Florida, at the 20,000 seat Amway Center. Join us for this Historic Rally!" Trump tweeted on May 31.


Although the rally does start until 2000 hrs local time (12:00 p.m. GMT) supporters of the president began lining up on Monday. One woman, 54-year-old Jennifer Petito, of Melbourne, Florida, was second in line, when she arrived at the arena at 0200 hrs on Monday - 42 hours before the rally’s start, the Sen Sentinel reported.
"We are building large movie screens outside to take care of everybody. Over 100,000 requests. Our Country is doing great, far beyond what the haters & losers thought possible - and it will only get better!" the president said on Twitter on Monday.


Ahead of Tuesday’s rally, the Trump campaign will hold an additional event, called the "45 Fest," outside of the Amway Center.


The festival will start at 1000 hrs (2:00 p.m. GMT) and will feature food trucks and live country music, according to media reports.


But not only Trump supporters will descend on Orlando on Tuesday, protests are scheduled throughout the day, including one just down the street from the arena at the Stonewall bar.


A giant "baby Trump" balloon is also expected to make an appearance at the protests. Organizers of the "Win With Love" rally, which will be held at the Stonewall bar, used crowdfunding website GoFundMe to raise the $2,500 needed to bring the balloon to Florida.


Long before the start of his re-election campaign, Trump began pushing his message of "Keep America Great" and attacking his opponents.


Trump is facing a crowded Democratic field with more than 20 contenders vying for their party’s nomination, as well as former Massachusetts Governor Bill Weld from within his own party.


The message Trump tries to sell to his base and donors is clear: a vote for Trump is a vote for America and a vote against socialism.


"Winning again in 2020 is going to be another tough fight. Whichever SOCIALIST the Democrats nominate will have the FAKE NEWS media on their side and a team of Hollywood Mega Donors funding their campaign," Trump said in statement on Sunday.


The president is also expected to push his economic record. On Saturday, Trump took to Twitter to warn voters of an impending market collapse if he were to lose his bid for re-election next year.


"The Trump Economy is setting records, and has a long way up to go... However, if anyone but me takes over in 2020 (I know the competition very well), there will be a Market Crash the likes of which has not been seen before!" the US president said.


The president has also ramped up his attacks on some leading Democratic candidates in early stages of the White House race. Former US Vice President Joe Biden, or as Trump calls him, "Sleepy Joe," has so far received the brunt of those attacks.


Trump has nicknames for other Democratic contenders as well, including Senator Bernie Sanders who Trump has referred to as "Crazy Bernie." Trump has called Senator Elizabeth Warren "Pocahontas" since it was disclosed she claimed Native American ancestry in an employment application decades ago.


Historically, incumbents running for a second term in office have a leg up on their opponents simply because they can point to their accomplishments while in the White House. However, early poll numbers - including those within the Trump campaign - have not looked promising.


The president himself, of course, dismissed the negative poll numbers.


"Only Fake Polls show us behind the Motley Crew. We are looking really good, but it is far too early to be focused on that. Much work to do! MAKE AMERICA GREAT AGAIN!" Trump said on Monday.


Media reports suggest, however, that the president is more concerned about his poll numbers than he publicly lets on.


The Trump campaign reportedly fired several of its pollsters after internal polling numbers showed the president lagging behind his Democratic rivals in several key states, CNN among other outlets reported over the weekend.


In three of those states - Wisconsin, Pennsylvania and Florida - Biden’s leads sit outside the poll’s margin of error, the reported added.


Last week, a Quinnipiac poll showed that 53 percent would vote for Biden if he faced off against Trump, while 51 percent would back Sanders.
Even Fox News, the president’s favorite cable news network, has Trump trailing both Biden (49 to 39) and Sanders (49 to 40).


According to the latest Gallup poll, 42 percent of Americans approve of Trump’s job performance, including 90 percent of Republicans. Rasmussen said on Monday that 48 percent of likely US voters approved of the president’s performance.


Those numbers could take a further hit should Democrats launch impeachment proceedings against the president.


"Opening an impeachment inquiry is exactly what we must do when the President obstructs justice, advises witnesses to ignore legal subpoenas [and] more," freshman Congresswoman Alexandria Ocasio-Cortez said in a statement on Twitter on Sunday.


House Speaker Nancy Pelosi has so far resisted the calls of her party's progressive wing to launch impeachment proceedings.