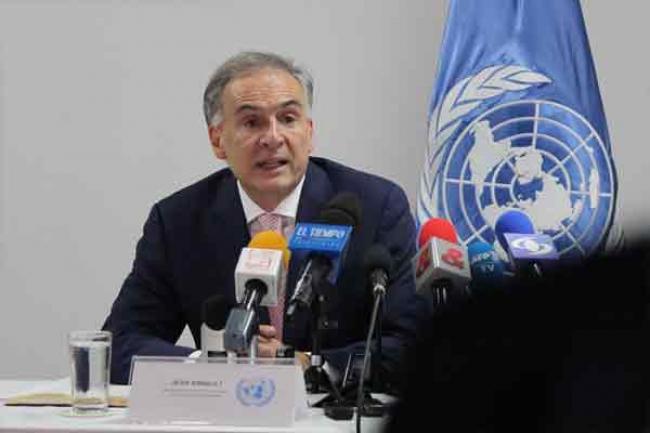 New York, Aug 27 (Just Earth News): The United Nations Security Council has warmly welcomed the conclusion of negotiations earlier this week between the Government of Colombia and the Revolutionary Armed Forces of Colombia â€“ People's Army (FARC-EP), and congratulated the Colombian people in achieving a final peace agreement, bringing an end to more than 50 years of conflict.

Reading a statement to the press following the Council's closed-door consultations on Friday on Colombia, Siti Hajjar Adnin, Deputy Permanent Representative to the UN of Malaysia, which holds the 15-member body's presidency for the month, said the Council reiterated its commitment to supporting implementation of the ceasefire agreement, cessation of hostilities and the laying down of arms through the UN political mission in the country. Ssaid the the Council also expressed full support to the efforts of the Special Representative of the Secretary General and Head of the UN Mission in Colombia, Jean Arnault, who had briefed the body for the first time on Friday. The Council's welcome follows the statement issued by the spokesperson for Secretary-General Ban Ki-moon this past Wednesday shortly after the talks wrapped up, which recalled that four years ago, the Colombian Government and the FARC-EP set out to resolve through dialogue one of the world's oldest armed conflicts. Since 2012, the parties have been in talks hosted in Havana, Cuba. Throughout the discussions, negotiators reached agreement on key issues such as political participation, land rights, illicit drugs and victims' rights and transitional justice. Among other developments, the Government and the FARC-EP announced in May an agreement to release and reintegrate child soldiers from the opposition force. The parties also announced the establishment of a gender sub-commission to bolster the voice of women in the peace process. In June, the Secretary-General travelled to Havana, where he witnessed the bilateral signing of a ceasefire and the laying down of arms and noted that the “peace process validates the perseverance of all those around the world who work to end violent conflict not through the destruction of the adversary, but through the patient search for compromise.” Meanwhile on Friday, UN Spokesperson Stéphane Dujarric said the UN Peacebuilding Fund has approved a total funding of $3 million for a project to support the collective reparations of victims of the armed conflict and help pave the way for the implementation of the peace agreements. In a recent report to the Security Council, the Secretary General expressed his satisfaction with the preparedness of the UN political Mission in Colombia, including the deployment of observers, who now number 80, which have enabled successful joint scoping visits to areas where the separation of forces and the laying down of arms will take place.  Ban stressed the working relationship between Colombian officers and FARC-EP combatants during recent visits and the positive reaction of the local population, “which all go to show that preparations are on track, not only from a technical viewpoint but also from a political perspective.” The report outlines the UN Mission's timeframe for key tasks to lay down arms. The verification the FARC- EP's retrieval of collective weapons, grenades and munitions and their transportation to their camps is to be completed within 30 days of the entry into force of the final peace agreement. Moreover, the verification of the destruction by FARC-EP of unstable weapons in the areas where their units were deployed, is to be completed within 60 days of the entry into force of the final peace agreement, monitoring individual and collective weapons held by FARC-EP in their respective camps in the established Zones. UN Mission observers permanently based in those camps will carry out this task. Sixty to 150 days after the entry into force of the final peace agreement, the Mission is to receive individual and collective weapons, grenades and munitions from the FARC-EP, store them in secure facilities under permanent UN observation, and transport them out of the zones, following the destruction of ammunition and the decommissioning of weapons. At the end of the process, the Mission will certify the completion of the laying down of arms, and inform the Government, the Security Council and the public. “After so many years of conflict, it may be difficult for many Colombians to imagine a future in peace. Yet the opportunity is at hand on Fridayand I hope they will be able to seize it,” stressed the UN chief.