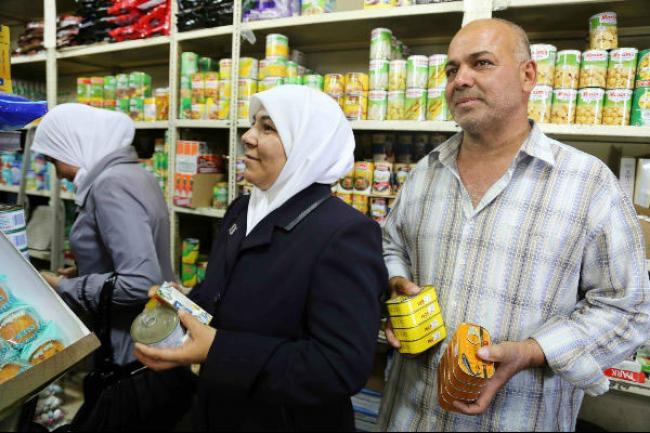 New York, Dec 2 (JEN) A life-saving programme providing food vouchers to more than 1.7 million Syrian refugees has been suspended due to lack of funds, the United Nations World Food Programme (WFP) announced on Monday, warning that the move will have a devastating impact on families who are already facing a dire situation as the harsh winter months approach.

“The suspension of WFP food assistance will be disastrous for many already suffering families,” warned WFP Executive Director Ertharin Cousin, in an appeal to donors. “[This] will endanger the health and safety of these refugees and will potentially cause further tensions, instability and insecurity in the neighbouring host countries,” she added. Under this programme, destitute Syrian refugees in Jordan, Lebanon, Turkey, Iraq and Egypt have been using WFP vouchers to buy food in local shops. Without these vouchers, many families will simply go hungry. As it stands now, Syrian refugees in camps and informal settlements throughout the region are ill prepared for yet another harsh winter, especially in Lebanon and Jordan, where many children have no shoes or proper clothing. Many tents are drenched in mud and hygiene conditions are growing extremely precarious.  Cousin stressed that WFP's Syria emergency operations are now in critical need of funding as many donor commitments remain unfulfilled. The programme needs a total of $64 million immediately to support Syrian refugees in neighbouring countries during the month of December. As soon as funding arrives, WFP will be able to immediately resume aid for refugees who use electronic vouchers to buy food in local shops. Since the start of the operation, WFP's voucher programme has injected about $800 million into the economies of refugee-hosting countries which border Syria. "We are very concerned about the negative impact these cuts will have on the refugees as well as the countries which host them. These countries have shouldered a heavy burden throughout this crisis," said Muhannad Hadi, WFP Regional Emergency Coordinator for the Syria Crisis. Since the Syrian conflict erupted in 2011, WFP has succeeded, despite fighting and problems of access, in meeting the food needs of millions of displaced people inside Syria and up to 1.8 million refugees in the neighbouring countries of Lebanon, Jordan, Turkey, Iraq and Egypt. This has been possible because of long-term donor funding for WFP operations and cooperation between WFP staff, partner organizations and host governments in the region. It is critical that this funding and cooperation continue, the agency stressed.

A Syrian refugee family shopping for food in one of the stores with which WFP cooperates in Chtoura town, in Bekaa valley, Lebanon. Photo: WFP/Sandy Maroun