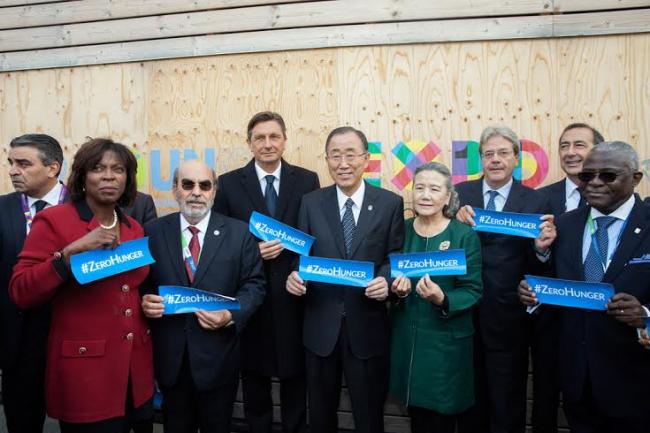 New York, Oct 17 (JEN): Celebrating World Food Day at the Milan Expo 2015, senior United Nations officials joined leading figures in the global fight against hunger in an appeal to the international community to speed up efforts on eradicating hunger and improving the way food is produced and consumed.

UN Secretary-General Ban Ki-moon, Ertharin Cousin, Executive Director at World Food Programme (WFP), José Graziano da Silva, Director-General of Food and Agricultural Organization (FAO) and Kanayo F. Nwanze, President of International Fund for Agricultural Development (IFAD) were among those present at the event being held as part of the UN’s contribution to the Milan Expo, as well as to celebrate the 70th anniversary of the founding of FAO. Ban stressed to those gathered at the event in Milan, Italy, that global leaders must act collectively on fulfilling the recently adopted Agenda 2030 and the Sustainable Development Goals (SDGs) to achieve complete eradication of hunger in the next fifteen years. “Agenda 2030 is ambitious and achievable. It is integrated and universal. It recognizes that poverty and hunger have complex and interconnected root causes. We made our promise. Now it is time for action,” said the Secretary-General in his address. This year, World Food Day focuses on the theme ‘Social Protection- breaking the cycle of rural poverty.’ Ban underscored that social protection is a tool to reach the most vulnerable as it prevents people from falling into extreme hardship and provides food and nutrition security. Graziano da Silva echoed the UN chief and noted that social protection allows the hungry to “become empowered to escape hunger through their own efforts” leading to a more dignified and productive life. “India, Brazil and Ethiopia and other countries show us that increasing the power of the very poor to buy food offers an affordable key to hunger eradication. Industrialized countries did the same to end widespread hunger after World War II,” he added. For her part, Cousin said, “Just imagine the night in 2030 when no child, woman or man goes to bed hungry…Starting now, each of us must stand up, get involved and do our part to make the changes so we reach Zero Hunger by 2030.” “Working together, we can all press for the changes that the world needs, including ending extreme poverty, supporting smallholder farmers and ensuring access to nutritious food all year round for the most vulnerable people by investing in social protection programmes,” she declared. At the event, Ban called for forming new partnerships and creating better ways of working. “We need all partners in this campaign – fashion experts and diplomats, rock stars and athletes, global world leaders and city mayors. Most of all, we need local communities,” he said. Seven decades ago, countries established the FAO with a ringing promise of ensuring humanity’s freedom from hunger. “Today we continue to aim for the Zero Hunger Challenge I launched three years ago to keep this promise to our world,” said Ban. Ban further reiterated that to achieve food security for all, the world must collectively start a movement which will also assist in attaining greater health, economic development and social inclusion for individuals and societies. Success in achieving the world's new sustainable development goals – and becoming the Zero Hunger Generation – ultimately depends on all people and not just governments, Graziano da Silva said in offering praise for both the Charter of Milan and the EXPO fair's food-centred theme. Photo: FAO/Giuseppe Carotenuto