Geopolitics
Food
Deforestation slows, 'but we need to do better': UN agriculture chief 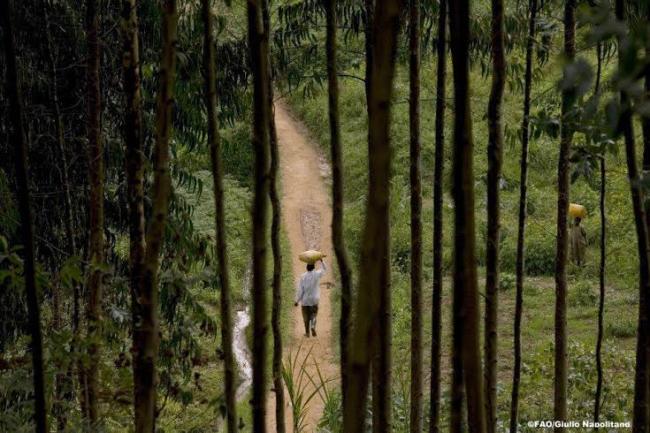 New York, Sep 8 (JEN): While the world's forests continue to shrink as populations increase and woodlands are converted to agriculture and other uses, over the past 25 years, the rate of net global deforestation has slowed down by more than 50 per cent, the United Nations Food and Agriculture Organization (FAO) said in a report published on Monday.

Some 129 million hectares of forest – an area almost equivalent in size to South Africa ¬– have been lost since 1990, according to FAO's most comprehensive forest review to date,The Global Forest Resources Assessment 2015.

It covers 234 countries and territories and was presented at this week's World Forestry Congress, which kicked off today in Durban, South Africa.

The FAO study noted however, that an increasing amount of forest areas have come under protection while more countries are improving forest management.
This is often done through legislation and includes the measuring and monitoring of forest resources and a greater involvement of local communities in planning and in developing policies.

He noted an "encouraging tendency towards a reduction in rates of deforestation and carbon emissions from forests," as well as improved information that can inform good policy, noting that presently national forest inventories cover 81 per cent of global forest area, a substantial increase over the past 10 years.

"The direction of change is positive, but we need to do better," the FAO Director-General cautioned. "We will not succeed in reducing the impact of climate change and promoting sustainable development if we do not preserve our forests and sustainably use the many resources they offer us," he added.

FAO's report stresses the critical importance of forests to people, the environment, and the global economy. The forest sector contributes about $600 billion annually to global gross domestic product (GDP) and provides employment to over 50 million people.

The report also noted that Africa and South America had the highest net annual loss of forests in 2010-2015, with 2.8 and 2 million hectares respectively, but the report notes how the rate of loss has "substantially decreased" from the previous five year period.

Globally, natural forest area is decreasing and planted forest area is increasing and while most forests remain publicly owned, ownership by individuals and communities has increased.
In all cases FAO stresses the importance of sustainable forest management practices.

"The management of forests has improved dramatically over the last 25 years. This includes planning, knowledge sharing, legislation, policies - a whole range of important steps that countries have implemented or are implementing," said Kenneth MacDicken, leader of FAO's Global Forest Resources Assessment Team.

He underscored how since 1990 the designation of additional forest land for conservation increased by some 150 million ha and that forest in protected areas has increased by over 200 million hectares.

Currently, forest area primarily designated for biodiversity conservation accounts for 13 percent of the world's forest, or 524 million hectares, with the largest areas reported in Brazil and the United States.

Deforestation and forest degradation increase the concentration of greenhouse gases in the atmosphere, but forest and tree growth absorbs carbon dioxide which is the main greenhouse gas.
FAO notes how a more sustainable management of forests will result in a reduction in carbon emissions from forests and has a vital role to play in addressing the impacts of climate change.

FAO has estimated that total carbon emissions from forests decreased by more than 25 per cent between 2001 and 2015, mainly due to a slowdown in global deforestation rates.

#Deforestation slows   #'but we need to do better': UN agriculture chief