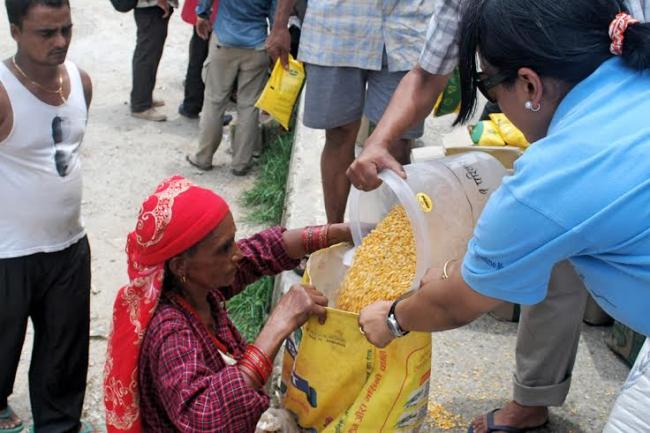 New York, July 14 (JEN) More than 2.8 million people remain in urgent need of life-saving humanitarian assistance in Nepal, especially in the district worst hit by the twin earthquakes east of the capital, Kathmandu, where monsoon-triggered heavy downpours, floods and landslides will soon exacerbate their needs, the United Nations has said.

According to the UN Office for the Coordination of Humanitarian Affairs (OCHA), since June, as part of the pre-monsoon assistance to the communities affected by the devastating 25 April earthquake, the World Food Programme (WFP), in collaboration with its partner organizations – Nepal Red Cross Society (NRCS) and Save the Children, has been distributing cooking oil, rice and lentils, which are Nepal’s staple food. “With the onset of the monsoon season, which often brings heavy downpours, floods and landslides in Nepal, United Nations and humanitarian partners have expedited distribution of basic food items to earthquake-affected families in Sindhupalchowk, the country’s worst-hit district, east of the capital, Kathmandu,” OCHA reported. Many of the beneficiaries gathered at one of the distribution centres at the Jalbire Valley Campus --much of which has turned into rubble – said it was the first time they received any relief aid. “I had not received anything until now,” said Nanda Maya Shrestha, 45, the mother of three who came from a nearby village to receive the aid. “This is the first time I am receiving something in aid. We only got our cards [certifying their “earthquake victim” status], nothing else.” This is the second phase of distribution of WFP aid to earthquake victims in Sindhupalchowk district since the 25 April quake, and it is likely to continue until the end of July. OCHA said aid agencies operating in Nepal estimate that more than 2.8 million people remain in need of life-saving humanitarian assistance, and that those needs are expected to persist through the end of the monsoon season in August. Most of the people gathered at the distribution centre said that shelter is the most important thing, together with food. “Unless we have a house, even the food items received cannot be stored safely,” said Shiva Kumari Nepali, 44, who was buried under the rubble of her house together with her daughter, Yamuna, for several hours after the April quake.  Photo: OCHA