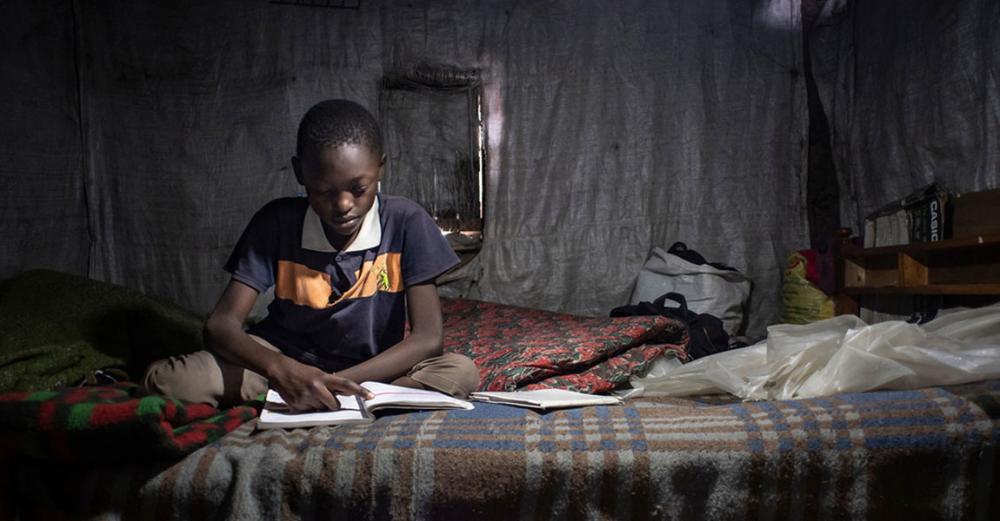 An 11-year-old child studies his Class 6 textbooks and revises the exercises at home in Nairobi, Kenya. He cannot participate in online learning as his family has no mobile phone.: UNICEF/Everett

New York: For at least 463 million children whose schools closed due to COVID-19, “there was no such a thing as remote learning,” the head of the UN Children’s Fund (UNICEF) said on Thursday, as the agency launched a new report outlining the limitations of remote learning and exposing the deep inequalities in access.

“The sheer number of children whose education was completely disrupted for months on end is a global education emergency. The repercussions could be felt in economies and societies for decades to come,” said Henrietta Fore, UNICEF Executive Director, in a news release announcing the findings.

At the height of nationwide and local lockdowns, nearly 1.5 billion schoolchildren were affected by school closures.

The report – based on a globally representative analysis on the availability of home-based remote learning technology and tools for children from pre-primary to upper-secondary levels – also found that even when children had the necessary platforms, they may not be able to learn remotely due to competing factors at home.

The competing factors, UNICEF said, could include pressure to do chores, being forced to work, a poor environment for learning, and lack of support in using the online or broadcast curriculum.

The report used data from 100 countries, which included access to television, radio and internet, and the availability of curriculum delivered across these platforms during school closures.

The report highlighted stark inequalities across regions and within countries. Schoolchildren in sub-Saharan Africa were the worst affected, with half of all students not reached with remote learning.

Schoolchildren from the poorest households and those living in rural areas are also at high risk of missing out during closures.

Age groups also had an impact, with the youngest students most likely to miss out on remote learning during their most critical years of learning and development.

To respond, governments should prioritize the safe re-opening of schools when they begin easing lockdown restrictions, UNICEF urged, along with urgent investment to bridge the digital divide.

“When reopening is not possible, [we] urge governments to incorporate compensatory learning for lost instructional time into school continuity and reopening plans,” added the UN agency, explaining that school opening policies and practices must include expanding access to education, including remote learning, especially for marginalized groups.

Alongside, education systems must be adapted and built to withstand future crises.