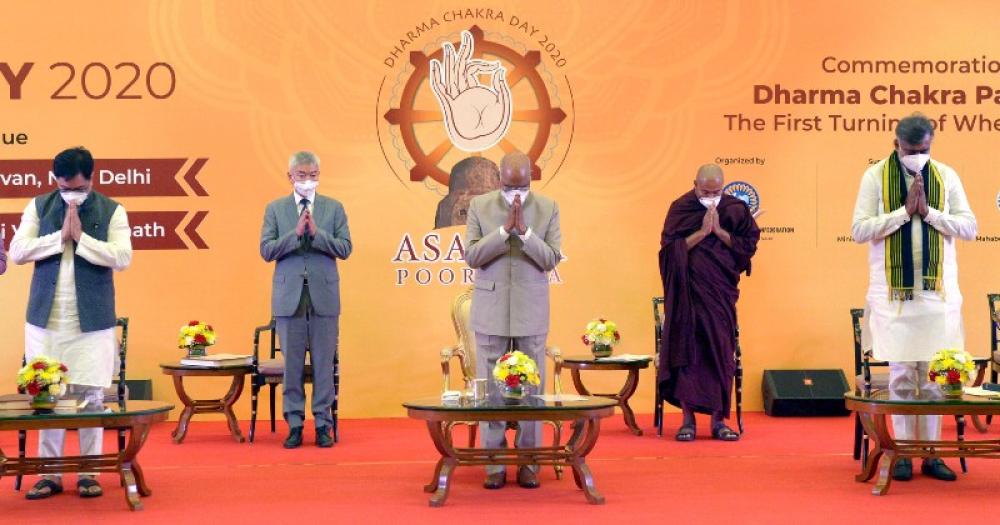 New Delhi: India is a land of religious diversity and true to the spirit of brotherhood the country on Saturday observed Dharma Chakra Day, the event commemorating Lord Buddha's First Sermon to his first five ascetic disciples.

Indian President Ram Nath Kovind said that as the pandemic ravages human lives and economies across the globe, Lord Buddha’s message serves like a beacon.

Contrast this message with the hankering of an unrepentant mankind indulging in the same old violence and degradation of nature.

"We all know that the moment the virulence of Coronavirus slows down, we have a far more serious challenge of climate change before us," he said.

The President was speaking at a virtual event organized by the International Buddhist Confederation on the occasion of the Dharma Chakra Diwas at Rashtrapati Bhavan. 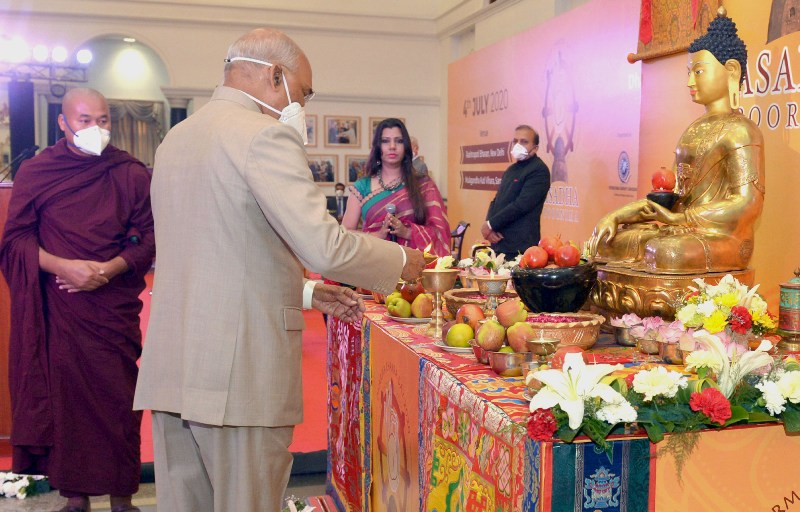 The President said that India is proud of being the land of the origin of the Dhamma. In India, we see Buddhism as a fresh expression of the sublime truth.

"Lord Buddha’s enlightenment, and the subsequent preaching by him for over four decades, were in line with India’s tradition of respect for intellectual liberalism and spiritual diversity," he said.

In modern times, two exceptionally great Indians – Mahatma Gandhi and Babasaheb Ambedkar – found inspiration in the words of the Buddha and went on to shape the destiny of the nation.

The President said that following in their footsteps, we should strive to hear the call of the Buddha, to respond to his invitation to walk the Noble Path.

The International Buddhist Confederation , under the aegis of the Ministry of Culture, Government of India, is celebrating Asadha Poornima on July 4, 2020, as Dharma Chakra Day.

This day commemorates Gautam Buddha's First Sermon to his first five ascetic disciples at the Deer Park, Rsipatana in the present day Sarnath near Varanasi, UP.

The day is also celebrated by Buddhists all over the world as the day of Dharma Chakra Parvattana or “Turning of the Wheel of Dharma”.

He expressed happiness that copies of Mongolian Kanjur are being presented to the Government of Mongolia.

Prime Minister talked about the teaching of Lord Buddha and about the eight-fold path which shows the way towards the well-being of many societies and nations.

Modi noted that Buddhism teaches respect for people, women, poor, for peace and non-violence and these teachings are the means to a sustainable planet.

The Prime Minister said that Lord Buddha spoke about hope and purpose and saw a strong link between the two.

Modi spoke about how he is hopeful about the 21st century, and this hope springs from the youth.

He underlined that India has one of the largest start-up ecosystems where bright young minds are finding solutions to global problems.

He also mentioned about the recent Cabinet decision to declare Kushinagar Airport in UP as an International Airport, which would facilitate the travel of pilgrims and tourists, while also giving a boost to the economy in the region.

A special video address by HRH Norodom Arunrasmy, thd Princess of Cambodia too will be steamed. She is the sister of the King of Cambodia and Chairperson of Cambodian Red Cross.

Rest of the day's events, including messages from top Buddhist religious and lay leaders, including eminent Masters and Scholars from different parts of the world will be streamed from Mulagandha Kuti Vihara,  near Dhumket Stupa, Sarnath and Mahabodhi Temple, Bodh Gaya in association with the Mahabodhi Society of India and Bodh Gaya Temple Management Committee.

While IBC, as the leading world Buddhist body is once again leading the collective aspirations of Dharma followers globally, due to Covid 19 pandemic the whole program is being conducted virtually, like a very successful Virtual Vaisakh on May 7 this year.

Dharma Chakra Day would henceforth is being celebrated by IBC as its flagship event.