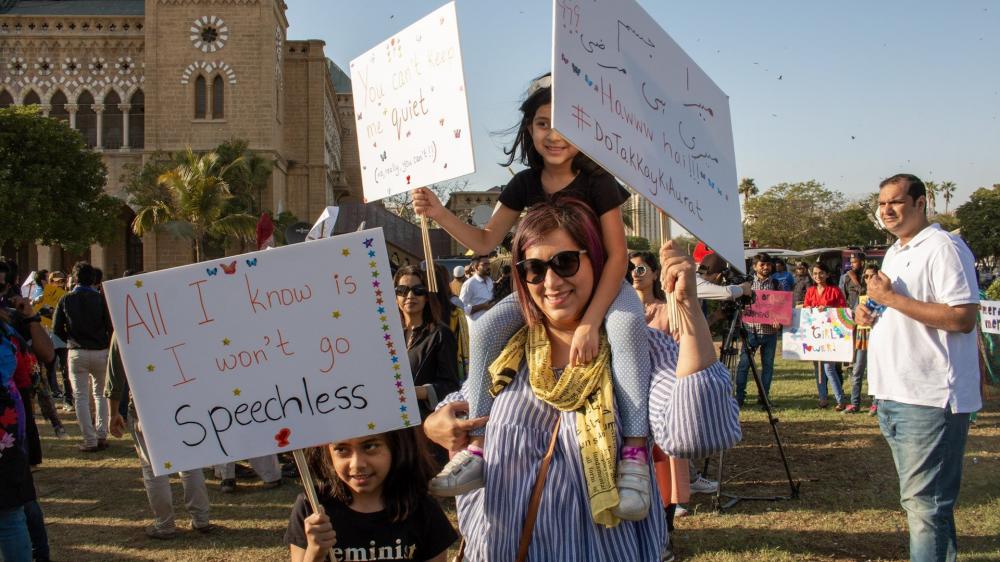 Islamabad: Pakistan PM Imran Khan's announcement on bringing education reform in his nation specially reacting to the 'Aurat March', which began annually since 2018, has raised doubts in the minds of a certain sections of people.

"It was evident at the Aurat March that people stand divided and there were distinct cultures in the same country. This is a cultural issue and it arises from the schooling system; this will be our first step towards synthesising our education system so that it is equal for everyone and socio-economic class differences are eliminated," Khan had said.

"By next year, we're launching one core syllabus for each school. Everyone will have to study one core subject, and on top of that schools are free to choose extra subjects of their own. This is so that we can contribute to nation building, and distinct cultures are eliminated," Khan added.

However, in his article published in The Indian Express, Newsweek Pakistan consulting editor Khaled Ahmed said: "What he hinted at was that the 'liberated' women who wanted more rights were 'Western educated' and were responsible for the societal divide that his government would end by adopting a 'uniform education system'."

"The obvious inference from his remark is that he would like to 'merge' Urdu and English-medium education with the madrassas or the religious schools functioning in the country: He would be less able to prune the extremist religious-ideological material in the Urdu-medium-madrassa sector while expurgating the 'liberal' aspect of the English-medium sector," he said.

Raising doubts, Ahmed wrote: "Given Pakistan’s poor level of intellectual sophistication, the project of educational reform under Khan runs the risk of becoming Boko Haram — which translates literally to 'Western education is forbidden' — since 2009. "

"As a movement of the Muslims of northern Nigeria, Boko Haram’s army of Islamic soldiers has killed more than two million people, and kidnapped and raped thousands of Muslim girls," he wrote.

Ahmed said Khan might create a system that would still have two streams: Urdu-medium and the madrassas.

In a report published on Mar 14 titled as 'PM Imran Khan says Aurat March is a result of cultural differences like it's a bad thing', Dawn News said on Khan's reaction to Aurat March, "Knowing IK's history calling feminism a 'western concept', his comments drew ire on social media for criticising cultural diversity and painting off the movement as an elitist affair. Who's going to tell him that those with privilege march for all those without?"

Many reacted on social media strongly against Khan's comment.

.@ImranKhanPTI’s elite education at Aitchison & Oxford got him where he is in life. Instead of viewing #AuratMarch as a cultural activity of the O/A level elites,he should do his research on their grassroots organizing. Conservative push to change school curriculum will not help. https://t.co/YL2SL7Tn3T

One Salman Khan tweeted: " @ImranKhanPTI’s elite education at Aitchison & Oxford got him where he is in life. Instead of viewing #AuratMarch as a cultural activity of the O/A level elites,he should do his research on their grassroots organizing. Conservative push to change school curriculum will not help. "

this speech goes to show that there is zero appreciation and tolerance for diversity, heterogeneity or critical thinking in pakistan. pakistani citizens are always encouraged to act/think like sheep.
that, and @ImranKhanPTI really, really hates women. https://t.co/U6QU6Tkehd

Another Zoya Rehman said: "This speech goes to show that there is zero appreciation and tolerance for diversity, heterogeneity or critical thinking in pakistan. pakistani citizens are always encouraged to act/think like sheep. that, and @ImranKhanPTI
really, really hates women.

What is Aurat March:

Women in large numbers on Mar 8 participated in 'Aurat March' across different cities in Pakistan to demand basic rights for women in each field of life.

The marches, which first began in 2018, were held on a day when the world observed International Women's Day.

The march called for more accountability for violence against women, and to support women who experience violence and harassment at the hands of security forces, in public spaces, at home, and at the workplace.

However, the Islamabad edition of the march was marred by a stone-pelting incident where the peaceful participants were allegedly targeted by religious hardliners.

According to Geo News, more than 2,000 people had gathered to raise their voice for the economic participation of women, against transgender rape, and called on the government to take action against forced conversions and ensure the rights of minorities.

Starting in 2018, the 2020 edition of the 'Aurat March' was held in various cities across Pakistan- Lahore, Multan, Quetta, Islamabad, and Karachi.

According to reports, the marches were attended by women, children, men, and transgender people.