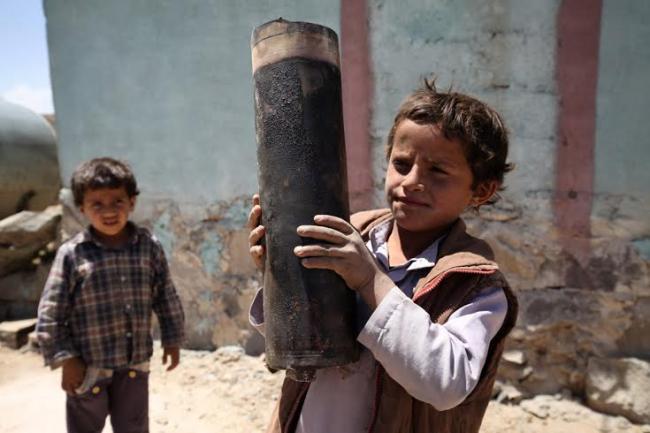 New York, Aug 26 (JEN) Alarmed by the dramatic increase in grave violations against Yemen’s children, the United Nations Special Representative for Children and Armed Conflict has called on all parties to respect their obligations under international law to safeguard civilians from harm, including children.

Reflecting on conflict-affected countries in the Middle East, Leila Zerrougui said in astatement issued yesterday that Yemen has become “another stark example of how conflict in the region risks creating a lost generation of children, who are physically and psychologically scarred by their experiences, deprived of educational opportunities, and who face an uncertain future.” After the conflict escalated in late March, at least 402 children had been killed, and more than 606 injured. According to a United Nations analysis, in comparison to the first quarter of the year, the number of children killed and injured more than tripled during the period of 1 April to 30 June – some 73 per cent of which were attributed to airstrikes. “Children are paying an unacceptable price, and the ever mounting death toll tragically underscores the need for urgent action to protect them and other civilians,” said the Special Representative. Zerrougui said she is appalled by the heavy civilian casualties in Taiz, where reportedly 34 children were killed and 12 injured over the past three days. On 21 August, Saudi-led coalition airstrikes slaughtered 65 civilians – including at least 17 children while another 17 were killed and 12 wounded during repeated shelling in residential areas by Al-Houthi fighters. “Parties to conflict must abide by their international legal obligations to distinguish between civilian and military objects, and take precautions to avoid and minimize civilian casualties,” she stressed. The Special Representative also deplored the number of attacks on schools and education personnel, and the devastating impact on children’s right to education. “As the start of a new school year approaches, the conflict is severely curtailing children’s access to education,” Zerrougui said. UNICEF has reported that since end-March, 114 schools were destroyed and 315 partially damaged – with an additional 360 serving to shelter displaced families. Furthermore, some 3,600 schools will not reopen due to insecurity – interrupting education access for an estimated 1.8 million children. Heightened conflict in Yemen has also had a detrimental impact on ongoing UN efforts to strengthen children protections. In May 2014, the Government had signed an Action Plan with the UN to end and prevent the recruitment and use of children by Government forces. However, implementation of the Action Plan has stalled since September 2014. At the same time, there are indications that the recruitment and use of children by all parties present on the ground has dramatically increased this year. Noting that Yemen is one of the seven countries participating in the global Children Not Soldierscampaign to prevent and end child recruitment for soldiers by end-2016, Zerrougui concluded: “The situation is untenable for children and their families in Yemen – all parties to the conflict must respect their obligations, and put an end to grave violations against children.” Photo: UNICEF/Mohamed Hamoud