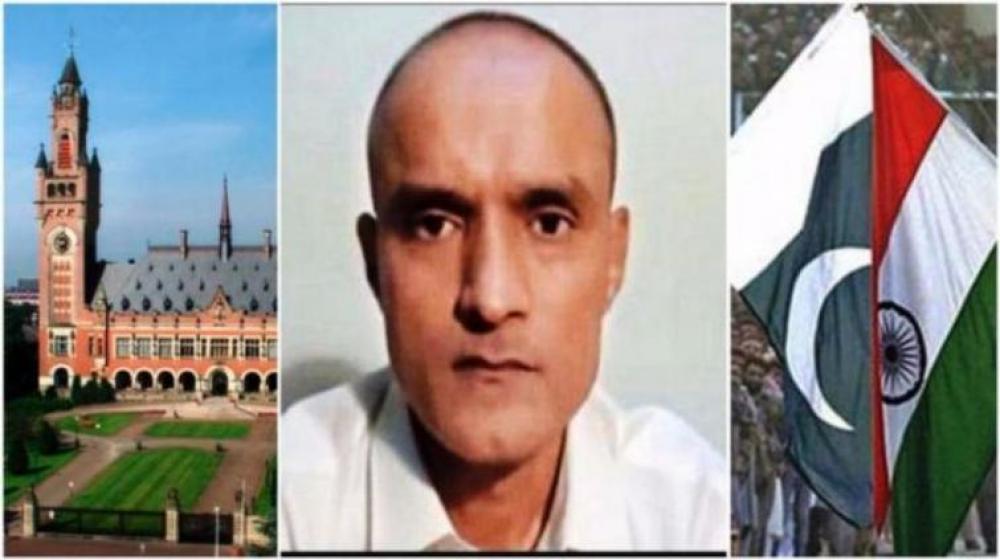 The Hague: The International Court of Justice (ICJ) ruled in favour of India as it passed its verdict in the case related to Indian national Kulbhushan Jadhav, who was sentenced to death in Pakistan on charges of espionage.

"And the decision in the #Jadhav Case is out! ICJ has ruled in favour of India on merits, affirming Jadhav’s right to consular access and notification," tweeted Reema Omar, International Legal Advisor, South Asia, ICJ. "The Court has directed Pakistan to provide effective review and reconsideration of his conviction and sentences," she tweeted.

The Court has also said that Jadhav’s death sentence should remain suspended until Pakistan effectively reviews and reconsiders the conviction/sentence in light of Pakistan’s breach of Art 36(1) i.e. denial of consular access and notification, she posted.


The verdict was read out  in a public sitting of the United Nations court  in The Hague.

A Pakistani military court in April 2017 sentenced Jadhav to death on charges of espionage and terrorism.

The International Court of Justice had earlier asked Pakistan to hold off the execution till it reaches its final verdict in the case.

Even as Jadhav, 48, was sentenced to death by a Pakistani military court in April 2017,  following the Indian government's move to the international court, the 10-member bench of the ICJ on May 18, 2017 had given a stay order and 'restrained' Pakistan from executing Jadhav till adjudication of the case.

In its written pleadings, India had accused Pakistan of violating the Vienna Convention by not giving consular access to Jadhav arguing that the convention did not say that such access would not be available to an individual arrested on espionage charges.

India had said the so called trial of Jadhav by a military court in Pakistan was "farcical".

Later in December, 2017, Kulbhushan Jadhav was allowed to meet his wife and mother but the MEA in Delhi had said it appeared Jadhav was “under considerable stress” and “speaking in an atmosphere of coercion”.

“The manner in which the meeting was conducted and its aftermath was clearly an attempt to bolster a false and unsubstantiated narrative of Jadhav’s alleged activities,” the ministry had said in a statement.

“The Pakistani side conducted the meeting in a manner that violated the letter and spirit of our understandings," it had said.

Kulbhushan Jadhav's Case- Highlights of India's Argument in the Case:

Pakistan is an irresponsible State. It has violated international treaties and obligations to which it is a signatory:-

i.      The Vienna Convention on Consular Relations;

ii.     The International Covenant on Civil and Political Rights;

The military court trial in Pakistan is farcical. Military Courts were set up after 2015 as an instrument for the military to engage in summary trials. They are responsible for several death sentences after April 2017. Jadhav was denied the right to be defended by a legal counsel of his choice. His conviction and death sentence is based on "confessions" taken in captivity.

Pakistan is using the Jadhav case to blame India for its problems in Balochistan. Jadhav was a civilian who was kidnapped and moved to Pakistan by armed groups. Pakistan faces several problems in its border with Iran. It has used proxy groups such as Jaish al Adl against Iran. Iranian officials have spoken of Pakistan's sponsorship of terrorist activities along the Iran-Pakistan border. Recently, US State Department designated Jaish al Adl as a front of Jundullah, which is a Specially Designated Global Terrorist.

Pakistan's argument that the International Court of Justice had no jurisdiction was overruled by the ICJ.

Pakistan's military has been restrained using the weight of ICJ and India's strong legal case.


1.         On 8 May 2017, India instituted proceedings in the International Court of Justice in relation to egregious violations by Pakistan of the Vienna Convention on Consular Relations, 1963 in the matter of arrest, detention and trial of an Indian national Shri Kulbhushan Sudhir Jadhav.

(a)         As Pakistan "arrested" Jadhav, they should have notified the Indian Consular officers without delay;

(b)         that India's consular officers were (are) free to communicate with, and have access to Jadhav;

(c)         that Jadhav had (has) similar freedom with respect to communication with, and access to India's consular officers;

(d)         Pakistan was (is) bound to inform Jadhav of his rights to communicate with, and access to India's consular officers;

(f)          India's consular officers had (have) a right to visit Jadhav, to converse and correspond with him and to arrange for his legal representation.

3. Pakistan is in breach of Article 36(1) (b) of the Vienna Convention which obliged Pakistan to inform India of the arrest of an Indian national "without delay". Jadhav was purportedly "arrested" on 3 March 2016, and it was only on 25 March 2016 that the Foreign Secretary of Pakistan informed the Indian High Commissioner in Islamabad of this "arrest". Pakistan has not offered any explanation as to why it took over three weeks to inform the Indian High Commissioner as to the arrest of Jadhav.

4.        Pakistan is in breach of Vienna Convention of failing to inform Jadhav of his rights under the convention. This conduct of Pakistan is evident through public statements by government functionaries that suggested that the detenu was not entitled to consular access, strongly suggests Pakistan has not informed Jadhav of his right to communicate with the Indian consular post.

6.           The entire trial and sentence by Pakistan's military court, which was based on "confession taken under custody", without adequate legal representation was farcical. It was in brazen defiance of the rights and protections provided under the Vienna Convention and the International Law, including ICCPR.

7.           The jurisprudence on 'human rights', including under the International Covenant on Civil and Political Rights (ICCPR), recognises 'due process' rubric. A vital element of due process is: the right to an effective defence against criminal charges, and to a fair and impartial trial, in which the accused is represented by a lawyer of his choice. This is the due process guarantee, whether viewed in the context of 'minimum standards', or through the prism of Article 14 of the ICCPR. Article 36, by creating the mechanism of consular access, enables the sending State to help its national realise the promise of due process.

9.           India depended on the jurisdiction of the Court under Article 40, Paragraph 1 of the Statute of the International Court of Justice, read with Article 38 of the Rules of the Court, and Article 1 of the Optional Protocol to the Vienna Convention on Consular Relations, 1963.

10.        Pakistan's attempt to carve out exception to the rights under the 36 of Vienna Convention suggesting that such rights are not to be made available in the context of an individual against whom there is a prima facie case of "espionage" is not tenable.

11.        The 2008 bilateral agreement on Consular access does not jettison the Vienna Convention. The Vienna Convention on the Law of Treaties recognizes that States may have bilateral arrangements that "amplify or supplement" the principles engrafted in the multilateral Convention/ Treaty. Article 73(2) of the Law of Treaties does not recognize dilutions of the provisions of the multilateral convention by bilateral treaties.

12.        Pakistan's request for legal assistance is a propaganda document. It is Pakistan which has failed to agree to a Mutual Legal Assistance Treaty (MLAT) with India or to ratify MLAT under SAARC. The reason why Pakistan has avoided signing an MLAT is because of its ceaseless support to cross border terrorism. More than 40 MLAT requests from India to Pakistan remain unanswered.

iii.        India asked Court to issue immediate instructions to Pakistan to not take any action on the sentence awarded to Jadhav till India's request for
Provisional Measures was considered.

9 May 2017                                Court sent an urgent communication to the PM of Pakistan, and called upon Pakistan, to act in such a way, pending Court's decision on India's Request for Provisional Measures (stay order) as will enable any Order the Court may make on this Request to have its appropriate effects.