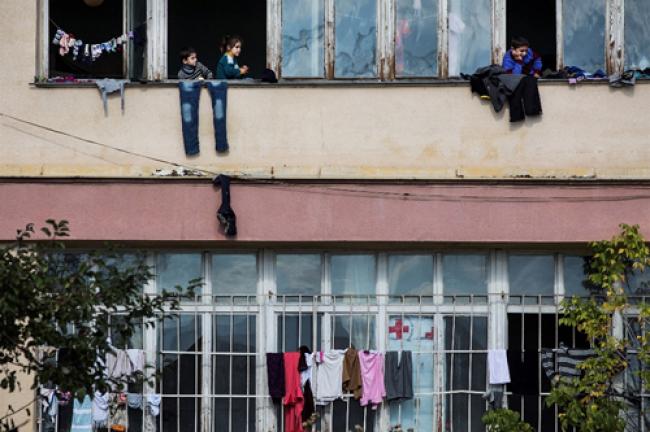 New York, Oct 26 (JEN): Urging enhanced global migration governance, the United Nations independent expert on the human rights of migrants called Friday for the establishment of a single, rights-based international body, preferably within the UN system, to comprehensively tackle the myriad aspects of the phenomenon.
“The lack of a comprehensive framework has meant that global migration governance remains fragmented,” said UN Special Rapporteur François Crépeau, briefing the press at Headquarters in NY on his latest report, which he presented Thursday to the General Assembly’s social, humanitarian and cultural committee (Third Committee).
Joined at the briefing by Abdelhamid El Jamri, Chair of the Committee on the Protection of the Rights of All Migrant Workers, Crépeau said that currently, at the international level, migration was tackled by a disparate collection of agencies and experts, well-intentioned, but “different pieces all detached from one another.”
Most importantly, there is no single UN organization dealing with the issue within a coherent institutional framework, “despite the very, very good work of the International Organization for Migration (IOM), which is actually outside the UN system and whose constitution does not contain the words ‘human rights’.”
This lack of coherence has left migration issues for State-led, informal and non-binding processes, which as only added to the ad hoc nature and, in some cases, lack of transparency surrounding migration. “States retreat from binding United Nations-based frameworks, with preference for informal processes governing migration,” he said.
To remedy this situation, and to ensure that migrants are seen “first and foremost as human beings with human rights,” Crépeau urged strengthening global migration governance, and suggested the possibility of moving the Geneva-based IOM inside the UN system, with a revised, protection-based constitution.
Echoing his comments Thursday to the Third Committee, he stressed that more governance does not mean that States would give up sovereignty.
“On the contrary, States would have more control if there was more migration governance. Currently, migrants themselves, often with the help of smugglers, are crossing borders regardless of State policies,” he said, adding that the sad irony is that the very policies being put in place to address migration were actually weakening States, harming migrants and empowering criminal smuggling networks.
Further, he said that people migrate irregularly due to a lack of regular channels for migration, and largely in response to unrecognized labour needs in destination States.
“If States recognized such labour needs, including for low-skilled work, and open up more regular migration channels, as well as sanction unscrupulous employers who exploit irregular migrants, this would lead to fewer irregular border crossings, less smuggling of migrants, less loss of life at borders, and fewer migrants’ rights violations,” he noted.
“I believe the tragic incidents in the Mediterranean over the past few weeks show just how relevant this discussion is,” Crépeau said, recalling that earlier in the month, several States and other stakeholders urged more regular migration channels during the General Assembly’s High-level Dialogue on International Migration and Development.
“I urge all destination States to consider this carefully, in order to prevent loss of lives at sea, in deserts, in mountains, and other dangerous routes irregular migrants are taking, escaping from poverty and violence, seeking a better future for themselves and their families,” he said.
Independent experts or special rapporteurs are appointed by the Geneva-based UN Human Rights Council to examine and report back, in an unpaid capacity, on specific human rights themes.
Migrants and asylum-seekers, mostly Syrian Kurds, have crowded into an abandoned schoolhouse on the outskirts of the Bulgarian capital Sofia. Photo: IRIN/Jodi Hilton
More People
Photos