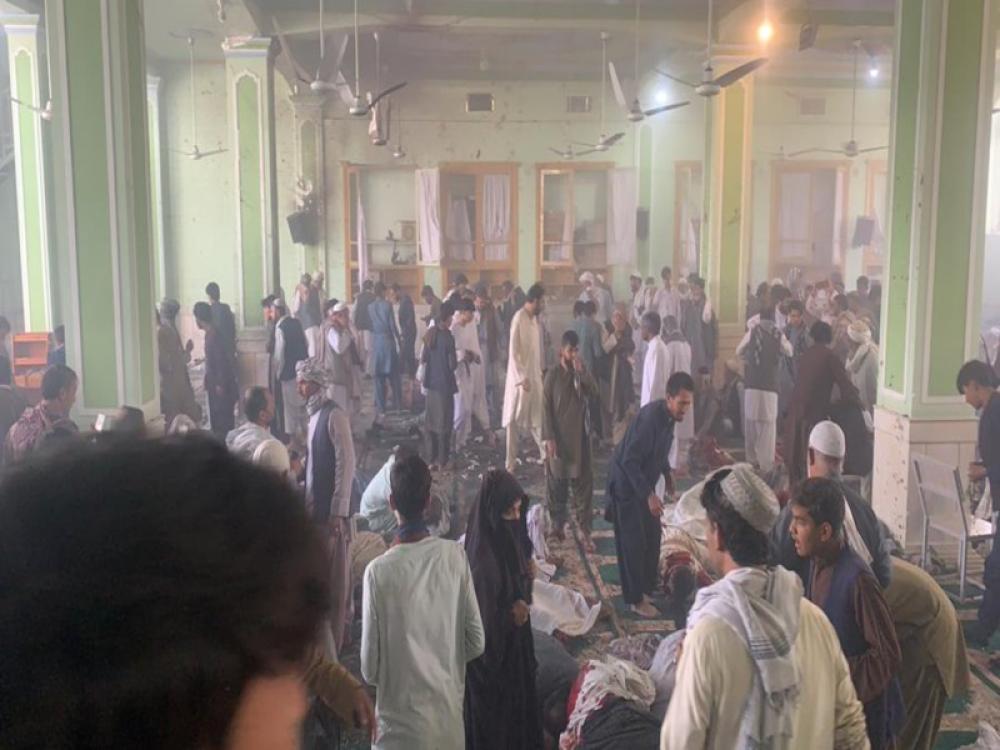 Image of Imam Bargah mosque shortly after the explosions, by local sources via Twitter

Kabul (JEN): A powerful explosion rocked a Shiite mosque in the southern Afghan city of Kandahar during prayers on Friday, killing at least 32 people and leaving more than 50 others wounded, AFP reported citing local health officials.

According to a report by the Associated Press (AP) citing an eye-witness, four suicide bombers attacked the mosque, and two of them detonated their payloads at a security gate, allowing the other two to run inside and blow up explosives in the congregation of worshippers, majorly from the Shia community.

WARNING: GRAPHIC CONTENT
Inside the Shiite mosque where a large explosion have occurred during friday prayer in Kandahar province.

Locals said Friday prayers at the Shiite mosque are typically attended by around 500 people, though it is still not clear how many worshippers were their during the suicide attack.

Kandahar city's health officials said injured people have been shifted to different health facilities and many of them are critical.

An explosion took place during Friday prayers of Shia brothers in Kandahar today & taken lives of large number of people & make many injured, that’s why we say that terrorists have no religion they are beasts. ISIS, TTP, Islamic Emirate all are same. pic.twitter.com/oJ3I0HgJdC

The spokesman for the Taliban-run Ministry of Interior, Qari Saeed Khosty, also confirmed the attack which has claimed 'a number of lives' at the mosque.

"We are saddened to learn that an explosion took place in a mosque of the Shiite Brotherhood in the first district of Kandahar city in which a number of our compatriots were martyred and wounded," Qari Saeed Khosty tweeted.

"Special forces of the Islamic Emirate have arrived in the area to determine the nature of the incident and bring the perpetrators to justice," he added.

Local media said no group has yet claimed responsibility for the blast.

Today's suicide attack in Kandahar's Imam Bargah mosque occurred just a week after a bombing by local Islamic State affiliate at a Shiite mosque in northern Afghanistan's Kunduz killed at least 46 people and wounded more than 90 others last Friday.