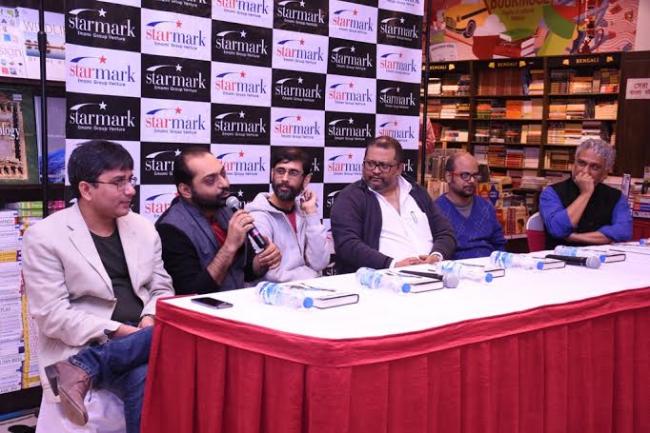 Kolkata, Dec 30 (JEN) For a Calcuttan living in Kolkata, a lot remains undiscovered and unspoken about, some of which were brought up in a discussion headed by Kunal Basu in a literary 'adda' in South City's Starmark outlet on Monday, where his new novel was released.

Aided by filmmakers Aniruddha Roy Chowdhury and Anindya Chatterjee and poets/lyricists Srijato and Chandril, Basu, whose latest release Kalkatta, a fictional novel that depicts the journey of a Gigolo in Kolkata, spoke about the various nuances one needs to identify as 'Kalkattans'. Basu, who said that he gets asked if this book has any relevance to a Mumbai or a Delhi surrounding, because of the suggestive title of the novel, said, "In every city you live in there is a Kalkatta. What is this Kalkatta, it is the city of the dispossessed." He also spoke about how taking a frequent walk in any city helps in understanding the nature of the place. The same sentiment echoed in Aniruddha Roy Chowdhury's statement. Roy Chowdhury said, "It is difficult to explore a city unless you take a walk." Taking a cue from Roy Chowdhury, his contemporary Anindya Chatterjee joked about long walks in a modern city life. "People walk a lot these days," Chatterjee said, "They walk during the Durga Pujas and while dating someone (Prem Kore Jokhon) as they are unsure where to go." Poet Srijato spoke about how long walks have helped him over the years, but maintains that he prefers to take them alone. "After a certain period, a person enjoys a lonely walk and I have reached that stage. I abhor the maddening Puja crowd and the mid night tantrums, they fail to excite me anymore." Basu, who spends most of his time in Oxford, the UK said, "The unknown excites me the most." The author also spoke at length about his Naxalite experience, as a budding student left wing activist in 70's Bengal. He shared anecdotes about how once he communicated with a Odiya community without having prior knowledge of the language. Chandril by far was the most entertaining man in the group as he dished away opposing theories, calling a walk the most boring thing to hit him. "Even Nietzsche said that most of the great ideas were conceived while taking a walk, so aren't we a bit harsh towards the physically challenged," the National Award winning lyricist joked. Speaking about an incident he had witnessed once in Kolkata where a poster of the movie 'Aagun' (fire) was engulfed in fire, he said, "At times I wonder that truth and cliche cohabit." Concluding the proceedings, Basu said that he does not identify himself as a nostalgia driven man, but loves to come to Kolkata every year. "I am not a nostalgia driven man, but I love Kolkata for two reasons. One, the language, where I can openly communicate with anyone in Bengali and two, I have my Greatest friends and and worst enemies here." Basu ended with a Rhetorical quote, "Can I get a better place that this one, perhaps no."           (Writing by Sudipto Maity, Reporting and Image by Subhodeep Sardar/IBNS)

#Kolkata is a living character in my latest novel   #Kunal Basu