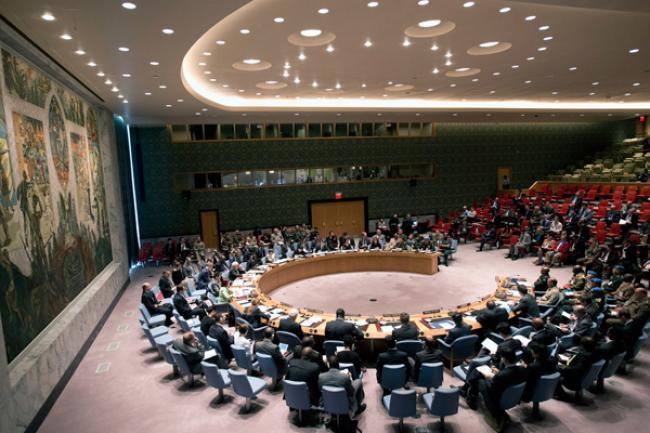 New York, Nov 29 (JEN) The United Nations Security Council has condemned in the strongest terms the attack on Thursday on a United Kingdom embassy vehicle in Kabul, Afghanistan, reiterating serious concern at the threats posed by the Taliban, Al-Qaida and other terrorist and extremist groups.

The attack – for which the Taliban has claimed responsibility – resulted in a number of deaths and injuries to civilians and security personnel. In a press statement issued on Thursday, the Council also reiterated that “no terrorist act can reverse the path towards Afghan-led peace, democracy and stability in Afghanistan, which is supported by the people and the Government of Afghanistan and by the international community.” In addition to the threats posed by the Taliban, Al-Qaida and other terrorist and extremist groups, the Council reiterated its serious concern at the threats posed by illegal armed groups to the local population, national security forces, international military, and international assistance efforts in Afghanistan, particularly in light of other terrorist attacks in the country. Reaffirming that terrorism in all its forms and manifestations is “criminal and unjustifiable,” and should not be associated with any religion, nationality, civilization or ethnic group, the Council underlined the need to “bring perpetrators, organizers, financiers and sponsors of these reprehensible acts of terrorism to justice.” As such, the Council urged all States, in accordance with their obligations under international law and relevant Council resolutions, to “cooperate actively” with the Afghan authorities in that regard. The Council also reaffirmed the need and reiterated its determination to combat, by all means, threats to international peace and security caused by terrorist acts, in accordance with the UN Charter and all obligations under international law, in particular international human rights, refugee and international humanitarian law. In the statement, the Council also expressed deep sympathy and condolences to the families of the victims – wishing the injured a speedy recovery – and to the people and Government of Afghanistan and the people and Government of the United Kingdom.