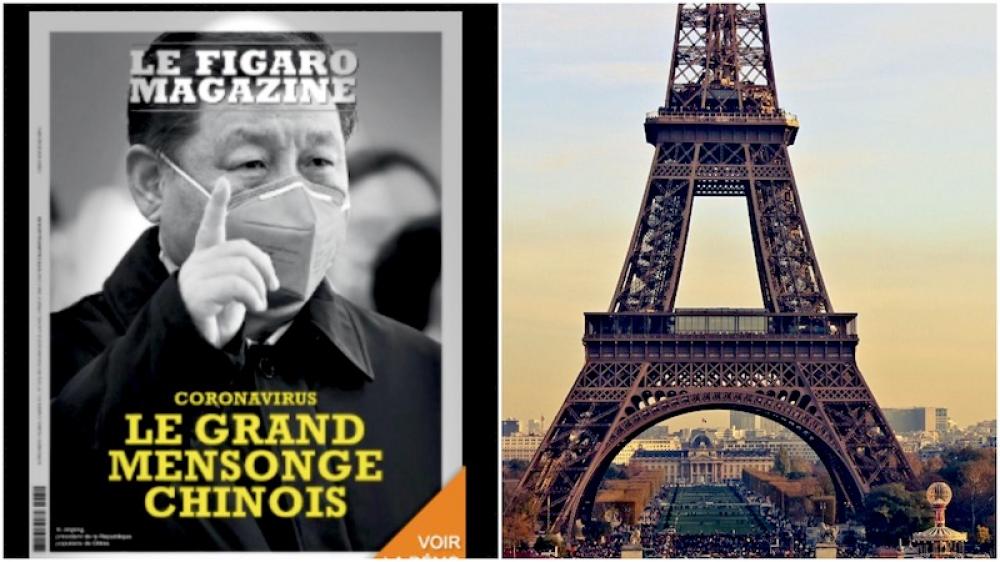 Paris: China has been facing backlash worldwide ever since it is known that the coronavirus originated from the nation and now the French media is slamming the country and its handling of the outbreak.

The feeling is evident from the title of the cover story of France's Le Figaro Magazine which read: 'The Great Chinese Lie’.

In the illustration of the news report, Chinese President Xi Jinping could be seen wearing a face mask and wagging his finger.

"It did not take more to revive all the speculation circulating for a quarter on the internet and concerning the true origins of Sars-CoV-2, scholarly name of the virus which causes Covid-19 and panics the planet," the magazine reported.

"Confined in an anxiety-provoking atmosphere and faced with a devilish dystopian scenario, the followers of the conspiracy theory give themselves to heart. Let it be said at the outset: the said virus is not a bacteriological weapon purposely manufactured by Asian Frankensteins for the arms industry," it said targeting China.

France 24 recently interviewed Taiwan’s Vice President Chen Chien-jen where he criticised China and claimed the Xi administration did not reveal the true figure of the victims of the pandemics initially.

Taiwan’s Vice President Chen Chien-jen, an epidemiologist by training, told France 24 that he refused to rule out the "possibility" that the coronavirus originated in a Chinese laboratory in Wuhan.

"The origin of the virus has to be examined scientifically and so far we can see that the virus originated from Wuhan. Whether it is from a laboratory or from the natural infection sources needs further confirmation," he told France 24, adding that the laboratory theory was "one of the possibilities".

He even claimed that China did not reveal the true figure of the victims of the pandemics.

Amid growing discontent against China internationally over the alleged epicentre of COVID-19 being Wuhan city and reports of silencing information on the death toll in the country, the French foreign office recently summoned the Chinese ambassador, Lu Shaye, to express its deep disapproval about Chinese diplomats’ claims that France had left its older citizens to die, media reports said.

Foreign Minister Jean-Yves Le Drian said in a ministry statement: "Certain recent public stances by representatives of the Chinese Embassy in France are not in keeping with the quality of the bilateral relationship between our two countries or with the relationships of trust and friendship between the French President and President Xi Jinping and between myself and my counterpart, Mr Wang Yi."

"I clearly expressed to the Chinese Ambassador to France my disapproval of certain recent remarks when he was summoned to the Ministry for Europe and Foreign Affairs in the morning of Tuesday 14 April," read the statement.

In the first, the ambassador claimed that amid the coronavirus outbreak “old-age pensioners in nursing homes are forced to sign statements foreswearing emergency treatment”, and that healthcare personnel in care homes “have abandoned their jobs from one day to the next, collectively deserted, allowing residents to die of hunger and illness”, reported The Irish Times.