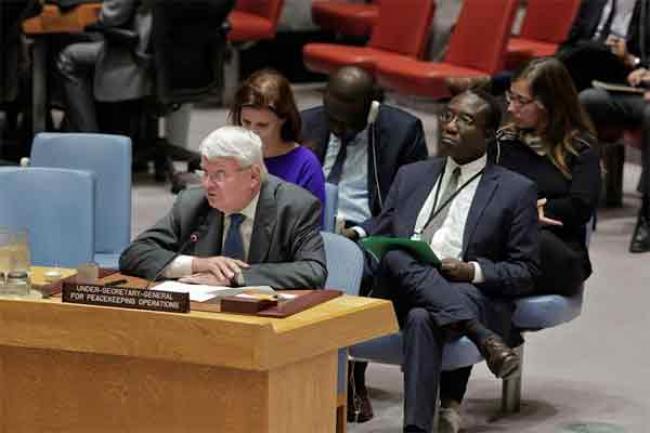 New York, Oct 5(Just Earth News): The security situation in Darfur, Sudan, remains volatile and the humanitarian impact of the conflict significant, the top United Nations peacekeeping official said on Tuesday, calling on the Government of Sudan and the international community at large to address the current challenges in the country.

“With the signing by all the Sudanese parties of the political road map proposed by the high-level panel of the African Union (AU), an important step in the peace process has been crossed,” said Hervé Ladsous, Under-Secretary-General for Peacekeeping Operations, as he briefed the Security Council.

“To consolidate this achievement, the parties should from now on implement both the letter and the spirit of the document and engage themselves in resumed negotiations towards arriving quickly at an agreement on ending hostilities and providing access for humanitarian aid,” he added.

Providing an overview of the situation in Darfur since his previous briefing to the 15-member body this past June,  Ladsous also introduced the latest report of the Secretary-General on the AU-UN Hybrid Operation in Darfur.

The Under-Secretary-General noted that despite access and reporting restrictions, the UN-AU Mission in Darfur (UNAMID) remains focused on its objective of protecting civilians and continues to facilitate the delivery of humanitarian assistance, while engaging the parties to immediately cease hostilities.

“UNAMID continues to be supportive of central and local government initiatives to restore peace and stability in the communities. The Mission remains focused on its core objective of protecting civilians. We call on the Government of Sudan and the international community to work closely, and in good cooperation, to address these challenges,”  Ladsous said.

Turning to other political developments, the Under-Secretary-General said that President Omer al-Bashir had dissolved some bodies established under the Doha Document for Peace in Darfur. On 26 September, the President had officially received the recommendations of the National Dialogue Conference, which he had pledged to implement following its conclusion on 10 October. Due to disagreements over that date, however, the process remained constrained,  Ladsous said.

On the security situation, the Under-Secretary-General highlighted that certain areas of central Darfur remained volatile, with fighting between the Sudanese army and the Sudan Liberation Army/Abdul Wahid, which remained outside the peace process.

Calm in other areas was disrupted by sporadic seasonal violence between pastoralists and farmers over the use and management of grazing land and water. In addition, outbreaks of inter-communal and intra-communal violence occurred in some hotspot areas amid a reduction in the number of large-scale conflicts, he said.

The local authorities continued to take measures to contain the situation by facilitating peace agreements and ensuring the presence of Government forces in volatile areas,  Ladsous said. The central government in Khartoum had also announced a strategy to address inter-communal conflicts and curb criminality through, among other measures, the regulation and control of weapons.

While that announcement was an “encouraging recognition of the seriousness of the situation,”  Ladsous said, complex governance and development challenges must be addressed in order to “restore the social fabric and the peaceful coexistence between the communities in a region crippled by a decade of conflict.”

Regarding allegations that the Government had used chemical weapons in Jebel Marra,  Ladsous said that the UN had not come across any evidence to support such clai He pointed out, however, that UNAMID had consistently been denied access to conflict zones in Jebel Marra, and that the Organization for the Prohibition of Chemical Weapons (OPCW) had stated, in an initial assessment, that it was not possible to draw any conclusions without further information and evidence being made available.

In that regard,  Ladsous encouraged the Government, which he noted was a signatory to the Chemical Weapons Convention, to maintain full cooperation with any future OPCW investigation.