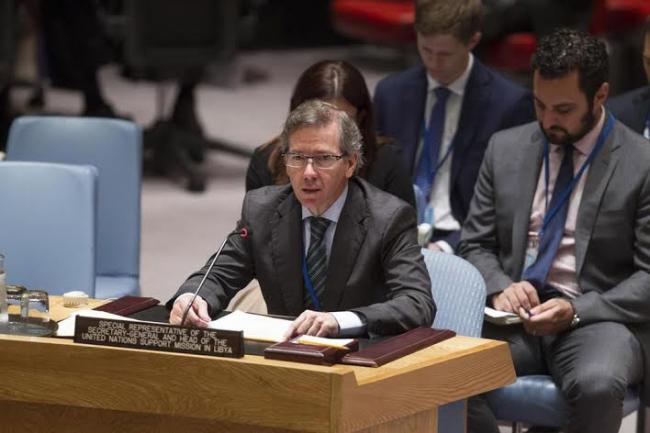 New York, Jul 16 (JEN): A peaceful transition in Libya will only succeed through a significant and coordinated effort in support of a future Government of National Accord and by ensuring that sufficient security is achieved throughout the country so that public administration can resume its key functions, the top UN official in Libya told the Security Council on Wednesday.

“A Government of National Accord can be the only interlocutor through which the growing threat of Da’esh [also known as the Islamic State of Iraq and the Levant, or ISIL] and its affiliate groups can be effectively tackled," UN Special Representative for Libya Bernardino León said as he briefed the Council on the situation in the country. Reiterating UN support in ensuring national ownership in the transition process, he also said, “I am confident that the international community is ready to offer the needed support based on the priorities that the Libyans will identify.” Over the past month, he explained, the situation in Libya has continued to deteriorate amid significant political fragmentation and violence.

The “chaos” on the ground has also given way to an expansion of extremist groups, with a “vacuum of authority” exploited by human smugglers, as many refugees, asylum seekers and migrants are using the country as a “launching area for an unprecedented surge in dangerous crossings of the Mediterranean.”

Nonetheless, León, who also heads the UN Support Mission in Libya (UNSMIL), said he was pleased to report to the Council that, on 11 July, a number of courageous Libyan leaders had initialed a political agreement at UN-facilitated talks that had been under way in Skhirat, Morocco.

He said, “This act signaled the adoption of a framework for further talks and has brought the country one step closer to ending the conflict and fulfilling the goals of the 2011 revolution.”

This agreement, he explained, will allow Libya to complete the transition that started in 2011.
Including guiding principles, it puts in place institutions and decision-making mechanisms to guide the transition until the adoption of a permanent constitution.

Reporting on the security situation on the ground, the Special Representative said that in western Libya, local ceasefires and reconciliation agreements have improved the security situation and allowed for an improvement in the humanitarian situation.
He said, “A growing rapprochement between the cities of Misrata, Warshafana, Zawia and Zintan has been instrumental in facilitating these ceasefires.”

In central Libya, Da’esh-affiliated militants had established full control over the city of Sirte and the surrounding coastal area. Misrata forces had withdrawn to the area of Abu Grain, some 75 kilometers east of Sirte, but continue to carry out airstrikes and block Da’esh advances westward.
But the prevailing political and security divisions within the country have prevented the development of a coordinated policy to deal with the threat of Da’esh affiliates, observed Léon.

He said, “The situation in Benghazi, birthplace of the revolution, remains of serious concern. We must refocus our efforts on this city in particular, to try and put an end to the fighting, which has caused so much destruction.”
The overall humanitarian situation continues to cause concern, Léon added, noting that the number of internally displaced doubled since last September.

Encouraged by the recent release of prisoners in various Libyan cities over the past weeks, León called for the release of “all those illegally detained” without further delay.
He said, “Such measures are not only a matter of human rights: they would contribute significantly to facilitating the next phase of the political dialogue and to reconciliation.”

In Tripoli, he continued, the last session of the trial of Saif al-Islam Qadhafi, Abdullah al-Senussi, and 35 other former regime officials for violations committed during the 2011 conflict, took place on 20 May, and the verdict is expected on 28 July.

“Libya must overcome this dark chapter in its history by holding those responsible for serious crimes accountable, in accordance with international standards for due process and fair trial.

Libya is at a critical stage, he concluded, and it is my duty “to urge all parties…to continue to engage constructively in the dialogue process.”
He underscored that spoilers should be held accountable, as they bear the responsibility of hindering the political agreement.

“Once again we must join together and send an unequivocal message that only through dialogue and political compromise, can a peaceful resolution of the conflict be achieved.”