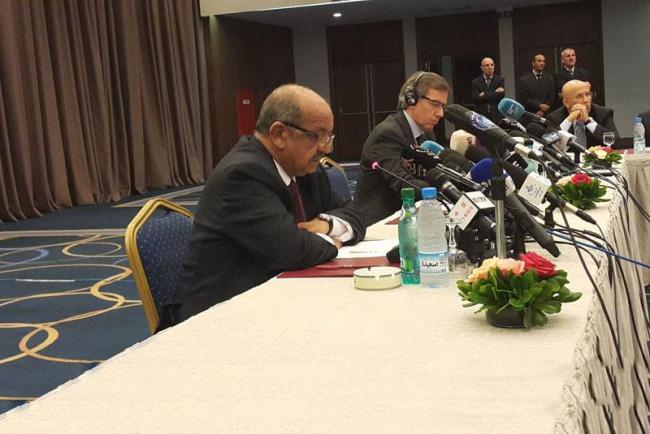 New York, Jun 4 (JEN): The only option Libya has, â€œthe only real alternative for the future,â€ is an agreement, Special Representative and head of the United Nations Support Mission in the country (UNSMIL), Bernardino LeÃ³n said at a meeting in Algeria with Libyan political leaders and activists on Wednesday.

“This is a moment of truth,” León underlined, reminding participants of the importance to reach a consensus before the month of Ramadan, “a moment of peace…of reconciliation”, in a country that is now “really at the limit.” Opening his remarks delivering a bleak economic appraisal, Léon warned that the Central Bank of Libya and the administrations will not be able to continue to pay salaries for much longer, “maybe one month,” and maybe six weeks after that, the financial situation will be so dire that Libya will be unable to function as a state.

Indeed, oil production had declined, but even if it were to recover, the current budget deficit could not be overcome and public finances would remain degraded.

“And this works for all sides, for all regions, for all cities across Libya,” he declared.

The political situation is no better, continued the UNSMIL chief, with “competing” institutions and governments so far unable to reach an agreement, “while we have seen terrorism [and the rise of] Da’esh (also known as Islamic State of Iraq and the Levant, or ISIL) in Libya, a country on the verge of becoming a “failed state” if rivals don’t set aside their differences.

On the security front, noting that today, people in both camps are fighting Da’esh, Léon said the two narratives, “the one that says [the city of] Tobruk represents the previous regime and the one that claims Fajr Libya [militias] represents terrorist organizations, are clearly finished today.”

He added, “There is no more room for these narratives. There is only room for a moderate Libya to agree on a unity government and on the main framework and agreement that will sustain this government. I think this should be the main message from this forum. Libyans are telling us very clearly enough is enough and the time has come to make this agreement.”

Underscoring the need to recognize all the actors involved, the UN believe they can propose a new draft which will keep all the positive elements agreed so far, but also address some of the remaining concerns, said Léon.

But it should be the final draft, he said. “We could reach, maybe, the perfect agreement with draft no. 20, but if the country collapses economically and financially, and if Da’esh now controls an important part of Sirte and continues to attack and controls other cities… […], what would be the relevance of draft no. 20 if the country does not exist anymore as a functional country?”

So, he concluded, it is crucial time to make decisions and agree on “a unity government that represents all Libyans.”