Geopolitics
Art & Culture / Entertainment
All paths of communication are not readily understood as we are controlled by divine forces: Dr. Marcia 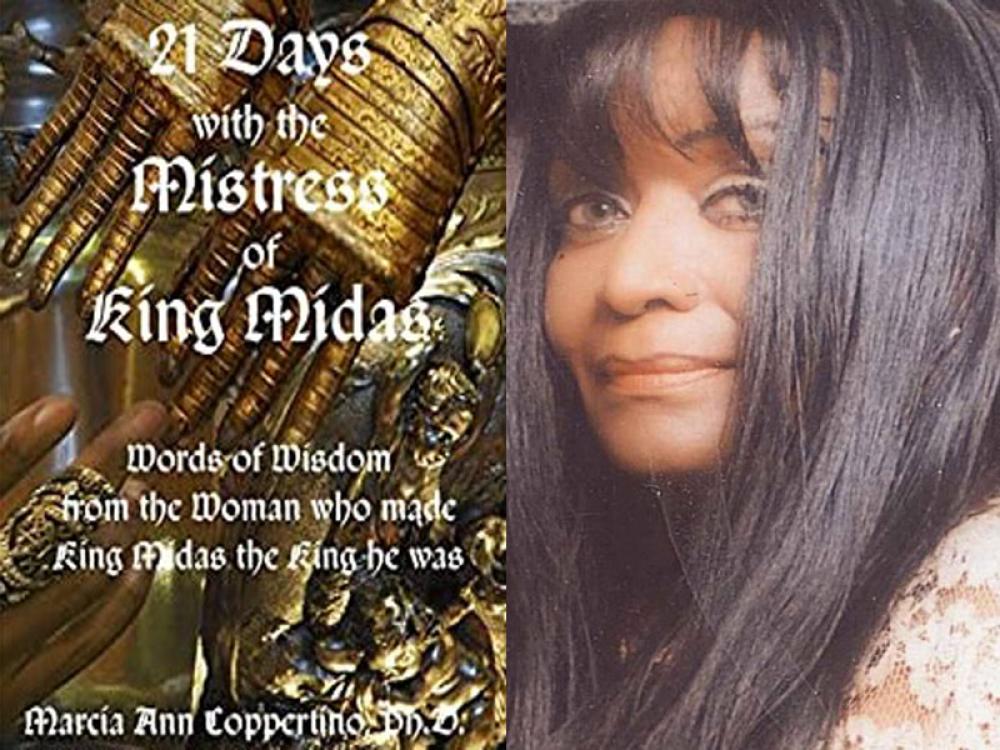 In the book “21 Days with the Mistress of King Midas”, Dr. Marcia Ann Mims Coppertino, the author of the book, keeps the readers entranced by the story of a common prostitute’s kindness towards a fallen king by letting him share her modest abode and heart and the way she transforms him with her ancient wisdom and knowledge to his return to victory in 21 days assigned to her for her tasks.

Although the story is suggestive of the nature of the relationship between King Midas and her mistress, the path of ancient wisdom with which the author presents the landscape as the fallen and the tired king and the mistress, the self-emancipated prostitute begin their journey adds a great sense of spirituality to the theme of the book.

Narrated in first-person by the mistress Dr. Marcia reveals the mistress does not feel any remorse when she leaves behind the role of a prostitute in the inn.

“It is far better to work with joy of heart and purpose than to endure a life overcome by feelings and sadness...I know my prayers and cries for help did not go unanswered by the gods,” she says.

The portrayal of elements of nature such as the landscape, forests, sunset, etc. is gratifying to both the mistress and the tired king following her and equips both with the visual clarity of thoughts.

The king following the mistress has lost his kingdom and finds solace and comfort in the company of the mistress who the author has portrayed as a guiding light thus uplifting the unsung heroines of the universe. The mistress did not try to find the name of the king and her words reflect the author’s message how the emotional and spiritual connection between two individuals transcends superfluousness.

“The true name or identity of a person is in the display of his character and spirit, not by the name he had no ability to select at birth.”

The element of supernatural beliefs in the story is introduced when the mistress places chrysanthemum flowers near the window believing that these would help reveal to her the innermost thoughts of the King while he was asleep. The soothing power of flowers also creates a melodious atmosphere.

As well, the holy purpose of Kapalbharati Yoga, proper diet, exercise, and fresh air for the health and well-being of a person is also glorified by the author as seen by the king becoming more confident and strong day by day.

The mistress’ words of encouragement that once King’s body is strong, he would regain both his mental and spiritual abilities to attain clarity of thoughts deeply touch the king’s heart. The mistress’ way of visualization and knowledge raises awareness to the readers that no profession is small or big and is not a criterion of one’s intellectuality and higher thinking. The author’s efforts at bringing equality between the people of all professions are ennobling.

With great patience, the mistress teaches the King to distinguish between true and false friends, enemies, as well as enemies within oneself, and how to use these enemies as teaching aids are uplifting to the readers as well as to the king. She also teaches the king to distinguish between different women in his life and be trustworthy of only those who can be loyal to him through thick and thin, in physical valor as well intellectually and spiritually. The abundance of vocabulary and knowledge used by the mistress is again an indication that one’s profession sometimes is not one’s choice and that it cannot curb the higher thinking capacity of a person.

The mistress also teaches the king the value of gratitude to God, prayers, and giving to others who are in need and be open to hospitality and flexibility of varied persons in his kingdom. From her own past painful experiences, she gives lessons to the king about the true nature and power of sex which should satiate the longings of the person without being disrespectful and selfish.

Her teachings about the wisdom which a king should possess to rule his kingdom successfully, a proper vision with which to fulfill his mission as a king, the righteous way to use his power and authority as a ‘power to love, power to be, power to accomplish’ is once again reminiscent of the message of Dr. Marcia in this book that intellect, spirituality, wisdom transcends and conquers all the hurdles in one’s life.

The ending of the story is both touching, and worthy of the noble and selfless service provided by the mistress to the King, and is transcendental. Dr. Marcia ends this phenomenal book with the following words which are both uplifting and reveal the true purpose in life and how the common man and woman who seek to rise above mediocrity can live up to their full potential.

‘It is in this “communication” process that we exist...and the belief that our existence has a purpose and as we live, the fulfillment of the purpose becomes manifest in the eyes and heart of the forces that do govern and send their light to brighten our way.”

This book not only keeps the readers entertained and engaged but also uplifts and encourages them to follow the path of selfless righteousness and the identification of your life’s purpose and its fulfillment by being enlightened by divine spirits.