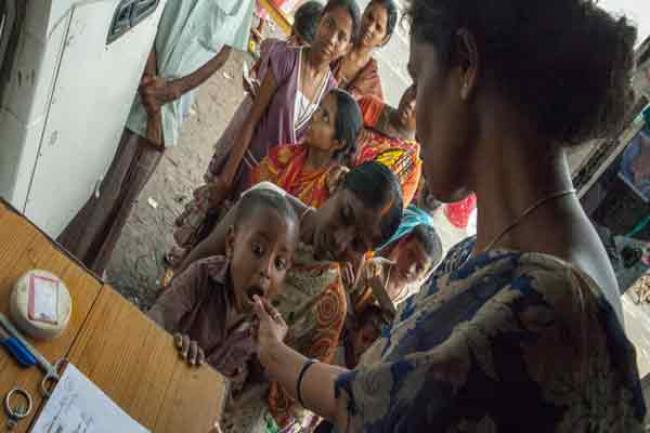 Kolkata, Feb 16 (Just Earth News): Calcutta Rescue, which works among the underprivileged people of Kolkata, especially in the slum areas, will launch its second street ambulance on Friday.
State Bank of India donated the Rs 16-lakh ambulance in recognition of the services rendered by Calcutta Rescue's first ambulance to almost 20,000 slum dwellers residing along the Canal East and Canal West neighbourhoods in north Kolkata.
Mohan Mitra, AGM (Public Relation & Community Service Banking) of SBI said, “SBI, as a corporate citizen, is working for the needy, economically backward & under privileged section of the society for a long time. It is a proud privilege for SBI to have an opportunity to work with such a great organisation such as Calcutta Rescue,  which has its footprint across the globe for a noble cause.”
Some of the key services provided by Calcutta Rescue's ambulance are getting children immunised, diagnosing cases of TB and leprosy and ensuring people with those diseases are cured, treating people with a wide range of injuries and medical conditions and providing vital health education.
The new ambulance and the eight member strong crew are due to start operating in 10 more bustees over the coming months, including Garden Reach, the site of the official launch.
In addition to medical support, the street ambulance crew also provides assistance such as high-protein food, soap, blankets and clothing to people who need them.
The running cost of the new ambulance is estimated to be Rs 35 lakhs per year and so the organisation is open to receiving donations for the same, it said in a release.
The new chief executive of Calcutta Rescue, Jaydeep Chakraborty, said, “Improving the country is the responsibility of all citizens, and when collaborations like the one between SBI and Calcutta Rescue occur, we are able to achieve so much more than what we could achieve alone. We are grateful to SBI, and we look forward to forging deeper ties with them in the quest to serve many of our fellow country-men and women in Kolkata and West Bengal."
The launch comes in the same week as screenings in Kolkata of an award-winning film about Calcutta Rescue’s founder, Dr Jack Preger.
Directed by Swiss supporter, Benoit Lange, the film Dr Jack, One Man, One Life, One Battle, won the jury award for best documentary at the 5th Mumbai Shorts International Film Festival and the Audience Award at the Solothurn Film Festival in Switzerland in January.
More Development
Photos