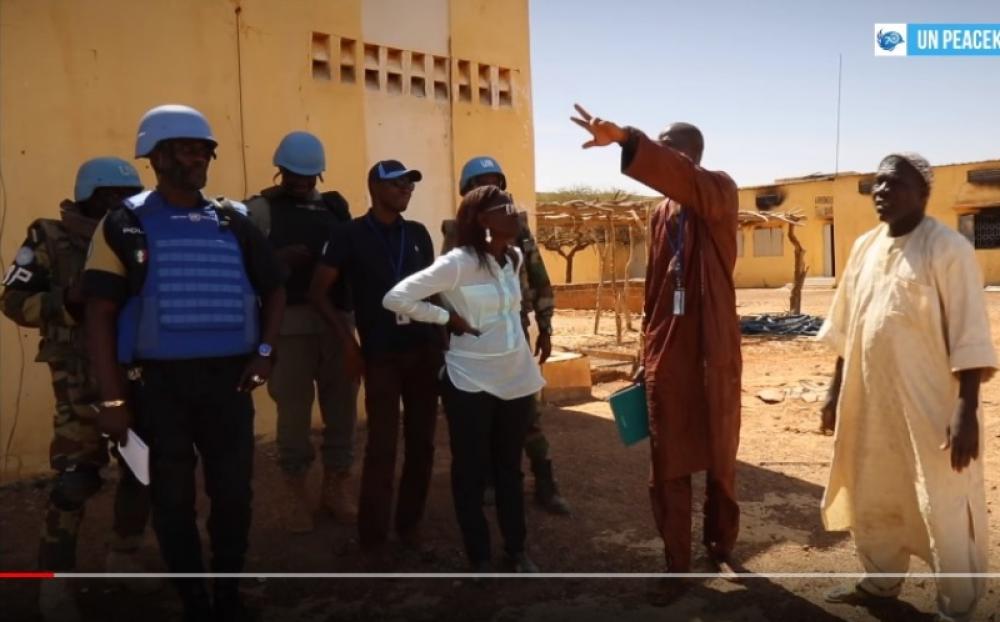 New York: On the eve of the International Day of United Nations Peacekeepers this Tuesday, in the dimly lit streets of Bamako, the Malian police set out to conduct a night patrol with the support of UN police officers.

UN staff reporting on the visit took the opportunity to go out with the team ahead of the arrival of Secretary-General António Guterres. The UN chief will be in Mali to mark the 70th anniversary of UN peacekeeping, alongside the dedicated men and women who serve in the Organization’s most deadly operation, known as MINUSMA, a French acronym that stands for the Multidimensional Integrated Stabilization Mission in Mali.

“Patrols are conducted to reassure the population, to help them overcome the feeling of insecurity. At the beginning of the crisis, people did not dare to go out because they were scared of armed groups and of attacks”, explains Masserigne Faye, Coordinator for the police component that’s integral to the mission.

Overall, the capital appeared calm and peaceful on Sunday night, with drivers happy to allow the joint patrol to look inside their vehicles as part of routine inspections.

“It's very good, it allows us to work freely”, said one taxi driver, Mamoutou Kané, after opening the trunk of his cab.

“We think it's reassuring for the population. We want it to last”, said another bystander, Boubacar Traoré, sitting outside a small grocery store in the Medina Coura neighborhood.

But it’s not the capital in the south of Mali causing the greatest security concerns at present, but rather the northern and central areas of the land-locked north-west African nation, that stretches deep into the Sahara Desert.

The first UN peacekeepers were deployed in Mali in 2013 following a violent insurrection by separatist rebels attempting to take control of the north of the country and a subsequent military-led coup. MINUSMA is there to help maintain a fragile peace agreement in support of the national authorities and provide protection for civilians caught up in conflict.

But with many peacekeepers now being targeted by armed groups fighting Malian Government forces, the mission faces huge dangers. The UN Secretary-General will show his solidarity with them on Tuesday, but he will also be expressing his solidarity with Muslims fasting for Ramadan. He himself will be observing the fast during his visit.

“Each peacekeeper in Mali, in performing their service, is facing sacrifice on a daily basis”, said the Special Representative for the Secretary-General, Mahamat Saleh Annadif, who is also head of MINUSMA, in an interview with UN News on Monday.

In March, during a key Security Council debate on improving UN peacekeeping operations, Mr. Guterres told Member States that “UN peacekeepers are often under-equipped, under-prepared and unready” adding that “our peacekeepers are vulnerable, and they are targeted for attack”.

He said three areas needed a fresh focus: more realistic expectations about what missions can achieve; making them stronger and safer; and mobilizing greater political support with well-structured, well-equipped, and better-trained forces.

To enhance the effectiveness and security of peacekeeping operations, the UN is conducting comprehensive reform of the whole peace and security pillar, including improving security for peacekeepers in the field and the “Action for Peacekeeping” initiative, with Mali a top priority.

MINUSMA has already taken measures on the ground to reduce casualties: “By increasing training, by increasing patrols, by taking precautions to inspect roads before trucks drive through them, by taking advantage of the arrival of combat convoy contingents, we have really made significant progress towards diminishing casualties”, said Mr. Annadif.

His Chief of Staff, Lizbeth Cullity, said that a recent attack on mission forces in May showed the impact of steps already taken to improve the preparation and safety of peacekeepers: “It was due to that kind of preparation, the rehearsal, the drills of going through that, just before the attack, that we believe that we were able to save lives”, she told UN News.

During his two-day visit, the UN chief is meeting troops and other MINUSMA personnel. He will also meet Mali’s President Ibrahim Boubacar Keïta and other government officials in Bamako.

On Wednesday, Mr. Guterres is set to leave the capital and travel to the regions, where he will meet with local authorities and UN staff, as well as women, youth and religious representatives.