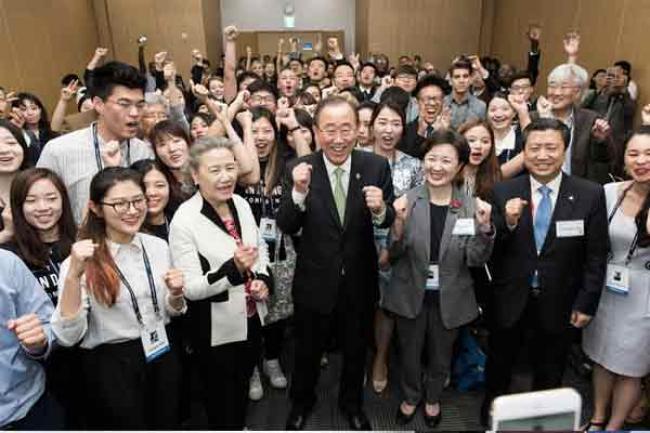 New York, May 31 (Just Earth News): On first day of the sixty-sixth United Nations Department of Public Information/Non-Governmental Organizations Conference in Gyeongju, Republic of Korea, Secretary-General Ban Ki-moon urged youth to continue to raise their voices in pushing governments to implement the 2030 Agenda for Sustainable Development.

“You have unlimited power, unlimited authority, legitimate prerogative to raise your voice. Make your governors, mayors, national assembly members – even professors and business communities – make them accountable,” he said at a youth caucus event. In a room filled to capacity, the UN chief urged youth to think about the circumstances in which people in other parts of the world live – underscoring the importance of tempering passion with empathy. “Without compassion, the world would be strange and miserable,”  Ban said. “Passion without compassion will lead to a strange way, undesirable way, sometimes destructive way and tragic way. When you have too much passion, that's what happens in many parts of the world. Therefore, passion should be accompanied with compassion […] that's my message to you.”  Ban also told the group that while they should be proud to be young, they must also be prepared for on Tuesday. Noting that his tenure as UN chief will end soon, he said, “who knows that [maybe] one of you will become Secretary-General of the United Nations,” he said to thunderous applause. Before the UN chief arrived, Juan Pablo Celis, Conference Co-chair of the Youth Sub-committee and NGO Youth Representative of the New York UN Association, told his peers that for the next three days, issues that linked education with conflict situations, youth employment and the Sustainable Development Goals, among others, would be discussed “through very creative and innovative methods, such as performances, technological interactions and live surveys.” And then he prompted everyone to be energetic, saying: “We are the youth of the conference and we have to be ready to make some noise!”