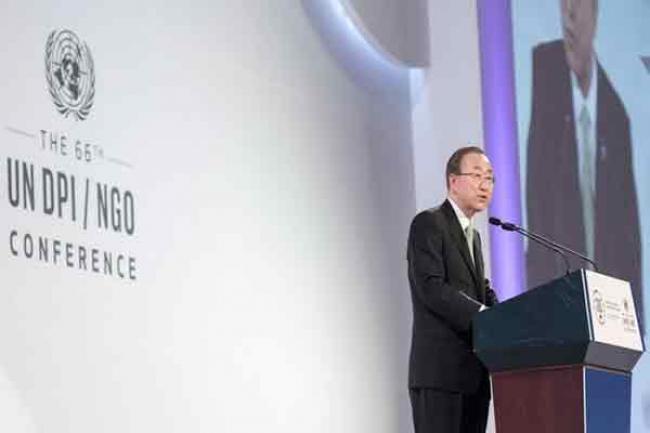 “We need governments, the private sector and civil society,”  Ban told the more than 2,000 people gathered for the opening session. “Without the participation of non-governmental organizations (NGOs) and civil society groups, no initiative, however visionary, can be fully achieved,” he added. From 30 May to 1 June, a series of roundtable discussions, workshops and youth caucuses with civil society representatives and groups will focus on education as an entry point towards realizing the SDGs. “Education is critical to nurture global citizens who can rise to the challenges of the 21st century,” continued  Ban, encouraging young people everywhere to be global citizens and for governments and NGOs to boost the participation of and with their national youth groups. “Let us work together to foster education for global citizenship – education that empowers people to contribute to our common future,” he underscored. “NGOs are on the vanguard of international action,” asserted the UN chief, adding that “throughout history, when governments reach a stalemate, NGOs work to break it.” Recalling that just four days ago, at the Jeju Forum for Peace and Prosperity, in Seoul, he had denounced the shrinking democratic space, and urged freedom for civil society organizations, NGOs and human rights defenders, the Secretary-General noted that unfortunately, such freedom is under threat, “including at the last place this should happen: at the United Nations.” “I am deeply disappointed that the Member States on [the UN Economic and Social Council] ECOSOC NGO Committee recently denied the Committee to Protect Journalists consultative status,” he told the Conference, adding that he was also opposed to the exclusion of LGBT organizations from the upcoming High-Level Meeting on Ending AIDS. “These NGOs are close to communities affected by the epidemic and they must be part of the response,” he stated. Calling on UN Member States to stop constricting NGO engagement, the Secretary-General said: “The United Nations should have a big tent under which everybody can have […] freedom of movement.” Indeed, such an approach had helped for the landmark 2030 Agenda for Sustainable Development and the Paris Agreementon climate change. “And NGOs are crucial to their success.” “When we implement these two [accords], I am sure that by the end of this century we will be able to live, regardless of where we may live, in a much better, healthier and more prosperous world,” said  Ban. Sharing the podium, Prime Minister of the Republic of Korea,  Kyo-ahn Hwang reaffirmed his country's commitment to fostering global citizenship. “We worked very hard so that global citizenship was reflected in the SDGs,” he said. “Global citizens need to fulfill the basic values of humanity. They need to be proactively involved in solving global issues. This conference, under the theme of 'Education for Global Citizenship: Achieving the Sustainable Development Goals Together' will encourage people to become involved.” Participants at the conference will examine the three pillars of formal education; informal education and training; and advocacy and public Information, as means to eliminate inequalities that create or perpetuate marginalization and disenfranchisement. Crosscutting themes, such as gender equality and climate change, will be tabled and learning will be examined from the perspective of marginalized and vulnerable groups, including indigenous peoples, and lesbian, gay, bisexual and transgender persons (LGBT). The event will culminate in an action agenda for NGOs and academia to harmonize and catalyze efforts for the successful implementation of the 2030 Agenda for Sustainable Development. Conference co-chairs, Dr. Scott Carlin, Associate Professor of Geography at Long Island University and Dr. YuKang Choi, NGO Representative to the U for Dream Touch for All, flagged the conference as an important opportunity to raise awareness and mobilize civil society around the SDGs. “The NGO/DPI Conference will bring the civil society voice to the United Nations, and foster NGO support for implementation of the 2030 Agenda,” said Dr. Carlin. Dr. Choi pointed out, “This is the first time the conference is being hosted in Asia,” calling it “an opportunity for NGOs in the region to tap into networks and to lobby governments for commitment to SDG implementation.” The Conference is being organized in cooperation with the NGO/DPI Executive Committee, the NGO community, the Government of the Republic of Korea and the National Organizing Committee of Korea.