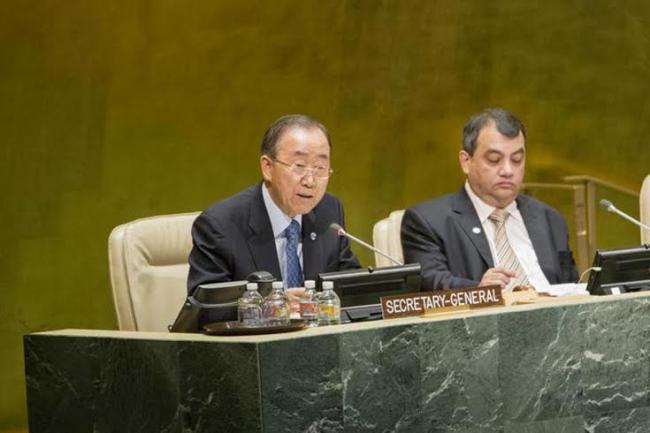 New York, Sep 1 (JEN): With speakers of parliament meeting at United Nations Headquarters at a moment when the world is gripped by multiple crises – displacement has soared to all-time highs and the threat of climate change grows by the day – Secretary-General Ban Ki-moon urged the legislators to help drive forward the new UN sustainable development agenda and ensure that civil society are equal partners in “building the future we want.”

“We are being challenged to strengthen our collective resolve to promote peace and security, sustainable development and human rights around the world,” said Ban, telling the Inter-Parliamentary Union (IPU) Fourth World Conference of Speakers of Parliament that, earlier this month, UN Member States took a bold step in this direction by concluding negotiations on the “ambitious and transformative” agenda for the next 15 years. The global parliamentary summit is held every five years. The current meeting will run through 2 September in New York and today’s opening session features addresses from Ban, IPU President Saber Chowdhury, UN General Assembly President Sam Kutesa and the UN Educational, Scientific and Cultural Organization (UNESCO) Special Envoy for Peace and Reconciliation Forest Whitaker. In his remarks, the Secretary-General said that the 17 Sustainable Development Goals that form the basis of the new UN agenda are people-centred and planet-sensitive.

They provide a plan of action for ending poverty and hunger, and a roadmap for building a life of dignity for all and they promise to “leave no one behind.”

Commending the parliamentarians of the world, and the IPU, for the valuable role they played in shaping the new framework, Ban underscored that their contribution to its implementation will be equally critical in ensuring that the agenda is translated from the global to the national.

“People will look to you to hold your governments accountable for achieving the goals, and to write the laws and invest in the programmes that will make them a reality,” he said, noting that while democratic principles also run through the entire document “like a silver thread,” Sustainable Development Goal 16 addresses democracy by calling for inclusive and participatory societies and institutions.

At the same time, the UN chief said the task of implementing and monitoring these goals is huge. It requires States to work in strong and close partnership with civil society of all stripes. This has never been more important.

And yet, for civil society, freedom to operate is diminishing – or even disappearing. Dozens of Governments have adopted restrictions that limit the ability of NGOs [non-governmental organizations] to work, or to receive funding, or both.

“As we embark on this new agenda, the State and civil society can and should be partners in building the future we want,” he said, emphasizing that the declaration the parliamentarians will adopt at the conference outlines their responsibilities in translating the voices of the people into meaningful action.

For his part, General Assembly President Kutesa said given their role as pillars of democratic governance, parliaments will have an important role in the implementation of the new development agenda.

“Parliamentarians should continue to ensure that the voices of the people are heard and included in the development process. This will enhance ownership of the new agenda and its implementation on the ground, which will be vital for its success,” he said.

Meanwhile, Kutesa said, it will be essential to carry forward the unfinished business of the Millennium Development Goals (MDGs), which have been incorporated in the Sustainable Development Goals SDGs.
In particular, greater attention will be needed in the areas of education, health, water and sanitation, advancing gender equality and women’s empowerment, and creation of employment, among others.

Parliamentarians will be essential to that effort, the Assembly President said, also spotlighting the critical role they must play in the protection and preservation of the environment, including through enacting appropriate legislation.

“As we work toward reaching a new, universally-binding climate change agreement at the Conference of the Parties on Climate Change (COP 21) in Paris this December, bold commitments that will protect our planet for generations to come are needed,” said Kutesa, stressing that parliamentarians and other stakeholders should remain actively engaged in collective efforts towards this noble goal.