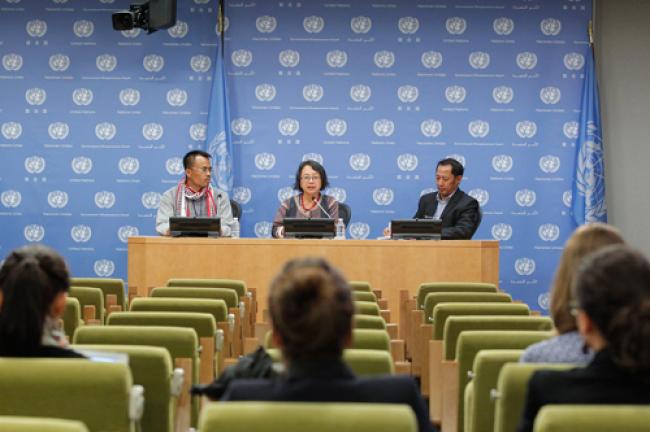 New York, May 20 (JEN): Non-recognition and marginalization of indigenous populations of Asia, home to two-thirds of the worldâ€™s 370 million indigenous peoples, and a growing concern of rising violence against indigenous women and girls surfaced at the mid-way point of the annual UN gathering of indigenous peoples around the world.
“Violence against indigenous women came out very, very strongly” during the half day dialogue Thursday, 15 May, on the Asian region of the 13th session of the UN Permanent Forum on Indigenous Issues at UN Headquarters, Forum member Raja Devashish Roy of Bangladesh told reporters at a press conference after the morning session.
According to the Permanent Forum, indigenous women continue to pay the price of structural forms of violence and discrimination, as well as from the persistence of conflicts and militarized areas in a number of Asian countries.
“Numerous cases of rape, sexual enslavement and also killing of indigenous women and girls in conflicts have been reported in a number of countries; very few have been investigated and the perpetrators prosecuted,” the Forum said quoting information compiled by UN agencies.
The Permanent Forum, comprised of 16 independent experts, is one of three UN bodies that is mandated to deal specifically with indigenous peoples' issues. The others are the Expert Mechanism on the Rights of Indigenous Peoples and the Special Rapporteur Rights of Indigenous Peoples.
Some 1,500 indigenous participants from all regions of the world have come together for this year’s two-week meeting from 12 to 23 May at UN Headquarters where they are engaging with members of the Permanent Forum, UN Member States, and UN agencies in advancing the rights of indigenous peoples.
Opening the session on indigenous peoples in Asia, home to more than 2,000 civilizations and languages, forum member Joan Carling of the Philippines noted positive developments addressing concerns of indigenous peoples in Indonesia, Nepal and Japan, as well as by UN agencies.
But Carling, in her overview of the Asian region, cited examples of the extent of marginalization of indigenous peoples in the Asian region. She noted that in the Philippines in the aftermath of the super typhoon Yolanda (known outside the region as "Haiyan"), which left some 4 million people homeless, among those victims are indigenous peoples who were marginalized in the delivery of aid and remain left out of rehabilitation efforts.
She noted that the Yolanda case demonstrates the vulnerability of indigenous peoples in disasters, saying that Philippines situation mirrors indigenous people victims of tsunamis in Indonesia, Malaysia and Thailand.
Carling also referred to how Asian indigenous peoples “are sacrificed in the name of development,” often experiencing displacement and relocation from their traditional territories, and dispossession of their lands and resources by projects like dam building. The building of 200 dams across Asia is likely to displace indigenous peoples and impact their livelihood, she said.
According to Dalee Sambo Dorough, Chair of the UN Permanent Forum on Indigenous Issues, “Indigenous peoples in Asia are among the most discriminated against and are economically, socially and politically marginalized.”
“It is time that the free, prior and informed consent of indigenous peoples is effectively implemented in order to address the negative impacts of militarization and economic liberalization on the territories of indigenous peoples, in Asia and across the globe,” said Dr. Dorough.
The Indigenous Peoples of Asia include groups that are often referred to as tribal peoples, hill tribes, scheduled tribes, janajati, orang asli, masyarakat adat, adivasis, ethnic minorities or nationalities.
The Permanent Forum on Indigenous Issues was established by the UN Economic and Social Council (ECOSOC) in July 2000. It provides expert advice and recommendations on indigenous issues to the UN System through ECOSOC; raises awareness and promotes the integration and coordination of relevant activities within the UN System; and disseminates information on indigenous issues.
Briefing on indigenous issues from left: Jiten Yumnam of the Meitei people of Manipur State, India; Victoria Tauli-Corpuz, an Igorot from the Philippines and Raja Devasish Roy of the Chakma people in Bangladesh. UN Photo/JC McIlwaine
More People
Photos