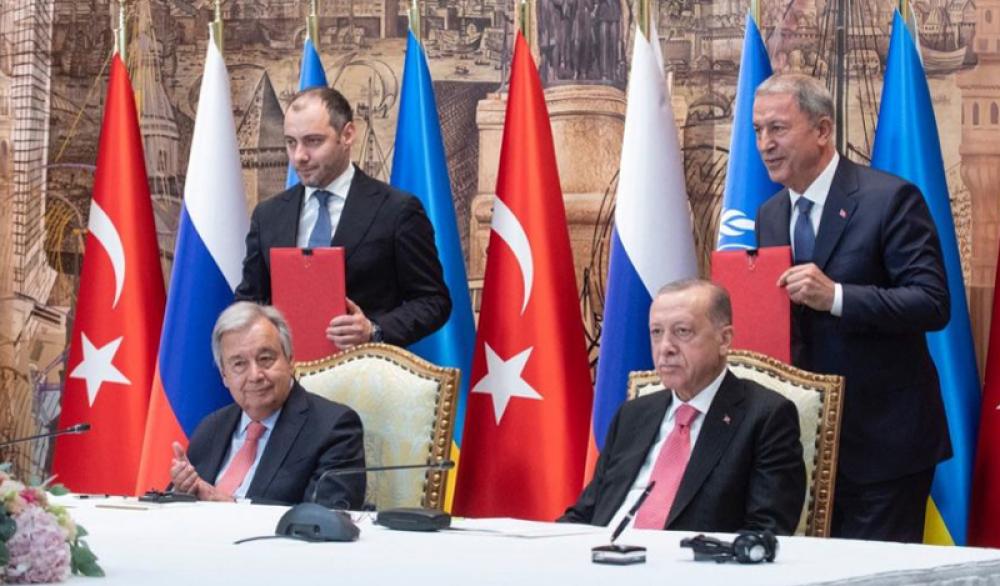 New York: An “unprecedented agreement” on the resumption of Ukrainian grain exports via the Black Sea amid the ongoing war is “a beacon of hope” in a world that desperately needs it, UN Secretary-General António Guterres said at the signing ceremony in Istanbul, Türkiye, on Friday.

The UN plan, which also paves the way for Russian food and fertilizer to reach global markets, will help to stabilize spiralling food prices worldwide and stave off famine, affecting millions.

Russian and Ukrainian Ministers signed the Black Sea Grain Initiative, facing each other at opposite ends of the table, while the Secretary-General and Turkish President Recep Tayyip ErdoÄŸan sat in the centre.

“Today, there is a beacon on the Black Sea,” the UN chief said, speaking prior to the signing. “A beacon of hope – a beacon of possibility – a beacon of relief -- in a world that needs it more than ever.”

Mr. Guterres thanked President Erdogan and his government for facilitating the talks that led to the deal.

He commended the Russian and Ukrainian representatives for putting aside their differences in the common interests of humanity.

“The question has not been what is good for one side or the other,” he said. “The focus has been on what matters most for the people of our world.  And let there be no doubt – this is an agreement for the world.”

Ukraine is among the world’s leading grain exporters, supplying more than 45 million tonnes annually to the global market, according to the UN Food and Agriculture Organization (FAO).

The Russian invasion, which began on 24 February, has sparked record food and fuel prices, as well as supply chain issues, with mountains of grain stocks stuck in silos.

In addition to stabilizing global food prices, the agreement “will bring relief for developing countries on the edge of bankruptcy and the most vulnerable people on the edge of famine,” said Mr. Guterres.

“Since the war started, I have been highlighting that there is no solution to the global food crisis without ensuring full global access to Ukraine’s food products and Russian food and fertilizer.”

The Secretary-General also announced the establishment of a Joint Coordination Centre to monitor implementation.  It will be hosted in Istanbul and will include representatives from Ukraine, Russia and Türkiye.

Inspection teams will monitor the onloading of grain at the three ports. Ukrainian pilot vessels will guide the ships through the Black Sea, which is mined, after which they will head out through the Bosphorus Strait along an agreed corridor.

Ships going into the ports also will be inspected.

Mr. Guterres acknowledged “the long road” and weeks of around-the clock negotiations leading up to the landmark agreement.

In April, the Secretary-General met with Russian President Vladimir Putin and with Ukrainian President Volodymyr Zelenskyy to propose a plan. The UN has been "working every day since", he said.

Two UN Task Forces were established in parallel on the talks - one focused on the shipment of Ukrainian grain through the Black Sea, which was led by UN humanitarian affairs chief Martin Griffiths, and the other on facilitating access of Russian food and fertilizers, headed by Rebecca Grynspan, Secretary-General of the UN trade and development body, UNCTAD.

Mr. Guterres pledged the UN’s full commitment to the agreement, and urged all sides to do the same.

“This is an unprecedented agreement between two parties engaged in bloody conflict. But that conflict continues,” he said, noting that people are dying every day as the fighting rages.

“The beacon of hope on the Black Sea is shining bright today, thanks to the collective efforts of so many.â€¯In these trying and turbulent times for the region and our globe, let that beacon guide the way towards easing human suffering and securing peace.”