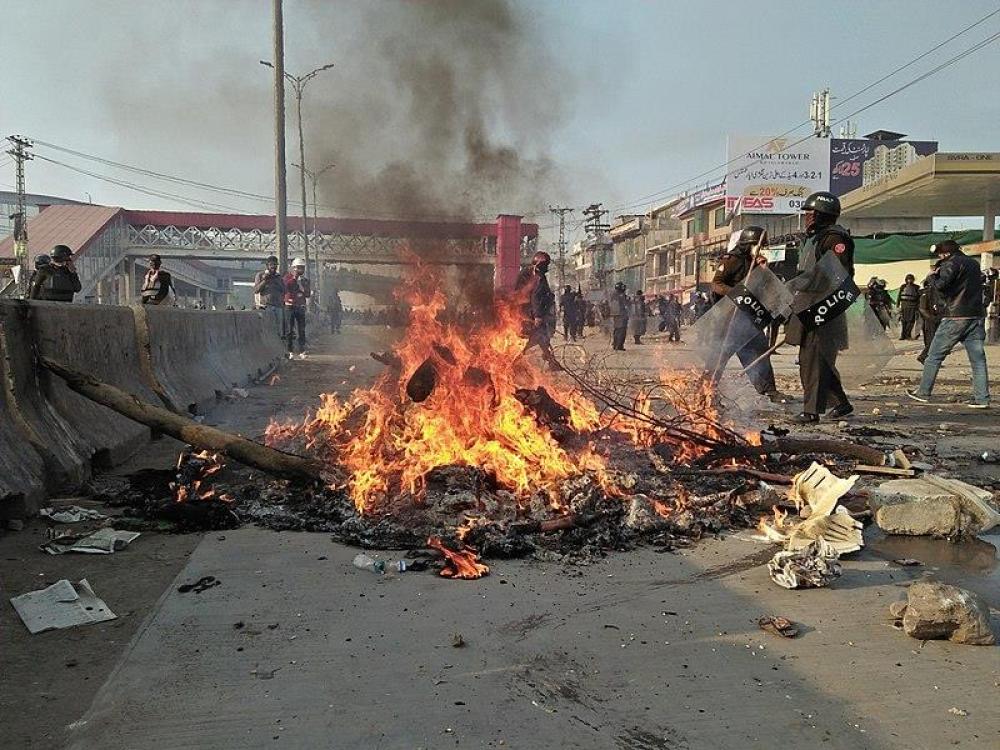 Islamabad: Amid its worsening ties with France over Islam, Pakistan's Information Minister Fawad Chaudhry on Tuesday said the government would not take any dictation (from the West) to settle internal issues, including action against the banned far-right Islamist group Tehreek-i-Labbaik Pakistan (TLP).

He made the remarks while attending a press conference after a federal cabinet meeting.

“We will not take action against anyone on the directives of any country,” Fawad Chaudhry was quoted as saying by Dawn News, while replying to a question about European Parliament’s recent resolution seeking withdrawal of GSP Plus status of Pakistan.

Later, talking to Dawn, the minister claimed that the issue of GSP Plus status and EU Parliament’s resolution was not discussed in the cabinet meeting.

“However, the government is firm in its stance that it will not take any dictation on internal issues,” he added.

Chaudhry said action that had been taken against the TLP which led to its ban was the government’s own decision because the party had violated Islamic norms and laws of the country.

Pakistan witnessed violence protests by  members of the Tehreek-e-Labbaik Pakistan party who were  allegedly outraged by French government's support for magazines publishing cartoons of Prophet Mohammed.

The Pakistan government last month formally banned the TLP after days of violent protests by the members of the radical islamist group following the arrest of their leader.

Since the last year, soon after the controversial remarks by French President Emmanuel Micron on Islam,  the TLP has been demanding the expelling of the French Ambassador from Pakistan and a ban on the import of goods from France. The government, however, later refused to follow these demands.

However, the government's handling of the TLP issue has been questioned by even the country's police force.

Several Pakistan police force members have said there is a growing sense of “betrayal” among their colleagues after the government negotiated with and met the demands of the Tehreek-e-Labbaik Pakistan party (TLP) despite officers being “killed, tortured and humiliated” by the group’s supporters during protests last month.

Demonstration turned violent in Pakistan last month after TLP chief Saad Rizvi was arrested in Lahore for threatening the government with rallies if it did not expel the French envoy to Islamabad over cartoons of the Prophet Muhammad (peace be upon him) published in France last year.

According to reports,  six policemen were killed and over 800 injured during the incident.

A policeman, who was taken hostage and ultimately released by the TLP in the eastern city of Lahore, the center of the violence, told Arab News it was “highly demoralizing” that the government had released rioters who had assaulted police.

“There is no problem in negotiations with protesters,” he told Arab News in an interview last week, declining to be named as he was not authorized to speak to the media on the record. “But how can you set those free who have killed, tortured and humiliated law enforcers?”

Another senior police officer said, “The police don’t see any point in performing their duties after what has been done to us."

“We don’t have answers to the questions our staff asks us, and we don’t know how to motivate them after this disgrace," the police officer told Arab News.

Saleem Vahidy, a former deputy inspector general of Sindh police, said the confidence of the force has “hit rock bottom.”