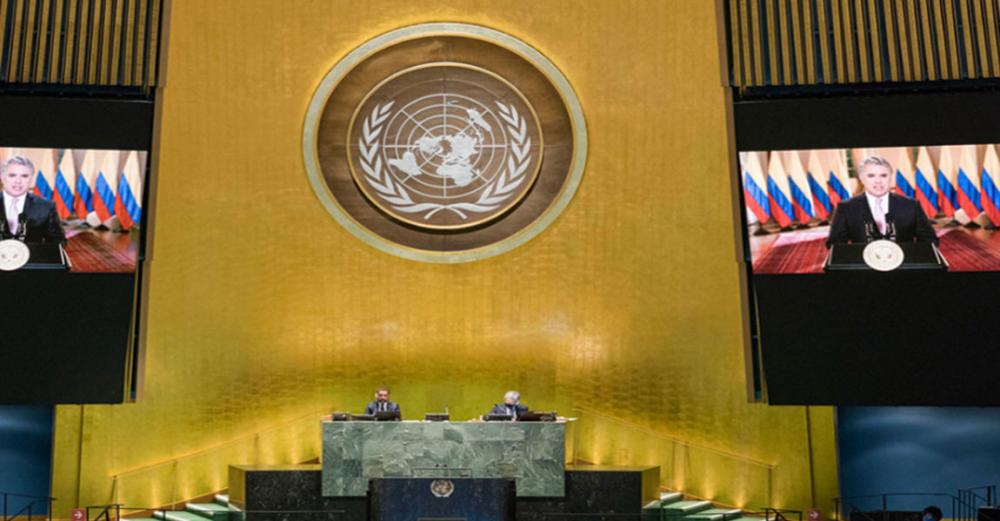 New York: Facing the coronavirus pandemic, the global community is at an inflection point, which should spur fresh thinking about broader international cooperation and way to ensure a sustainable and fair future for all, Iván Duque, the President of Colombia told the UN General Assembly on Tuesday.

In a pre-recorded virtual address to the world body’s annual high-level segment, leader of the South American country highlighted his Government’s efforts towards environmental protection and in the fight against climate change. He also stressed that Colombia remains committed to peace and in the battle against drug trafficking.

“Now that we are looking to reactivate our economies and our productive lives, it is necessary that environmental sustainability be the meeting point for the construction of a more sustainable, more responsible world,” he said.

Mr. Duque stressed that the current COVID-19 pandemic has spotlighted the close relationship between human health and the health of ecosystems, whose decrease “puts our survival” at risk.

“Colombia has achieved a cumulative reduction of 30.9 million tons of CO2 and we have fought against deforestation like at no other time in the history of our country, so we include the defense of the environment as a [part of] or national security efforts,” he explained.

As part of the Leticia Declaration and Proposals for Action, Colombia has joined seven States in an action plan for the sustainable development and conservation of the Amazon region, he added.

The president added that actions have been taken to protect the Amazon, tropical forests and oceans, and called on all countries in the world to also protect high mountain ecosystems.

“Colombia is home to half of the world's paramos, and today I invite you to join us in creating a global strategy for the defense of the paramos with which we guarantee the survival of these ecosystems and the sustainability of the communities,” he stated referring to Colombia’s fragile, high-altitude ecosystems.

‘Colombia is united in peace’

President Duque went on to honor the victims of violence during his speech and praised the work of social leaders who work to build a more dignified and generous society, and who, despite the difficulties, do not cease in their efforts.

“Today in Colombia there are no dilemmas between friends and enemies of peace, today we are a single country that advances regardless of whether the wind is in favor or against it,” he said.

The President thanked the UN Verification Mission for its support and once again highlighted his Government’s policy of ‘Peace with Legality’.

“This Government has designed a policy of Peace with Legality based on social stabilization and institutional consolidation of the territories historically hardest hit by violence and poverty,’ he explained.

The President said that Colombia has experienced violence and poverty and is committed to building a sustainable future.  It “is one country that moves forward, whether the wind is behind us or not,” Mr. Duque stressed.

Yet all the efforts it is making have a common threat, that of drug trafficking and the illicit economy it generates. Trafficking breeds all kinds of corruption, and feeds trafficking in persons, illegal mining and deforestation.  It breaks families and destroys social values. He called for the joint action of all States with a sentiment of co‑responsibility.