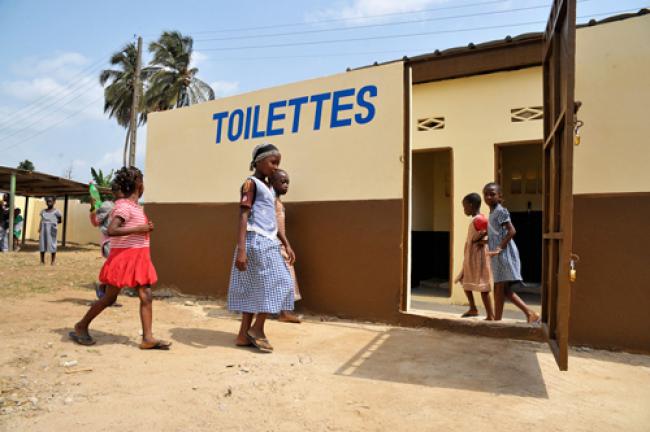 New York, Nov 20 (JEN): With its first official observance of World Toilet Day, the United Nations Tuesday called on the international community to help break taboos around toilets, which are still out of reach to more than one-third of the global population, and make sanitation a global development priority.
“Despite the compelling moral and economic case for action on sanitation, progress has been too little and too slow,” Secretary-General Ban Ki-moon said in his message for the Day, noting that sanitation is central to human and environmental health, and essential for sustainable development, dignity and opportunity.
Of the eight anti-poverty targets known as the Millennium Development Goals (MDGs), the sanitation target is the most off-track with more than 80 per cent of countries behind in the national targets that they set.
While six billion people worldwide have mobile phones, only 4.5 billion have access to toilets or latrines – meaning that 2.5 billion people, mostly in rural areas, do not have proper sanitation, according to UN figures. In addition, 1.1 billion people still defecate in the open.
According to a joint UNICEF and World Health Organization report this year, the largest number of these people are in India (626 million), followed by Indonesia (63 million), Pakistan (40 million), Ethiopia (38 million), and Nigeria (34 million).
‘Without access to improved sanitation’ is a “euphemism to describe the undignified life of billions of people”, said Catarina de Albuquerque, the UN Special Rapporteur on the human right to safe drinking water and sanitation. “I am disappointed with the slow and insufficient progress in providing these services despite the significant political and legal commitments understand in the last years.”
Poor water and sanitation cost developing countries around USD 260 billion a year - 1.5 per cent of their gross domestic product (GDP), the UN reported, while every dollar invested could bring a five-fold return by keeping people healthy and productive.
Earlier this year, Ban launched a Call to Action on Sanitation to end open defecation by 2025 and build on existing efforts, such as Sanitationand Water for All and the Sanitation Drive to 2015, the date to reach the MDGs.
“Sometimes it’s a topic that we joke about. But if 20 school buses crashed on First Avenue Tuesday, I would guarantee that there would be a response,” Theresa Dooley, Senior Advisor, Sanitation and Hygiene at the UN Children’s Fund (UNICEF) told journalists in New York. “And the reality is that that is the number of children that die each day as a direct result of not having access to sanitation.”
An estimated 1,400 children under the age of five years old die each year as a result of diarrhoea directly linked to a lack of access to safe water, sanitation and hygiene.
Despite the figures, more needs to be done to bring the “taboo subject” of toilets and open defecation from the shadows, discuss it frankly, and agree on tackling the problem, the UN official said.
Journalists also heard from Karen Tan, Permanent Representative of Singapore, which had been instrumental in galvanizing support within the General Assembly to designate 19 November as World Toilet Day.
More than 100 Member States co-sponsored the resolution ahead of its July adoption, Tan said, significant of the “universal recognition to act on this need and representing a new universal commitment.”
Adopting the resolution, the 193-member Assembly urged UN Member States and relevant stakeholders to encourage behavioural change and the implementation of policies to increase access to sanitation among the poor, along with a call to end the practice of open-air defecation, which it deemed “extremely harmful” to public health.
The resolution also recognizes the role that civil society and non-governmental organizations play in raising awareness of this issue. It also calls on countries to approach sanitation in a much broader context that includes hygiene promotion, the provision of basic sanitation services, and sewerage and wastewater treatment and reuse in the context of integrated water management.
Later Tuesday at the UN Headquarters in New York, the Permanent Mission of Singapore to the UN will organize a seminar with participation of the Office of the current President of the General Assembly, on challenges of sanitation.
World Toilet Day has previously been marked by international and civil society organizations all over the world. However, it was not formally recognized as an official UN day until this year.
UN Photo/Patricia Esteve
More Environment/Science
Photos