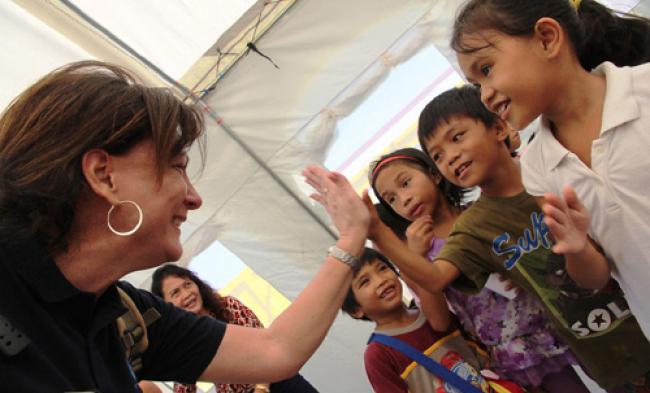 “We saw the enormity of the destruction that communities in the path of the storm endured. We also saw the great progress that has been made in providing people with food, shelter, and other critical assistance,” said Resident and Humanitarian Coordinator Luiza Carvalho. “But the needs remain enormous.” Nearly five weeks after Typhoon Haiyan struck on 8 November, donors got a first-hand look at the response and progress. Ms. Carvalho, who jointly led the mission accompanied by Department of Social Welfare and Development (DSWD) Secretary Corazon Soliman, surveyed the areas with representatives of the Embassies of Australia, Canada, Germany, Japan, the Netherlands, Norway, Switzerland and the United Kingdom, the Spanish Agency for International Development Cooperation, and representatives of the Philippine Disaster Recovery Foundation. At the Palo Central School in Tacloban, they met children signing carols at a temporary learning centre. The group also surveyed a DSWD operations centre for Eastern Visayas region, the logistics hub for aid flowing into the area and Barangay 88, a neighbourhood where a local leader said 1,000 people died in the storm. Secretary Soliman said that in Eastern Visayas region, 420,000 homes were completely destroyed and another 200,000 were damaged, leaving 280,000 families displaced. “The massive relief effort in the region has included the distribution of 3 million bags of food,” she said. “We are grateful for the solidarity and support donors have provided. We need this to continue.” In Guiuan, the delegation saw emergency shelter for families whose homes were wiped out by the storm surge. “I was encouraged to hear that just over a month after the disaster, the communities and authorities in Guiuan were engaged in searching for durable shelter solutions for the displaced families,” Ms. Carvalho said. In Ormoc, the mission saw a crew clear debris from a schoolyard, just one example of the cash-for-work opportunities that are being provided in the aftermath of the typhoon.