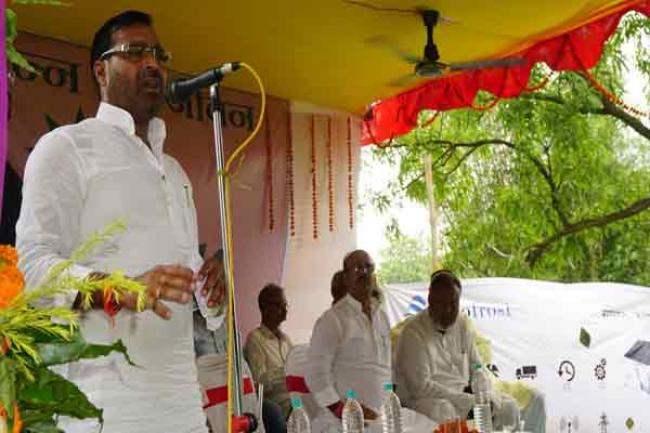 New Delhi, Aug 14 (Just Earth News): Greenpeace volunteers celebrated alongside farmers in Kedia, as the Bihar Labour Resources Minister Vijay Prakash inaugurated the state's first ever solar powered cold storage at Kedia in Jamui on Saturday.
"Kedia’s farmers have become an example for farmers across India by their sustained efforts towards ecological farming," a statement by the NGO claimed.
The installation of a crowd-funded, solar-powered, cold storage facility is an achievement for thiscommunity, and marks the beginning of a new chapter in the success of ‘The Kedia Model.’

“As India approaches its 69th Independence Day, we celebrate together a new, meaningful freedom in Kedia,” said Ishteyaque Ahmed, Greenpeace Campaigner.
"Kedia is celebrating freedom from harmful agro-chemicals, freedom from the crippling debts incurred due to high input costs, and dependence on an unstable, exploitative market, and relative freedom from erratic climate conditions that see so much food going to waste,” Ahmed said.

The installation of the Eco-frost cold storage comes as a boon to the farmers of this small village.
Besides being environment-friendly, the solar-powered freezer will help farmers resist the pressure to sell their produce at exploitative prices.
By providing a way to extend the shelf-life of their produce, the freezer gives farmers a degree of control over fluctuating market conditions, so that they can secure better prices and higher returns for their products. By enabling the safe storage of their seeds for future harvests as well, the facility provides the farmers financial security, and greater control over their futures.

Sunita Devi, one of Kedia’s farmers, said, “Uptil now we couldn’t afford to grow vegetables commercially, because the lack of storage facilities meant that they would start to rot before we could sell them profitably. Now, the cold storage will ensure less wastage of our produce, and allow us to grow vegetables that can fetch us about Rs 500 a day.”

Bought through individual donations secured via a Greenpeace-managed crowdfunding campaign, the eco-frost facility is a functional reminder of the colossal support Kedia has received from people across India.
A number of Bollywood celebrities joined in, urging their fans to raise #Support4Farmers.
The initiative caught the imagination of citizens in far-off cities, reflecting their aspiration for a future free of toxics in their food, and their empathy for the current plight of small farmers in India.

Priya Rajesh Unnithan, who has donated, said, “This is a great step towards helping our farmers. Every year tonnes of grains and other food products get wasted in our godowns, while India continues to live with poverty. Cold storage units are the need of the country today, and a solar-powered one is doubly beneficial.”

Acknowledging the unconditional support and encouragement from local administration, government schemes and people of Kedia, Greenpeace Campaigner Ishteyaque Ahmed noted, “In less than two years the perseverance shown by the farmers has resulted in the successful creation of the Kedia model. This model can easily be replicated all over the country and has the potential to bring a paradigm shift in Indian agriculture.”
More Development
Photos