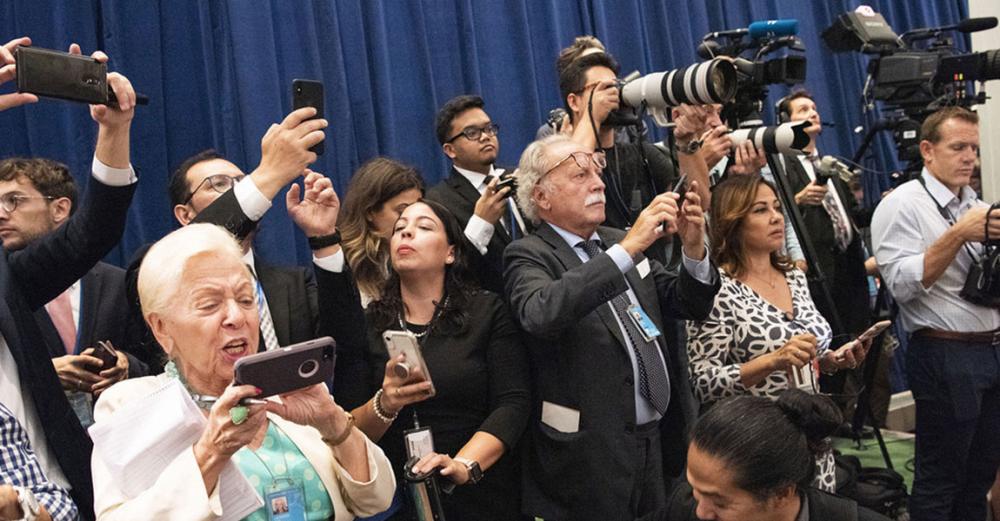 New York : The UN Secretary-General is calling for greater protection of journalists who are providing the “antidote” to what he has characterized as a pandemic of misinformation surrounding the COVID-19 crisis.

António Guterres made the appeal in a video message for World Press Freedom Day, observed this coming Sunday, in which he underscored the crucial role media has in helping people make informed decisions.

He added that under the current circumstances, those decisions can make the difference between life and death.

“As the pandemic spreads, it has also given rise to a second pandemic of misinformation, from harmful health advice to wild conspiracy theories”, he said.

As the COVID-19 crisis has deepened, both the UN chief and the World Health Organization (WHO) have been focused on countering the COVID-19 “infodemic”.

In late March, the Secretary-General announced the launch of a communications strategy to fight the rise in misinformation and conspiracy theories surrounding the new disease.

Guterres urged governments to protect journalists and others who work in media, and to uphold press freedom.

He said while temporary movement constraints are essential to beat back COVID-19, “they must not be abused as an excuse to crack down on journalists’ ability to do their work”.

Meanwhile, a UN independent human rights expert reported that since the start of the disease outbreak, he has received “alarming accounts” of retaliation against journalists, under the guise of spreading disinformation.

David Kaye, the Special Rapporteur on the promotion and protection of the right to freedom of opinion and expression, has documented these threats in his latest report to the UN Human Rights Council, which oversees his mandate.

Kaye underlined the critical role of a free press, especially during a health crisis.

In recent months, independent media has been “an essential lever for public information”, he said, with journalists uncovering stories of government deception while also helping people everywhere to understand the nature and scope of the pandemic.

Therefore, detaining journalists for doing their job runs in direct opposition to the obligation to ensure an enabling environment for the media, he said. Roughly 250 journalists worldwide are currently behind bars, according to data from the Committee to Protect Journalists.

“The criminalisation of journalism must end. That can start with releasing journalists from detention as a matter of urgency”.“At a time when disease outbreaks spread through detention facilities, detention’s cruelty is exposed, imposing an additionally excessive punishment that carries with it the risk of illness and death”, said Mr. Kaye, who is not a UN staff member nor paid by the Organization.

In his press freedom day message, the UN chief thanked the media “for providing facts and analysis; for holding leaders – in every sector – accountable; and for speaking truth to power”.

He particularly recognized those journalists playing “a life-saving role” in reporting on public health.

“And we call on governments to protect media workers, and to strengthen and maintain press freedom, which is essential for a future of peace, justice and human rights for all”, he concluded.