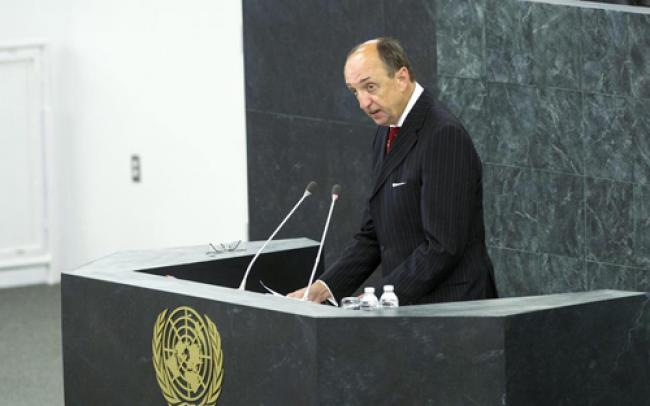 New York, Nov 1 (JEN): Senior officials from the top United Nations judicial body â€“ the International Court of Justice (ICJ) â€“ and from the International Criminal Court, briefed the UN General Assembly Thursday, highlighting the work of the courts over the past year tackling their respective cases.

“During the last 12 months, the International Court of Justice has continued to fulfil its role as the forum of choice of the international community of States for the peaceful settlement of every kind of international dispute over which it has jurisdiction,” Judge Peter Tomka, President of the Court said, briefing the General Assembly at UN Headquarters in New York. He said that the Court has cleared its backlog of cases and detailed for the Assembly the progress of as many as 11 contentious cases with which it dealt over the past year. The Hague-based body – often referred to as the “World Court” – held public hearings in and is currently deliberating three cases, a maritime dispute involving Peru and Chile, an interpretation of a 1962 judgement in the case concerning the Temple of Preah Vihear between Cambodia and Thailand, and the case concerning whaling in the Antarctic between Australia and Japan, with New Zealand intervening. The Court also delivered two judgements this year, the first in a territorial and maritime dispute involving Nicaragua and Colombia, and the second in the frontier dispute between Burkina Faso and Niger. In addition, the ICJ delivered six Orders in other cases. “It should be emphasized once again…that, since the Court has been able to clear its backlog of cases, States thinking of submitting cases to the principal judicial organ of the United Nations can be confident that, as soon as they have completed their written exchanges, the Court will move to the hearings stage without delay,” he told the Assembly. Also briefing the Assembly was Judge Sang-Hyun Song, President of the International Criminal Court (ICC), who provided an update on the eight situations before the Court Uganda, the Democratic Republic of the Congo (DRC), the Central African Republic (CAR), Mali, Kenya, Côted’Ivoire, the Darfur region of Sudan, and Libya. “The ICC has attracted considerable international attention in the past months, especially in Africa. Some voices have urged the Court to show flexibility on certain issues,” noted Song. “I would like to underline that while the ICC will naturally try to find practical solutions to the challenges it faces, such solutions must be consistent with the legal framework set by States in the Rome Statute.” With regard to Kenya, the ICC Thursday decided to postpone the trial of Kenyan President Uhuru Kenyatta, which was set to begin on 12 November, to 5 February 2014 to allow further time for preparation of the case. Kenyatta is charged, as an indirect co-perpetrator, with five counts of crimes against humanity consisting of murder, deportation or forcible transfer, rape, persecution and other inhumane acts allegedly committed during the post-election violence in Kenya in 2007-2008. The ICC is an independent, permanent court that tries persons accused of the most serious crimes of concern to the international community as a whole, namely the crime of genocide, crimes against humanity, war crimes and the crime of aggression. Song reminded Member States that the issues which engage the ICC’s mandate have tremendous societal and political significance in the countries concerned. “ICC decisions will often be welcome to some and disappointing to others. But the reasons driving the Court’s decisions are always legal, not political. “In five years’ time, many ad hoc courts and tribunals will have closed their doors. The ICC’s role in the global efforts for peace, security and the prevention of mass atrocities will be even more pronounced than it is Thursday.”