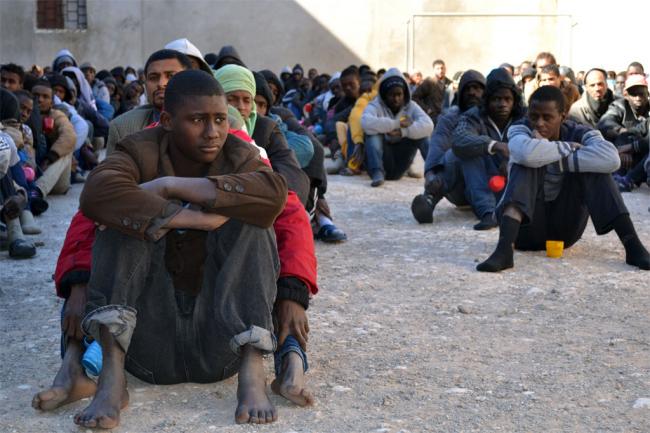 New York, Apr 25 (JEN): The Office of the United Nations High Commissioner for Human Rights (OHCHR) on Friday condemned the â€œsuccessive horrific incidentsâ€ in Libya this past week â€“ ranging from the appalling loss of life in the Mediterranean of those escaping violence, the execution of Christians and the killings of several members of a prominent family by the so-called â€˜Islamic State in Libya.â€™

“We have been shocked by the appalling loss of life in the Mediterranean Sea, following the reported deaths of several hundred individuals seeking to escape the violence in Libya,” OHCHR Spokesman Rupert Colville told the bi-weekly UN press briefing in Geneva. “Many of those fleeing Libya are migrants, refugees, and asylum seekers in an extremely vulnerable situation in Libya. Amidst the violence and breakdown in law and order, they are at risk of killings, torture, abduction, and physical assault,” he explained. Colville said that following visits to a number of detention centres inside Libya, the human rights division of the UN Support Mission in Libya (UNSMIL) had reported conditions of grave concern including chronic overcrowding, poor sanitation, health care, and insufficient food. “The division also received consistent reports of physical or verbal mistreatment, labour exploitation, sexual violence, and confiscation of identity documents,” he said. The human rights spokesman also noted that reports were received of the death of several members of the prominent Al-Harir Al-Mansouri family by individuals affiliated with the so-called ‘Islamic State in Libya.’ “It was reported that armed men attacked the family’s residence after Ibrahim Al-Harir al-Mansouri resisted arrest,” he explained, adding that “three members of the family were publicly hanged in the city” in an apparent bid to send a message to those challenging the group. Also this week, Colville said, a group affiliated with the Islamic State in Libya released a video showing the execution of at least 28 Christians in two separate incidents. “We condemn the brutal killings of these individuals who we understand are mostly Ethiopian nationals and who appear to have been targeted on the basis of their religion,” he said. He added, “In February of this year, the High Commissioner condemned the beheading of 21 mostly Egyptian Coptic Christians, and further urged Libyans to unite against extremists launching attacks based on religious, ethnic, national, racial, or political grounds and we reiterate that call today.” Colville urged all parties in Libya involved in talks facilitated by the UN to redouble their efforts to reach an agreement as soon as possible so as to begin the process of rebuilding institutions that would ensure the rule of law and the protection of human rights for all those residing in Libya. Photo: Mathieu Galtier/IRIN