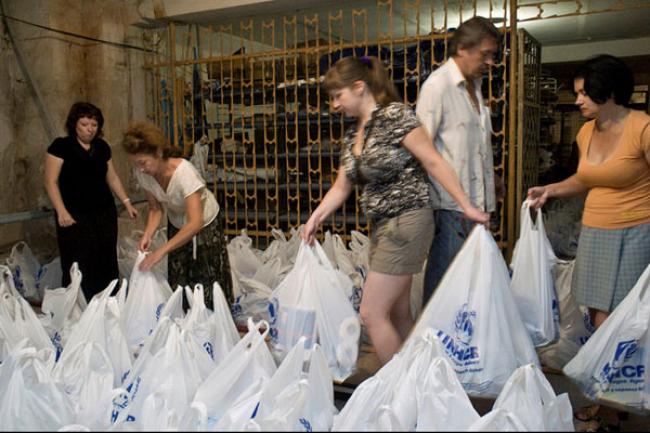 New York, Nov 22 (JEN) Key steps have been taken recently to deliver food vouchers to some 10,000 internally displaced people in the Donetsk region of Ukraine, the United Nations World Food Programme (WFP) reported on Friday, while underscoring that ensuring access to food in the countryâ€™s crisis-gripped eastern region remains a â€œpriority concern.â€

“The initial round of food voucher distribution has injected close to half a million dollars into the economy of local host communities,” Elisabeth Byrs, WFP spokesperson, highlighted in a briefing to journalists in Geneva. She also explained that the vouchers, through partnerships with non-governmental organizations and a foundation, will help feed 120,000 people over the next six months. According to  Byrs, the families, mainly displaced because of the ongoing fighting in the region, can redeem the one-off vouchers which worth $45 from local shops. Of particular concern, however, is access to food throughout the conflict-hit eastern region. Families have growing difficulties in keeping sufficient and nutritious food on the table, due to high unemployment, hard currency deficiency, growing inflation and increased food prices. Further, WFP expects this situation to worsen as winter approaches. “Since early September WFP has reached more than 30,000 vulnerable individuals in eastern Ukraine,” said  Byrs, adding that it “includes distributions of mostly ready-to-eat food parcels.” So far, the Government of Ukraine’s State Emergency Services has registered over 450,000 displaced people, while approximately more families are displaced but have not yet registered. The majority of vulnerable people are staying in collective shelters or with other families. According to WFP, many of them left their homes quickly with limited or no resources and were unable to access their bank accounts or entitlements.

Local volunteers prepare humanitarian aid in the cellar of the Sloviansk public library, Ukraine, which serves as a warehouse and collection point for UNHCR's aid delivery. Photo: UNHCR/Iva Zimova