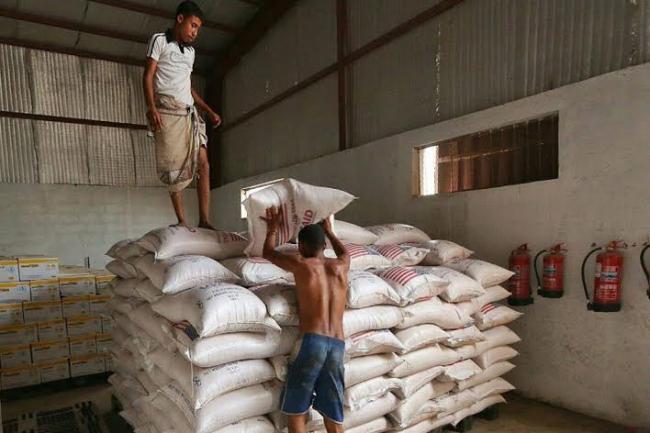 New York, Jul 31 (JEN): The United Nations World Food Programme (WFP) has begun distribution of food to around 340,000 people in eight of the worst-affected areas of the southern Yemeni port city of Aden.

“We are challenging the odds to reach tens of thousands of people who would go hungry without food assistance. We are working to overcome insecurity, checkpoints and many other hurdles in Yemen to reach desperate families unable to feed their children,” said Muhannad Hadi, who is the WFP Regional Director for the Middle East, North Africa, Eastern Europe and Central Asia. WFP partners are distributing two-month food rations – including wheat flour, pulses and cooking oil – in a number of districts that had not been reached since April because of the conflict, points outs a press release issued on Thursday. Three WFP-chartered ships delivered food assistance to the port of Aden last week, carrying a total of 6,800 metric tons of food – enough to provide emergency assistance for some 400,000 people for a month. Since April, WFP has reached some 2.6 million conflict-affected and severely food-insecure people in 13 of Yemen's governorates. In July so far, almost 700,000 people are confirmed to have received WFP emergency food assistance. On 22 July, the WFP-chartered MV Copenhagen docked in Aden with half a million liters of fuel – the first fuel vessel to reach the port since the beginning of the conflict in late March. WFP requires 1 million liters of fuel each month for its operations in Yemen. Even before the war broke out, Yemen imported almost 90 percent of its basic food from abroad. The impact of traders being unable to import enough food and safely move it inside the country has led to a severe spike in prices, which is increasing the suffering of the poorest and most vulnerable. Many road networks in and around Aden are currently now either inaccessible or very difficult to reach due to infrastructure damage and fighting. Aden airport is also still not open to commercial and humanitarian flights, WFP added. WFP is the world's largest humanitarian agency fighting hunger worldwide, delivering food assistance in emergencies and working with communities to improve nutrition and build resilience. Each year, WFP assists some 80 million people in around 75 countries. Photo: WFP/Ammar Bamatraf